Surf and Cook in Galapagos and on Ecuador’s Coast 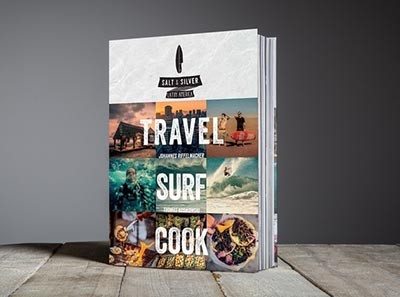 traces the journey of Johannes “Jo” Riffelmacher and Thomas “Cozy” Kosikowski as they travel through Central and South America—reporting on all the best surfing locations, chronicling the stories of local surfers and restaurant owners, and compiling recipes representative of each area.

This eclectic and off-beat travelogue immerses readers in the local culture of eight Latin American countries, taking them beyond the usual tourist destinations.

From Cuba’s surfing community to Mexico’s urban graffiti scene to the fishing villages of Nicaragua, the dynamic duo explores the beaches and waves, as well as the kitchens, of each location.

Interspersed throughout the pages of the trip are more than 90 regional recipes, over 250 stunning photographs and a wide array of tips and stories ranging from social commentary on the Cuban surf scene to pointers on how to rent a “Hamaquera” in La Ticla, Mexico for $3 a night.

Written for travelers who would rather collect experiences (and tattoos) than souvenirs, Salt & Silver is the ultimate guide to a bohemian adventure.

Excerpt from the book: Surfing Galápagos

From Canoa, we rode to Guayaquil, the second largest city in Ecuador, where you can get a really cheap flight to the Galápagos Islands. We got on a plane and landed on San Cristóbal about two hours later. Once there, we could think of only one word to describe the place: paradise. Everywhere we looked there were wild animals, and almost none of them were afraid of people.

When we disembarked from the taxi boat, we had to climb over a herd of surly, half-asleep bull sea lions, who acknowledged us with a few unenthusiastic grunts. To the left, big black lizards watched us from the quay wall.

Bright red crabs the size of plates bustled over the rocks on the beach. Several blue-footed boobies and pelicans flew near our heads. It was as though time had stood still. At first glance the small fishing village of Puerto Baquerizo Moreno seemed to be frozen in colonial times.

In the evenings, everyone sat at tables on the same street and chomped on 4-pound (nearly 2 kg) grilled lobsters or fish or pots of mussels, accompanied by cold beer and lots of laughter. We stayed in a small inn for $13 apiece and went surfing at the first sign of daylight, always in the company of a herd of sea lions. They enjoyed splashing around us and surfed a few waves themselves.

Below us, we saw sea turtles peacefully plucking algae from the black lava rocks on the bottom. Whenever we temporarily had our fill of waves, we explored the island’s interior. There we found an area full of tortoises. These were unbelievably massive prehistoric animals, about 170 years old and weighing 660 pounds (300 kilograms), wheezing like ancient steam engines. Say what?

There are some damn good surf spots on San Cristóbal. The most difficult and best wave is La Loberia. Loberia basically means “sea lion colony” and, like the name says, you share the waves with a herd of sea lions.

Unfortunately, the sea lions aren’t the only ones you share the waves with—which is why none of the locals like to surf there. The area around the Galápagos Islands has the world’s largest population of sharks. Hammerheads, bull sharks, and tiger sharks are constantly making the rounds. And guess where their favorite hunting ground is?

La Loberia, of course. That’s what we were told by Raúl, an Ecuadorian surfer I’d met at another surf spot called Tongo Reef. But the wave forecast for La Loberia was so good, we ignored the shark risk and arranged to meet at six o’clock the next morning.

We started out at first light. It was freezing cold and we were dead tired. We were the only people on the beach. Perfect waves.

Not a single sea lion in the water—they were all hanging out on the beach. Now, why might that be? We knew very well, but we didn’t want to think about it too much. We stood there for half an hour, just staring at the water.

Although it was unbelievably clear, the black lava rocks on the bottom made it hard to see below the surface. The combination of clear water and black bottom gave us the creeps. Raúl said:

“Now you know what I mean. Here, you always have the feeling that there are predators lurking.”

Yeah, I knew exactly what he meant, and my stomach was not happy as I paddled out to a wave. As I sat waiting for the next set, I felt like I was being served up on a platter.

As I sat on the peak and waited, I stole glances at the water, trying to detect any suspicious movement. The first big wave finally came. Raúl was in a somewhat better position, so he took it—an awesome wave—and surfed about 330 feet (100 meters toward the beach.

So now I was alone. I stared at the horizon as though I could conjure up a wave through sheer willpower, but the ocean wasn’t cooperating. I heard a bubbling in the water behind me and whipped my head around, but I was too late.

About 32 feet (10 meters) away I saw a small whirlpool and imagined I could see a dark shadow passing beneath it. The surface was too rough to recognize anything specific, but my imagination filled in the gaps.

Although the water was only 57ºF (14ºC), I suddenly felt hot, like I was sitting in a pot of boiling water. I was totally still, even forgetting to breathe. Again I saw a dark shadow shoot past. This time I was absolutely sure—what the hell!?

I looked anxiously for the next wave but there were none in sight. Suddenly everything went very fast; a black bulky creature shot out of the water right next to me and landed on the surface with a huge splash.

A second later, an enormous head surfaced and a bull sea lion sat lazily staring at me. Leaning his head to one side, he started to grunt and bleat. I could have sworn he was laughing at me! He was doing it on purpose! Sure, I was relieved, but I also felt like an idiot.

That clown continued paddling around me until a set of waves finally came our way. I took the first one, and as I paddled back to the peak, I saw the sea lion surfing the next wave toward me. A cool dude. We pushed everything else out of our heads and surfed our best session ever until we’d worn ourselves out. Sharks?  What sharks?

Johannes (Jo) Riffelmacher first discovered his passion for cooking as a young child in his parents’ kitchen in Bavaria, where he learned the basics of various culinary cultures from two adept amateur chefs. Besides cooking, his second greatest passion is surfing.

Since his early youth he has spent every week he can travel to surf spots around the world. After graduating from Akademie U5, a school of graphics and communication design in Munich, he set off on a world tour equipped with surfboard, backpack and cooking knives.

After seven inspirational months traveling through Canada, the United States, New Zealand, Australia, Indonesia and Hong Kong, he returned to Germany, where he began working in graphic design at the renowned Matt/Alster advertising agency, starting as an intern and eventually reaching the level of Senior Art Director.

While at Jung von Matt, Riffelmacher received numerous national and international creativity awards and developed ad campaigns for brands such as Mercedes Benz, MTV, and Ricola.

After four and a half years, he left Jung von Matt to work on the travel, cooking and surfing project “Salt & Silver” together with photographer-cameraman Thomas Kosikowski. Born in Eichstätt, Bavaria, he plans to live on the road.

Thomas (Cozy) Kosikowski has been interested in photography since childhood, thanks in part to his father’s influence, and has been working as a freelance photographer ever since he finished school. His main influences have come from skateboarding, rap, and graffiti.

He gradually became interested in moving images, which led him to study cinematography in Hamburg. As an intern at the Mamma Team promotional film production house in Barcelona, he acquired the discipline and conscientiousness necessary for succeeding in the business—and it was also one of the best times in his life.

Cozy’s love of cooking also originated in his youth and has been developing ever since. For many years, Cozy and Jo have been cooking together for friends, family, friends of friends, and anyone else who wants a taste.

Their desire to work together on a project that included both cooking and travel and that drew on the specific talents of both friends, finally led to the “Salt & Silver” project, which for Cozy is a dream come true.