It’s hot. Very hot. Nothing moves on this parched, sun splashed landscape save a hovering vulture, a scurrying gecko and the flaxen dirt disturbed by our circumvolving tires and falling beads of sweat.

Pedro’s GPS delivers the somber news: the mercury is pushing 40 degrees C (104F)and many more pedal strokes will be needed to reach the apogee of this section of trail. Salt stains have turned my once-blue jersey into a harsh display. It’s well past malodorous.

The long, hairy downhill out of Castelo Rodrigo, after our afternoon repast, which bounced me around as if I was in a steel-cage match with Hulk Hogan, is now a distant, cherished memory.

Fifteen punishing minutes later, under a forceful sun, another downward slope mercifully appears. Pedro screams down with bravado as if the tract is clear of clutter. Crossing several valleys, today’s ride is no different than most here – oscillating between ascents and slavering descents.

There’s barely a moment to shake out my hands and bellow out a ‘wahoo’ at the bottom when the climbing begins again lethargically. Dirt has given way to ill-matched cobblestone.

Plagued by dehydration and a world-class case of saddle sore, I’m moving about as fast as a tortoise with nowhere to be. 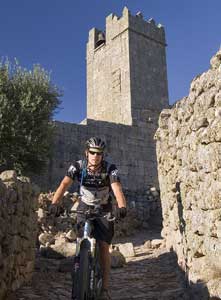 “Are you sure they’re at the top,” I sullenly quiz Paulo, who’s a few bike lengths closer to the crest, well aware that a trend has occurred: rides start and end at the castle. And, as defenders of land and dwellings, castles such as the one here in the Centro de Portuguese village of Marialva were built way up for a reason. To make conquest a more difficult undertaking for both the sword-wielding and, unbeknownst to the Romans, the spandex clad sect.

Here, within a complete circuit of twelfth-century walls, I’ve resolved that I’m taking part in one serious ride.

Call it an attempt to draw some of the adventure-minded away from country’s well-trodden natural (and human-cluttered) emblem – its southern beaches. 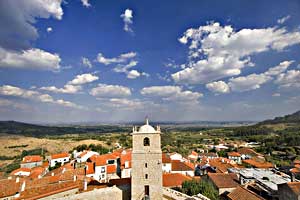 The Village of Castelo Novo.

I’ve been invited here to Portugal’s cultural heartland by local Grand Rota experts Pedro Pedrosa and Pedro Carvalho to experience for myself why there are rumblings that this circuit is destined to become one of Europe’s epic multi-day mountain bike adventures.

A few hours of riding from our launch point, Castelo Novo –- a small village adorned by granite two-story houses and winding mazy avenues where the seasoned denizens clap as we race by — and I’m rapidly becoming smitten by Europe’s most western nation.

Fresh-picked figs and blackberries are quelling my hunger pangs, the tract is generally flat, sprinkled with the occasional kamikaze downhill, and oak and cork trees provide relief from the humming sun. 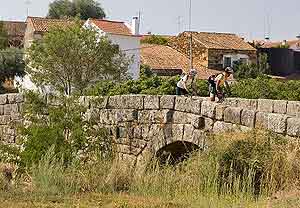 Portugal produces about half the world’s output of commercial cork and, although it can be harvested every nine years, it takes up to 40 for the bark to become commercially viable. Needless to say, this is not a get-rich-quick scheme.

“That bridge has a two thousand year warranty,” jocular Pedro P. proclaims as I finish pedaling over a bumpy Roman bridge heading out of Idanha-a-Velha, a remote former Roman stronghold founded one century before Christ that’s pleasantly set amongst olive groves and parched plains and once unceremoniously vacated due to a plague of rats.

He then makes a pronunciamento: “The climb into Monsanto is perhaps the route’s most arduous.”

I only get a few pedal strokes into this 200-meter (656-ft) clamber before I’m shamelessly off the bike. Someone with an abnormal sense of humor has decided the best route up to Monsanto is this long-forgotten, near-vertical rocky Roman path that lends itself to almost no momentum. 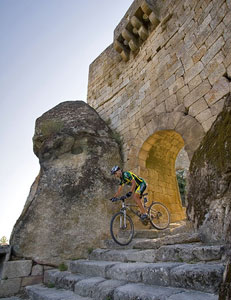 “The bicycle is the best way to enter into a location in a non-invasive manner. Using it, I want to experience the land of Portugal and hear the stories of the people who occupy it.”

Luckily for Gary, Monsanto is storybook Portugal. After catching my breath and loving every sip of a few cold beers shared with the mountain bike encyclopedia, I spend the next moments exploring the medieval village with a rep as Portugal’s oldest and most traditional settlement.

I wander among houses built into the mountain rock; pinched gray alleyways bring me to elderly women enthusiastically conversing perched on their steps and the outcome of a craggy path is a boulder-littered castle with views of the ubiquitous red roofs of the dwellings below and the vast surrounding undulating rockscape resembling worn molars of a shepherd that we’ll tackle one rotation at a time.

Registered Dietitian, Nutrition and Travel Writer, Professional Recipe Developer, Travel and Food Photographer, and Cookbook Author. Matthew Kadey has visited Ethiopia, Syria, Myanmar, Jordan, Ireland, New Zealand, Belize, Thailand, Sri Lanka, Laos, Cambodia, Nicaragua, Cuba, and Mexico. Many of these trips have taken place by bicycle. Sure points A and B are interesting, but it is what’s between them that is really exciting.

mattkadey.com
If this story has inspired you to travel, why not check out the prices to get there and make it happen? Search airfares, hotels, and rental cars here. Thanks!