The native people in Hainan, China’s southernmost and smallest province, are unique.  They share a history of outliving those on the mainland by several years.

So, what’s their secret?  I aimed to find out with friends Sanna (from Norway) and Gitte (from Denmark) on a 5-day adventure to Hainan, the Hawaii-like island in late November.

Our visa-free visit coincided with the 4th annual Hainan World Leisure Tourism Expo in the capital city of Haikou.  The once-thriving port city sits at the crown of the island.

Surrounded by towering apartment buildings, coconut trees, verdant mangroves, and golden beaches, we checked into the Shangri-La hotel.  The five-star is one of many luxury resorts scattered across Asia’s hottest holiday destination.

After unpacking our bags, we ventured across the street to the International Convention and Exhibition Center, the 2-day location for song and dance courtesy of the Expo.

Before heading inside, we were struck by the powerful aromas emanating from rows of food stalls heaving with exotic cuisine.

Fresh sea bream, taro root, shredded bamboo shoots, amberjack, a staple goat meat braised in coconut milk, even scorpion on a stick! The catch of choice is cooked up on-site and enjoyed sitting under an airy outdoor tent.

“The Li People were the island’s first inhabitants,” said Laila Liu, owner of Sinex Group International and the special advisor who invited me on this trip.   “They survived on primitive fishing in the shallow waters of the South China Sea.”

I tried a hot pot of poached freshwater carp in a sweet sauce.  The distinctive flavor was washed down with a rare herbal tea prepared by a Li woman at a stall inside the Expo hall. The loose leaves were collected from a plantation at the foot of the island’s highest mountain.

The tea is believed to possess many medicinal properties to help with high blood pressure, diabetes, and cholesterol.  The merchant brewed and poured us three small cups but she didn’t speak English.

Like many on this island, sometimes a smile is all that’s needed to demystify differences.  The detox infusion kickstarted our energy and before we knew it, we were doing cartwheels on the sandy beach outside the convention center.   Surprisingly, only a small handful of families enjoyed the azure blue sea that glistened in the sun.

The foodie fete continued in the evening at Haikou’s busy historic quarter on Qilou Old Street.  We wandered through charming pedestrian blocks featuring rows of shophouses and arcade-style buildings.

The perfectly-preserved architecture illuminated by passing silent electric scooters dated back to the 13th century with modern conveniences in effect.

A cashless system of QR codes and the WeChat wallet app allows customers and vendors to quickly expedite transactions.

Turns out, the innovative app isn’t just for social media; it’s the default currency used by nearly everyone in China!  (The mobile app proved troublesome for me to launch using wifi so I suggest paying for an international data plan before you leave home).

Laila scored an empty cafe table that spilled out onto the street where we celebrated our good fortunes with bottles of vintage red served in special occasion 2-ounce glasses similar to baijiu glasses.  Laila had invited the vintner to join us to explain the long history of wild grape wine consumption and popularity in China.  The acting sommelier was super generous with his pours and we bonded late into the evening.  It doesn’t get much more authentic than that.

Like the island’s cuisine, odds are good that the rich biodiversity has also attributed to the well-being of the locals.    Next up on our itinerary was a visit to the volcanic crater at the Shishan Volcanic Cluster National Geopark, (also called Haikou Volcanic Park), one of 40 dormant volcanoes and caves on the island.

We hiked up, down and all around the rim of the extinct treasure listed on the UNESCO world heritage list.  It’s believed that the last eruption of Mount Yanjinglin was over 13,000 years ago so no worries.  Along the crater rim, I took in a breathtaking view of the countryside imagining how hot lava once camouflaged this beautiful land.

After the climb, we are treated to a stage show of traditional rituals by the Li People.  Their ethic identity captured in song and dance; a memorable performance accented by rhythmic clashing bangs and chants.

The dancers jump fluidly and gracefully at the moment when the bamboo poles split and close. Gitte and I were invited on-stage to test our leaping skills and sense of balance.

Given how many natural geysers, spas, beaches, and lagoons make up Hainan island,  no trip here would be complete unless one’s skin shrivels up like a raisin.  But that’s a good thing!

Because of the ubiquity of geothermal activity, an accommodation called the “hot spring hotel” is both affordable and plentiful.

Haikou’s Shangri-La and the next two hotels: the Holiday Inn Resort in Qionghai Guantang and Crowne Plaza in Sanya City Center, nourished our ‘inner-fish’ with countless swimming options.

Late into the evening, under a canopy of fragrant frangipani palms, we bobbed like wine corks in the hot spring baths of the newly-opened Holiday Inn near Meiling Lake.

Temperatures ranged from hot (90-degree Fahrenheit) to cold (70 degrees Fahrenheit) each with a unique infusion of aromatherapy like cherry blossoms, coconut and cocoa leaves.

I took to the water like a fish.  I could feel the impurities and stress cleansed free while I bounced from one tree-lined outdoor tub to another, a dozen or more in total.   The larger swimming pool included a series of faux waterfalls and rock walls imitating the wild tropical woodland that surrounded it.

Under a sky of stars from my hotel balcony, I listened to hear the call of the endangered Hainan Gibbon that’s said to roam this part of the island. 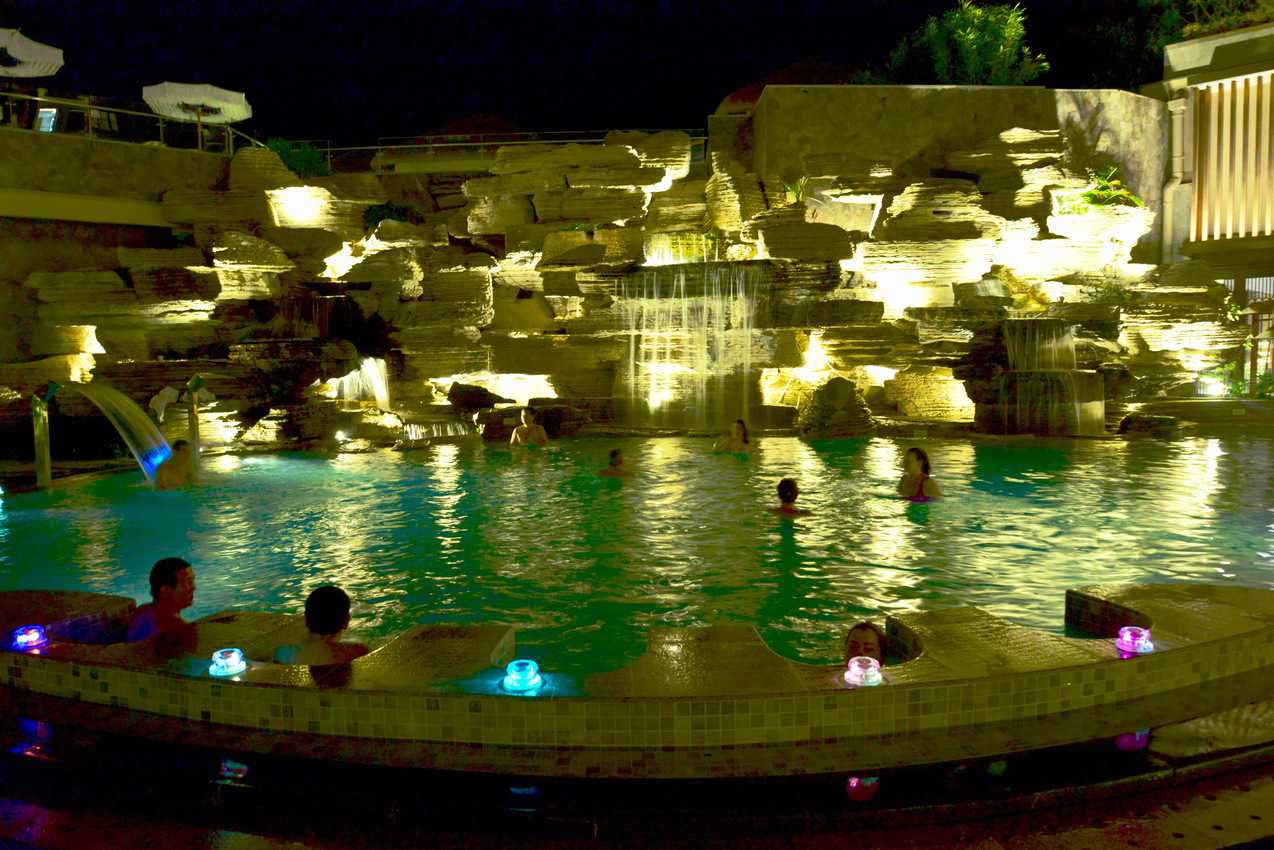 The Future is Now in Sanya

Dominated by hypermodern skyscrapers, hotels and shopping malls, the southern island city of Sanya is the innovative equivalent to a famed sci-fi metropolis but without the dystopian narrative.

A sprawling large-scale vision of Dubai or Singapore comes to mind.  The city was built up only in the last 15-years.

Sanya boasts extraordinary technological innovations like A.I., virtual reality, holographic projection, and somatosensory systems.  All these high-tech wonders are on display as we board a scenic boat tour in Sanya Bay at sunset.

The 70-minute roundtrip harbor tour circled bays, bridges and artificial palm islands illuminated by a blinking neon skyline.   Views of Phoenix Island with its five high-end 28-story buildings was the highlight.  The skyline is truly epic. I enjoyed panoramic views of it and Dadonghai Bay from my hotel bathroom floor-to-ceiling window.

The next morning, we returned to Haikou, not by bus, but via a high-speed bullet train.   Traveling at a whopping 175 mph, the ride was so smooth we happily sipped our signature Hainanese coffees without spilling an ounce.  We passed the plantations outside the window in a blur.

Interested in visiting?  The following links can help you plan:

Shangri-La Hotel and Resort in Haikou