Montreal: Watching the Habs with My Girl

While travel means something different for everyone, for me, at its best, it’s about more than simply checking boxes off a bucket list.

Travel at its best is 100% about making connections to places and shared experiences with people.

Even the simple yet iconic, father-son, sports road trip.

It often marks a coming of age. It’s a chance for young guys to hang with the men and supposedly, do adult things, away from a framework of everyday life.

It taught my son Ben how to keep quiet at the border and mind his manners in hostile crowds. For us, the road trip from our Toronto home to NFL and MLB games in Buffalo and Cleveland provided memories and experiences that we both cherish.

But What About Katie?

But I have two children, Ben and Katie. I’m no more passionate about one than the other and have always treated them as equally as a parent can. I coached both their ice hockey teams, for seven years each, and despite my efforts to never favor one experience over the other, coaching my daughter team was significantly more fun.

Girls play for the love of the game and the dressing room banter, not because they think they’ll make the NHL. My daughter was an exemplary student.

She worked hard on the ice, always returning to the bench after a shift, with a smile for the coach. That’s where our hockey bond began.

As an ex-Montrealer I’ve done my best to make Ben and Katie honorary Montrealers despite the distance.

By that I mean, fans of the iconic hockey team that plays at the Centre Bell Arena, a little more than 500kms away, and not the local Maple Leafs of Toronto.

I decided recently it was high time to rethink the traditional father-son road trip and make a pilgrimage with Katie. At 24, the chance to spend time together seems even more precious as she moves on with her life.

Montreal is far less a destination than it is a culture and way of life. It is passion compared to Toronto’s function. Montrealers work to live, Torontonians live to work. And there are few things that denote true Montrealers more than the ice hockey team they live and die with. The Habs are it, they ARE hockey. Nothing else really matters to Montreal hockey fans.

“Le bleu, blanc et rouge” (blue, white and red) Montreal Canadiens. In Quebec, the Canadiens are a religion. Our father-daughter road-trip would be travel in the most meaningful way, spending time together around shared passions.

They say “the journey’s as important as the destination” but please, indulge me. Allow me to skip the details of driving Canada’s coast-to-coast highway, the 401 for the six hours between Toronto and Montreal.

It’s as boring as one can imagine. Thank goodness for the time to chat and to catch up in ways that texts just can’t. I’ve always had the best conversations with my kids while driving. This was no exception.

Katie dons her Carey Price, #31 jersey (he’s the all-world goalie of the Canadiens) and I pull on my Canadiens hoodie. Both will hide under layers of winter jackets until game time.

Katie’s Montreal-indoctrination begins with lunch at one of my favorite smoked meat restaurants, Moe’s. There’s no sharing going on today.

This is the real deal. I wish I knew what they do to smoked meat in Montreal that makes it so sumptuous, Maybe it’s the spices?

Fresh enough that you know it, but not so fresh that it falls apart from the moistness of the meat. The smoked meat, the pile of twice deep-fried french fries and the obligatory tub of coleslaw. The experience evokes memories from my past. It makes Katie smile because she understands how I feel.

To work off our lunch, we take a walk around Old Montreal. We have a couple of hours before the will-call window opens at Centre Bell, and Old Montreal is but a short walk away.

Old Montreal’s an area of the city that sits directly on the St. Lawrence River, and still features the cobblestone streets of eras past. In summer it’s fantastic for buskers, cocktails on patios, and people watching. Year-round there are art galleries to visit and unique boutiques to shop.

And in winter, the streets are tastefully lit for the season. We walk, shop, and chat, loving each other’s company but with one eye on the time.

We’re fast walkers. We estimate a thirty-minute walk away, at our pace, which on this day was a bit faster than usual. We arrived in fifteen. As we approached the arena, the excitement is palpable. Crowds fill the streets and bars are easy to see from the line-ups of fans in red jerseys, hoping for a table to watch the game from. We get our picture taken by the #GOHABSGO sign, a chant the two of us have belted out ever since she was a child.

The rink is a shrine to the glory of the past and the hope for tomorrow. The Canadiens haven’t won the cup since 1993 but they are getting better. We want to do and experience everything.

We must have traditional Forum hot dogs, named for the arena the Canadiens played in through their glory years. The hot dogs are steamed and then placed in a bun that’s toasted on a sandwich press. Amazingly good for something so simple, or am I tasting great memories? Does it matter?

With minutes before the puck drops to start the game, we head to our seats. We want to hear the National anthem. We want to experience the anticipatory buzz of a crowd.

A crowd that believes it can will a team to victory. And there we are. On hallowed grounds, together, with smiles from one ear to the other.

At the end of the first period, our team is up 3-0. We make our way to a picture opportunity, a mock locker room set-up, where we don helmets and gauntlets for the shot.

We have a beer, Molson’s the beer of choice for many in Montreal. The Molson family owns the Canadiens. Before we know it, back to the game.

Montreal scores quickly, 4-0. The crowd’s beyond loud. Katie and I stand and chant with 21,000 fans as the organist incites the arena to a fever pitch. But then the New York Rangers score, a few times. Things get quieter.

Between the second and third periods, we visit the gift shop where we stand paralyzed by the options.

We’re a little concerned about the outcome of the game as the Rangers have given the home team more than a challenge. There’s tension in the air. The crowd’s gone from raucous happiness to worry. No matter what lies ahead, we have each other to lean on.

The game ends disappointingly, 6-5 for the Rangers. We push our way through the crowd on our way to the subway. It’s a quiet ride. The same fans in Canadiens jerseys who hooted and hollered their way into town, now plant their faces into their smartphones on their way out.

Kate and I have been here before. In seven years of coaching and playing, you’re bound to lose a few.

You learn how to recover and put the losses in the rear-view mirror. We don’t have to say much, just look at each other and smile. It’s a road trip that won’t be forgotten. Precious time and experiences shared. It’s travel at its best and we still have the long drive home to enjoy. 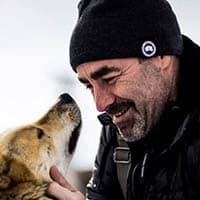 Kevin Spreekmeester has been a senior marketing executive with a background in advertising, marketing, photography, and photojournalism for over 30 years.  His stories and images have appeared National Geographic, British Journal of Photography, The Globe and Mail, the Detroit Free Press and many others. He lives in Mississauga Ontario.

Read another story by this author, about his Tipsy Adventures on the Coast of Scotland.