Sand dune, sea oats, and evergreen trees. When I look back from the water’s edge at Coquina Beach, on Anna Maria Island, that’s all I see. No high-rise condo buildings or hotels, no concrete boxes looming over the sea.

If it weren’t for the modern playground near the snack shop, this scene could be from a 1940s postcard.

In the early days of Florida’s development, there were lots of laid-back beaches like this, where families rented a little apartment for a week and spent time reconnecting through days on the shore.

Then came waves of retirees from the U.S. and Canada, all looking for a place to wile away not just a week, but the rest of their lives. Quaint little beach bungalows were cleared for larger developments, high-rise condo projects were sold out before even being finished, and any plot of land close to the water doubled in value every few years.

Florida’s population swelled from 9.7 million in 1980 to 16 million in 2000 and has been going up at the rate of about a half million a year since. Forget about finding a secret little beach to kick back on for a week.

The Gulf Islands of Florida, at the bottom of Tampa Bay, have fought off the twin temptations of massive tourism development and large-scale retirement development, however. They have managed to retain the feel of a laid-back old Florida.

The largest hotel on Longboat Key, the Hilton, has only 102 rooms. The largest one on Anna Maria Island has only 49 rooms. Anna Maria Island, at the bottom of Tampa Bay, takes its “no high-rises” stance seriously. No building in the entire area is more than three stories tall.

In most parts of the state there’s a serious disconnect between what’s pictured on the glossy brochures and what visitors see with their own eyes.

Showing thousands of senior citizens emerging from their high-rise retirement condos to drive badly and fill the restaurants at 5:00 p.m. is not going to help Florida remain the top tourist destination in the world. In this area, however, there’s no hidden society. It really is all about beach strolls, quaint little restaurants and houses, and manatees.

This is a family place in the old-fashioned sense. Family vacations here feel like ones before the days when parents decided every hour needed to be scheduled, the days before kids decided that a place without a video game arcade, a go-cart track, and a multiplex cinema was no fun at all.

“What’s there to do here?” some poor brat is probably whining right now. There’s a big open beach with hardly anyone on it kid. Go figure it out yourself.

This doesn’t mean there are no diversions, however. There are two places to go see the giant manatees that thrive in the area. In nearby Bradenton, the South Florida Museum hosts Snooty, the oldest manatee in captivity. 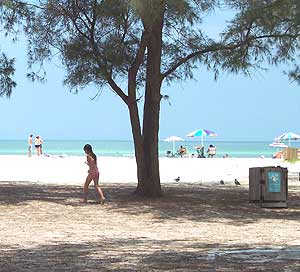 Looking through the trees to Coquina Beach, Anna Maria Island

The rest of the museum contains historical exhibits (including a mastodon skeleton) and a planetarium. Right off of Lido Key, on the southern end of the Gulf Islands, there’s the Mote Aquarium. Part museum, part research center, it’s a good spot for everyone to get up close and personal with manatees, sharks, sea turtles, and dolphins. There’s even a touch tank where you can feel some slimy manta rays as they swim by your hand.

For above-water creatures, stroll next door and see the Pelican Man’s Bird Sanctuary,
a rescue and rehabilitation center housing more than 200 birds. Or visit Durante Park on Longboat Key to walk in the mangroves and see critters and waterfowl.

As expected, fishing is a big deal here. You and the kids can toss in a line off the many piers, but for a more memorable experience, several charter companies run half day or all day deep-sea fishing trips. It’s not cheap, at $40 to $100 per person, or $600-$800 to charter an entire boat, but they supply you with everything and clean all the fish you catch.

For families with smaller children, several companies run pontoon boat rides to an island beach. Cast a line off the side on the way, then go snorkeling off the shore after arrival. With Cortez Kat, this trip is $25 for adults, $15 for kids. If you are an experienced boater, you can charter your own and rent water skis to go with it at one of the many marinas. 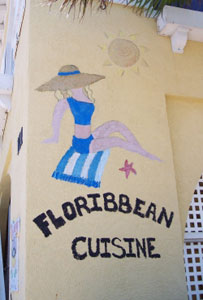 When it’s time to eat or drink, let’s hope you like Jimmy Buffet. Wherever you go for lunch or dinner, the patron saint of Florida will probably be on the sound system. A trio of popular waterfront restaurants is a good bet for cocktails and typical seafood fare: Beachhouse, Sandbar, and Mar Vista. At the first two, you can watch the sun go down while dining on the deck, then walk straight out and stroll on the beach afterwards. All are casual and kid-friendly.

For more refined dining, head to the centrally-located Sun House Restaurant, which does a great job of combining flavorful ingredients into “Floribbean Cuisine.” Try the Bahamian Spicy Seafood Chowder and follow it up with Floribbean Pork Loin, enhanced with Caribbean spices, island rum and plantain chutney. The restaurant is part of a complex that includes a day spa and suite apartments for rent.

Lodging choices on the keys are refreshingly diverse and distributed. They range from simple motels and condo rentals to extravagant villas for rent. The high season is generally February 1 through mid-April, so if you visit outside of that window you can save 15-50 percent. As would be expected, beachfront places and those built recently command the highest rates, so staying a block or two from the water can result in big savings and more space.

We stayed at The Cedars on Longboat Key. This is a tennis club with condos, where owners rent out their units to guests. It was too hot for tennis in late June, but the large pool was inviting. The condo was actually a large townhouse, with a garage on the ground floor, two bedrooms, two baths, and a great screened-in porch overlooking the sound.

At weekly rates starting at $925, a place like this comes out about the same as staying in a hotel, but with a full kitchen and far more space for a family. There were even beach toys and chairs to use.

The place also came with beach cruiser bikes in the garage, which seemed appropriate for this laid-back atmosphere. Pedaling down to the local grocery store, lazing around on the beach, kicking back by the pool. So this is what families used to do on vacation! On the Gulf Islands of Florida, it feels perfectly natural.

For more information on the region, visit: