Rough Guides Travel The Liberation Route Europe directs you on the liberation route of the Allied soldiers as they liberated much of Europe from Nazi control in 1945. The Liberation started with the invasion of Sicily in 1943 and swept through Italy, the United Kingdom, France, Belgium, Luxembourg, the Netherlands, Poland, the Czech Republic, and culminated with the capture of Berlin in 1945.

Excerpt from the book

The US Seventh Army landed three divisions on beaches in the Gulf of Gela: at Scoglitti, Gela, and Licata.  Some of the first troops sent ashore were Italian-Americans, who proved invaluable during the build-up and implementation of Operation Husky.  These men supplemented military intelligence with personal recollections and were able to communicate with locals and help stabilize the newly liberated Italian territories. 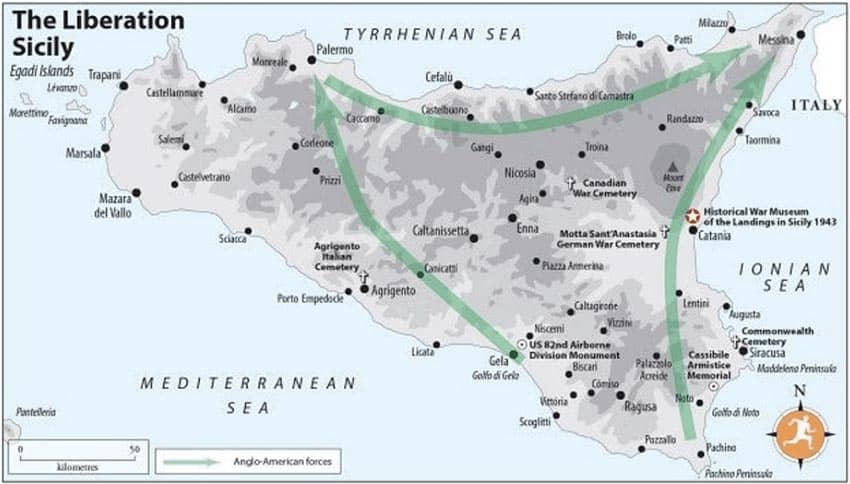 Along the coast today, from Porta Aurea at the Valley of the Temples to the street of Vittoria, through Licata and Gela –you can see a number of surviving military structures including bunkers, strongholds, trenches, and pillboxes.  Several somber plaques record mostly individual deaths or combatants, while there are two war monuments in the town of Gela itself.

The 82nd Airborne Division of the US Army faced determined opposition at Ponte Dirillo on the night of 10 July, where they were heavily outnumbered by the German and Italian troops and their tanks.  This monument, a large stone tablet located near Gela on the way to Punta Secca, commemorates the 39 paratroopers who died in battle.

There are three Italian war cemeteries on Sicily.  Besides this one in Agrigento, two others are located at Catania and Acireale on the east coast.  Between them, they contain the graves of more than four thousand soldiers who died defending the island.

In the prelude to Operation Husky, Sicily’s capital was badly bombed, but to little end.  Palermo was more symbolic than a useful prize, and the US Seventh Army, who advanced from its landing beaches to take the city, met minimal opposition.  Nevertheless, the assault provided useful publicity and a welcome boost to morale.  General Patton occupied the grand Palazzo Reale for a few days while he prepared his advance on Messina.

One of the fiercest battles of the Sicily campaign was fought for control of the small inland town of Troina between 31 July and 6 August in 1943.

Many inhabitants survived in squalor in the crypt of the cathedral; the scenes of horror and destruction that greeted the US liberators would be repeated in countless towns all the way up the Italian peninsula.

The end of the battle marked the breaching of the Etna defensive line, but the Germans managed to make an orderly retreat from Troina before the arrival of US troops.

The British Eighth Army was assigned a series of beaches on the Gulf of Noto, south of Siracusa.  Canadian forces came ashore on the west side of the Pachino peninsula; the rest of the Eighth Army landed on stretches between the tips of the Pachino and Maddelena peninsulas.

A few memorials stand sentinel in and around Pachino, and at one beach, Fontane Bianche, there’s a modern holiday resort.

Located on Via Fiume Cacipari, Cassibile

A plaque next to the church in Cassibile records the signing of the Italian armistice in a military camp near the town on 3 September 1943, which brought hostilities with the Allies to an end.  Preliminary negotiations were undertaken in Lisbon, but the terms were finalized here in Cassibile, with future British Prime Minister Harold Macmillan playing an important role in the process.

The armistice and its terms were kept secret for five days as the Italians bought time to prepare for the German backlash.  The delay also allowed the Allies to continue planning their invasion of mainland Italy without alerting the Germans to the Italian surrender.

British and Canadian forces made their landings in the southeast corner of the island, between Pachino and Siracusa, now the site of a Commonwealth cemetery.  The majority of burials belong to men killed during the landings or in the early stages of the campaign – including members of the airborne units that attempted to land west of the town on the night on 9-10 July, when gale-force winds forced sixty of the 140 gliders into the sea and blew others well wide of their objectives.  Altogether there are 1059 graves, 134 of them belonging to unidentified personnel.