London: Things You Can’t Get in NYC

After two years of living in London, England, I returned to New York to reboot my life.

When the initial wave of gratitude for the air-conditioned subway and lack of public urination wore out, I found myself roaming the streets of Brooklyn, missing all the little, and big, things that made my life in England’s capital so enjoyable. Here are just some of them.

I love art, but only in small doses. Luckily, London museums are free, which means you can come in and out as you wish, even if it’s just the bathroom you’re interested in.

My typical museum visit in London looked something like this: restroom, one hour of art, followed by cream tea. Repeat in a month.

What was that cream tea I was just having? It’s an English tradition of having tea with warm scones, served with jam and clotted cream–thick cream with a crust.

You can find it anywhere, from restaurants to museum cafes, but you can always tell a good establishment by the amount of clotted cream they provide. You hit the jackpot if your wife reminds you of your heart condition.

Speaking of pastries, they are everywhere in London and they are good (sorry, Dunkin’ Donuts). You don’t need to look for a bakery to enjoy them either. Just visit any of the Pret A Manger cafes, or step into a local supermarket and pick from a wide selection of daily baked goodies, all at affordable prices.

How about a fresh loaf of organic white bloomer for 90 pence?

Sure, New York now has a few more Prets (how the British call Pret A Manger), but here it’s just another overpriced cafe for a tourist to get ripped off at. English Prets, on the other hand, are legendary. Originally a London chain, it now boasts 237 stores in the capital alone, which means you’re never far away from one.

Where in New York can you find organic coffee for a dollar or to-die-for almond croissants for a dollar fifty? Splurge five dollars, and you had your quick lunch.

I love animals. And while you can always count on spotting a squirrel or a rat in New York, it’s just not the same as London’s 17 free city farms. Whether it’s a llama, a donkey, or a chicken that you prefer, you can come in and play, volunteer, enjoy the garden or a cup of tea, and even host your next party here.

Most of them are easy-to-reach by foot or public transport. In London, you can breathe, literally and metaphorically.

Also in London, you can let your dog be a dog because you don’t need to leash it. Unlike in New York, pups here are allowed to run free and happy in any park. Most of them are exceptionally well-behaved.

As a dog mom of two, I miss being out exploring with my furry friends, without having to look out for a ticket man to show up.

It seems that New York’s answer to the lack of dog freedom is an obscene amount of
pet shops.

Not only is London green but it’s also blue, with its rivers and canals stretching for miles throughout the city. But it’s not water I miss the most, luckily we have plenty of that in New York, but narrow canal boats parked alongside canal and river banks. 10,000 Londoners call these boats home.

Nearly all of them move their boats every two weeks, to avoid having to pay rent. Many hold jobs in London. Others are full-time travelers. These bohemians are some of the most resourceful, life-loving and down-to-earth people I’ve ever met.

It might be a cliché, but I couldn’t get enough of double-decker buses in London. The city is home to one of the largest and most comprehensive bus networks in the world, and it shows. With over 8000 buses and fixed fares of just one pound fifty, I could always rely on the bus to take me places, when not in the rush.

Sure, climbing on to the second floor of a moving vehicle can get tricky, especially after a few pints, but it’s well worth the view.

And boy, do Londoners love their pints. New York, on the other hand, seems to be stuck in the Prohibition Era.

Not only alcohol consumption not allowed outdoors, but should you decide to get drunk in the privacy of your own home, you need to look for a wine shop or a liquor store to buy anything stronger than a Budweiser.

In London, having a pint after work is almost a ritual, and wine and spirits are sold at any grocery store. Quirky fact? London doesn’t do corks. Most of its wine is sold with screw tops. It might not be classy, but it sure is convenient.

Recently, a European friend in New York asked me where she can buy cheap groceries. I laughed, but I could feel her pain. My answer was: nowhere. Food shopping in New York is expensive, and quality grocery stores are scarce. Four dollars for a loaf of fresh bread? Five fifty for a half gallon of organic milk?

In London, I could get those for one and two dollars respectively. And American pigs better be eating rainbows to produce such expensive pork chops. Londoners will simply never know the pleasure of dragging Trader Joe’s bags across town during the rush hour commute.

A combination of Gulf Stream and moderate climate make London a fertile ground for these evergreen beauties. It’s not uncommon to see a palm tree growing in someone’s front yard in London. And every time I spotted one, I felt a little warmer.

Another common sight in the streets of London is vintage cars. While New Yorkers love their cars yellow or big, Londoners prefer the more tasteful variety of old classics. A sucker for all things vintage, I never got tired of spotting them.

A chain of high-end department stores, and a place where you can feel class and comfort at the same time, John Lewis is an upscale version of Marks and Spencer, and a perfect place to window shop or spoil yourself. Not pompous in a 5th Avenue kind of way, it’s cozy, colorful, and full of beautiful designs, big and small. And, most importantly, it’s so essentially British.

No list about London would be complete without mentioning the British sense of humor. Not only it’s on TV, in advertisement and on everyone’s tongue, but it’s in the daily surroundings.

You can find it in the loo (bathroom), at the doctor’s office, or in line at the supermarket. British never take themselves too seriously. And us Americans could use a lesson or two in that.

Shopping for a willy warmer, anyone? 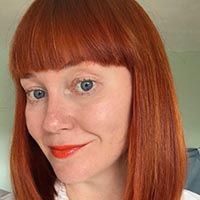