City of the Beast: A Heavy Metal Tour of London

The London home of Iron Maiden and Other Attractions

I’ve come to London on pilgrimage.

As my ancestors walked miles through the desert to reach the holy lands, as my parents followed our family roots through England, Ireland and Yugoslavia, I follow my own gods – Iron Maiden, Black Sabbath, and Judas Priest – to the city of their worship. I journey to London: a holy land of heavy metal.

Upon disembarking the plane the first stop for any weary metal pilgrim is a pub, any pub, because the flight was long, the food was terrible, and it’s been several hours without any alcohol.

No metal tour of London would be complete without a jaunt to the Ruskin Arms. With a capacity of 300 unholy souls and a motorbike crashing over the bar, the Ruskin Arms is also the London home of Iron Maiden.

The band played their first gigs there in 1976 – including their first set with Bruce Dickenson on vocals, back when they called themselves Genghis Khan. Iron Maiden even features the pub on the cover of several albums.

Sadly, the Ruskin Arms is set to be demolished by the end of the year (2008) to make way for a block of attractive London flats. If you can get there before this fateful day, the Ruskin Arms is located on High Street North, Manor Park, London E12, near the East Ham station. Live bands – including an in-house Iron Maiden tribute – play most nights.

For that post-Ruskin pick-me-up, head over to any one of the fantastic goth/metal pubs scattered throughout London. Your first stop should be The Intrepid Fox in Bloomsbury; but you’d better dress in your metal best, otherwise, the bouncers won’t let you in.

If your taste in metal bars ventures more towards the dim-lit cave, Crobar’s not far down the road. Garlic and Shots – home of the best music selection and the most stench-inducing food – provides any weary metal traveler with a cool beer and a platter of garlic-soaked chips. They’ll also play ANY metal CD you bring along.

On Holloway road you’ll find the Old Kings Head and the Devonshire Arms (now the Hobgoblin) – two of the most longstanding rock and metal bars in London. Your final stop for the evening should be Electric Ballroom in Camden, where goth/metal/industrial plays every night.

The Electric Ballroom hosts regular live gigs, and I advice checking their website before you go out in case you come ready for some Slayer and instead find yourself stuck at a New Wave dance party. (Don’t laugh. I’ve heard it happens.)

Once you’ve staggered home (in my case, to a filthy, grime-encrusted apartment on Holloway Road, squeezed between a fish shop and a brothel) and snored away your hangover, it’s time to head to Camden for some Metal Retail Therapy.

If you’re anything like me, you’re a sassy metal lass who finds it impossible to source adequate attire from your hometown in New Zealand.

Camden is an essential visit. With my friend Elizabeth and Joey the hot Irish metaller we met randomly on the tube (‘Nice shirt!’ ‘Thanks. Are you going to Iron Maiden?’ ‘Hell yeah – hey, I’ll show you a place to get wicked cheap t-shirts…’) I trawled the Camden markets, picking up corsets and socks and all manner of zippered, riveted and skull-bedecked treasures.

Any goth-blooded female can’t escape the clutches of Fairy Gothmother, one of the most expensive (‘but totally worth it’, I cried as I handed over my visa card) and infamous of Camden’s lady boutiques. They take orders on their website fairygothmother.co.uk, but there’s just something exciting about trying those exquisite clothes in person.

I also recommend Resurrection Records – they house a nice collection of metal, punk, goth and alternative music and a few t-shirts. The staff here always look after you. They can find anything amongst the haphazard stacks.

Camden markets remains one of the few places left in England where you’re expected to barter. We moved on to some random hole in the wall where I made my first unsuccessful attempt at bartering (‘A tenner!’ screeched the saleswoman. ‘You want that shirt for a tenner! You’re crazy!’). I walked out with a Manowar shirt and 16 quid poorer.

After spending the morning fuelling your consumer beast, you might consume a late lunch and ponder the peculiar heavy metal dress code. Where did the leather and the studs and the straps and the cuffs originate?

And if, like me, you know that heavy metal’s unique dress code actually originated with Rob Halford – the iconic frontman of Judas Priest – who outfitted his entire band from Mr. S, his favorite London gay sex shop. And you might think, ‘I wonder if Mr. S. still exists? Wouldn’t it be neat to visit the very shop where the first heavy metal outfits came from?’

Think again. Seriously. Unless the thought of walking into EVERY sex shop in Soho and trying to explain your mission to the proprietors fills you with joy. If Mr. S still exists in London (I know it’s a famous men’s sex shop in Los Angeles, and please don’t ask me how I know), its so far underground it clearly doesn’t want to be found.

Life and Death Tour
Now you’ve reached the second eve of your London adventure. What should you do? Well, I know what I did. I went to Earl’s Court with three friends to see Iron Maiden on their sold out December 23rd show of the Matter of Life and Death tour.

I’d never seen Iron Maiden before and they did not disappoint. After playing every song on their Matter of Life or Death album and Bruce Dickenson trying to teach the audience the theme song for Sooty and Sweep, they launched into five classics – Fear of the Dark, Aces High, The Trooper, 2 Minutes to Midnight and Run to the Hills. An excellent night out.
One Final Mission

Sunday morning we lazed on the couch and talked about how awesome the show was. Then we decided that before leaving London we had one final mission.

No metal holiday would be complete without a Heavy Metal photo shoot. You know the ones – here I am, dressed in my metal finest, standing on a statue or a cliff or on Rob Halford’s crotch – throwing the goat and looking utterly metal.

We decided Highgate Cemetery – only a short walk from our Holloway Road residence – would be our location.

The Cemetery is open every day of the year, except Christmas and Boxing Day. Admission to the East Cemetery (where Karl Marx, George Eliot and Michael Faraday reside) costs L3.

Entry to the west cemetery (home to the monumental ‘Lebanon Circle’ and ‘Egyptian Avenue’) is only available through guided tours, which leave at 2 pm every weekday and every hour on the weekends. The cost of the tour is ? 5. Visit highgate-cemetery.org for more information.

After a guided tour by a knowledgeable and obliging guide, we were let loose on our own. Ryan, my amateur photographer for the day, traipsed after me while we explored forgotten tombs and threw the goat at unwary spirits.

We visited the grave of Karl Marx and were introduced to a few unknown Victorian personalities – like George Wombwell, the infamous menagerist who made a killing by traveling the whole of England with his carriage of animals – tigers, lions, elephants, zebras, monkeys and even a rhino.

And while few famous metallers reside within Highgate’s iron walls, their ghosts do haunt the London streets. In the city that forged the careers of the greatest metal bands of the 70s and 80s, the metal community still thrives in darkened underground pubs and black-shrouded marketplaces.

We haven’t forgotten our history – we have our photographs and our memories, our new CDs and corsets and obscure band t-shirts. The pilgrimage was complete – we’d found what we came to seek. 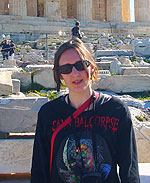 When she’s not lugging her husband’s drumkit from metal bar to metal bar, Stephanie Green writes on travel, alternative weddings, disabilities, and music. Visit her website at steffgreen.com.