Legendary Skiing in the Carpathian Mountains 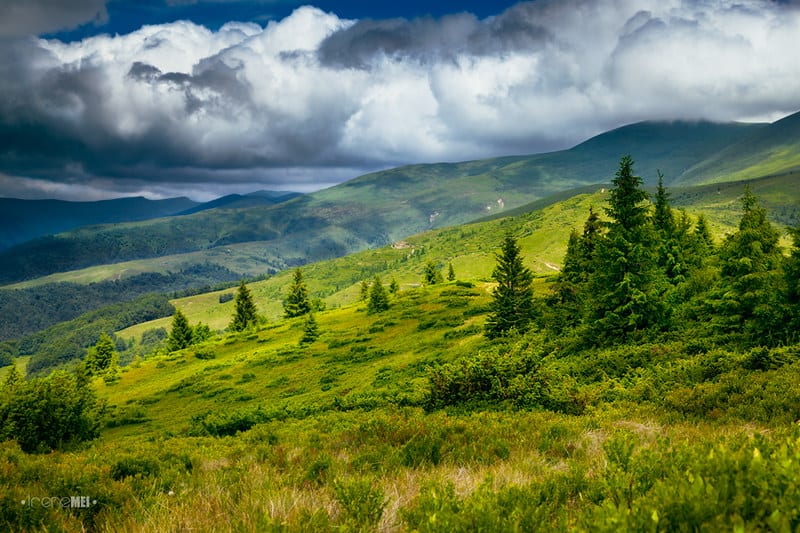 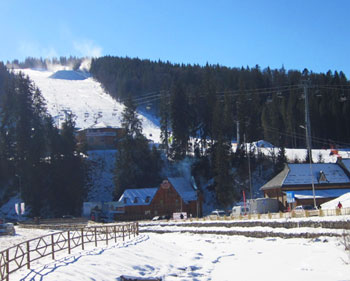 What interested me most about my recent visit to Bukovel, Ukraine’s only major ski resort, was the rapid, uneven development of the resort and the region.

Bukovel is located in the Carpathian Mountains 240 km from L’viv, where I lived during my 2010-2011 Fulbright Scholarship.

Before dawn on Saturday, we went to the statue of [Ukranian scholar and statesman] Mykhailo Hrushevski, where a private bus picked up all the skiers. Many L’viv residents make day trips, leaving at 4 am and returning at 10 in the evening.

At about 8:30, we passed our hotel near Bukovel and asked the bus driver to drop us off. Four and a half hours is a long time to travel 240 km, and a testament to the state of Ukraine’s roads. For much of the trip, the bus weaved from the adjacent shoulder, across the lane of oncoming traffic and into the opposite shoulder to avoid potholes.

The gross corruption and incompetence of the Ukrainian government is universally blamed for the pathetic condition of the roads (among many other things). Ukrainians are all holding their breaths for Euro Cup 2012, some with fear of national humiliation, others with childlike anticipation of calamity.

Bukovel is located in the Carpathian Mountains, home to one of Ukraine’s most distinct subcultures, the Hutsuls. When Christianity penetrated the Carpathians, it blended with local pagan beliefs which were tied to observations of nature. Generally speaking, Hutsul culture is known for woodcraft, folk art, rural life and a close relationship with nature.

Ukraine’s highest peak is 2061-meter Hoverla, in the Carpathian Mountains. Though modest in height, the Carpathians are seeped in history. The Cucuteni-Trypillian culture (5500 BC to 2750 BC) had settlements of up to 15,000 people and rivals Mesopotamia’s claim as the cradle of human civilization.

The ancient mountains stood on either side of the narrow, shoulderless road which led to the resort. Small houses dotted their slopes up to where the forests began. There were no access roads to those houses. I’m fairly certain their residents, like most Ukrainians, do not own cars.

Closer to the road neon signs advertise the newly constructed hotels, ski rental shops and occasional restaurants which have replaced the little houses. Our own hotel, located in the village of Pol’ianyts’a, was still under construction. There were no railings on the stairs, and the carpet appeared in the hallways half-way through our stay.

There was no reception desk or sign, and we wandered around with all our bags until we found the second-floor dining room. A young woman put down her mop, found a ledger, and signed us in. The tea I ordered with breakfast was too fine-grained for the strainer they used, and ended up in my cup. I was not annoyed so much as excited for the new entrepreneurs.

I was a little annoyed the following night at the restaurant of a nearby hotel when thirty minutes passed between their delivery of my potato verenyky, dumplings with sour cream, and my friend’s banosh, a sort of porridge with bacon and cheese.

Ukrainians, with characteristic pessimism, often blame some flaw in their nature for the poor customer service. I think they are mistaken. Free enterprise has only existed outside the black market in Ukraine for twenty years. It takes time for bad managers and entrepreneurs to fail and for assets to pass into the hands of the more competent.

We went to an adjacent hotel instead of searching for a proper restaurant because there are no sidewalks or even a shoulder on the road.

The thriving taxi business mitigates this problem. Pol’ianyts’ a lies within two kilometers of Bukovel, close enough to walk. You can see the slopes from our hotel, but rather than share the narrow road as pedestrians with the endless flow of buses, we called a taxi every morning.

Our taxi driver, Misha, would meet us in the adjacent hotel’s parking lot because apparently the gravel driveway of our hotel was too steep. We slipped through a gap in the fence with our skis and boots every morning.

In America, I’ve grown accustomed to finding a ski resort’s parking lot and working from there, but not so in Ukraine, where, as I mentioned, most people do not own cars.

During the two-kilometer trip to Bukovel, the density of hotels and restaurants increased. Near the mountain, they formed a sort of pedestrian village with bazaars, shops, and an Italian restaurant named Felichita which is well worth the expense.

There’s a skating rink, a small four-wheeler track, slope-side condos and horse-drawn wagons taking skiers back and forth. Misha drove us past several of the ski resort base-areas and dropped us off on the side of the road.

He would pick us up there, too, and once got yelled at by the guard with such intensity, I feared the guard would hit him. Once we departed, Misha said, “I gave the morning guy something [i.e. money] for coffee, but this is some other guard. Him I don’t recognize.”

Among the many things under construction at Bukovel is a several-story high parking garage, though I don’t think a paid parking garage will serve as a drop-off point.

There was a shortage of toilets and excess of ATM machines, which I hear were lacking as early as last year, so I’m hopeful about the toilets.

The Mountain has five or six peaks and sixteen lifts. The lift system is the most modern I’ve ever encountered. Most lifts had conveyor belts at the pick-up point to accommodate snowboarders. They also had an electronic turnstile system that detected the card you bought as a ticket.

Once I realized I didn’t need to remove the card from my pocket to activate the turnstile, I liked the system, though I could have done without the chaotic convergence of skiers leading up to it, especially on Saturday at lift number four.

I was frustrated because I couldn’t stop thinking about how easily I could fix it with several hundred meters of rope and two dozen posts. My friends grew frustrated too because they had to listen to me talk about it too many times.

Most of Bukovel’s peaks had little lodges on them where we’d go to warm up with hot glint wine. In Ukraine, nobody so much as bats an eye when you carry your paper cup of glint wine outside the lodge to enjoy the view of the surrounding peaks of the Carpathian Mountains. We don’t enjoy such reckless privileges back in the land of the free.

I expect that customer service in Bukovel and the surrounding hotels will eventually improve to match the facilities, but for the moment, it is lacking. In one lodge, I watched all three bartenders count money together while the line I had been waiting in degenerated into a restless crowd.

Two other aspects of Bukovel which are sadly characteristic of Ukraine are the sordid biography of its oligarch owner which even includes accusations of involvement in the murder, and the constant property and tax disputes between the resort and the government. Perhaps the latter requires the former.

As we traveled up the mountain on one of their modern chair lifts, I asked a friend of mine, a Ukrainian corporate attorney, about one of Bukovel’s better-known land disputes from a couple years ago. I asked whether the government really approached Bukovel’s owner to change the price of the initial purchase made several years earlier.

“These are their game. I don’t know about them,” he said, waving his hand dismissively. “It’s better not to know,” he added.

There were blue skies, white trails, sunshine and paper cups of glint wine waiting for us in the lodges.

Roman Skaskiw served as an infantry officer with the 82nd Airborne Division in Afghanistan and Iraq. He was recently recalled for another tour in Afghanistan with the Kunar Province Provincial Reconstruction Team.
He is a 2007 graduate of the Iowa Writers’ Workshop. His work has appeared in The Atlantic, the New York Times, Stanford Magazine, Front Porch Journal, In The Fray Magazine, and elsewhere on GoNomad.com. He is shown here climbing Mt. Kilimanjaro.

A Visit to Bodrum, Turkey: Barracudas and Belly Dancers

Visiting Free Ukraine: A Journey Through the Shadows of History

A Brief Tour of the Holy Land