Moab is the Gateway to Arches and Canyonlands National Parks

In a quest to visit America’s flawless open spaces, I set off for Moab to begin a Utah road trip that would allow me to take the plunge into five of the 59 protected expanses operated by the U.S. National Park Service.

I’m a firm believer that watching travel programs can only serve as an appetizer for the real thing.

I’ve been hearing other travelers echo awe-inspiring tales of arches, hoodoos, and unique geologic color palates for the last decade, but what does it all mean if you don’t venture out on your own and see these murals of red rock and sandstone with their far-reaching backdrops?

The southwest Colorado airport of Grand Junction makes it easy to visit Utah’s parks. Just a quick stop by the car rental services is all it takes for the adventure to begin.

Heading west on the I-70, I left like a giddy schoolboy on a first date. Mountains galore peeking out in all directions. I marveled at the signs reminding me, “Welcome to Utah” and later on Utah highway 191, it hit me like a ton of bricks.

Signposts against a backdrop of red rock: “Canyonlands – 34 miles” and “Arches National Park turn right.” Finally, I found what I was waiting for: “Welcome To The City of Moab, Utah.” 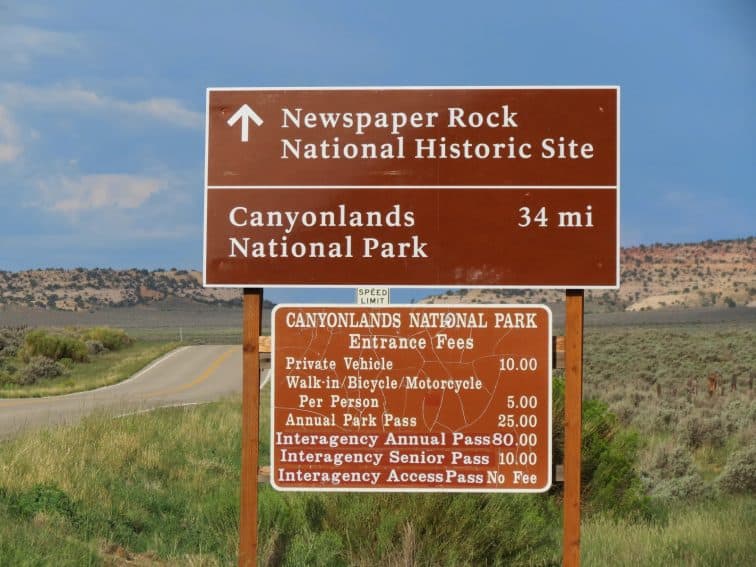 Moab is the classic, modern-day western frontier town, the kind of place that became idolized in long-running television westerns like Bonanza and Gunsmoke.

It’s straight in and out on the I-191, ideally situated to venture out and explore the nearby parks and the Colorado River.

Not only are you entranced by gorgeous red rock landscapes, but you also have the comfort of staying downtown surrounded by restaurants and bars, shops, and galleries.

Moab is the gateway to two of Utah’s most beautiful sculptures in the Canyonlands and Arches National Parks. The classic, western enclave comes complete with welcoming locals, who seem to remain unfazed by the fact that Wanderers go to great lengths, traveling from the ends of the earth just to get a glimpse of their irresistible township in red rock country.

After a night of mingling with the friendly inhabitants, it was finally time to experience my first two encounters with Utah’s fabled parks.

Moab clams to be “Where adventure begins,” and the local operator reminded me of another fitting slogan: “Two National Parks – One Destination.” It’s like an outdoor playground where you can experience mountain biking, skydiving, zip-lining, horseback riding, or let a guide take you on a Slickrock Hummer Safari. 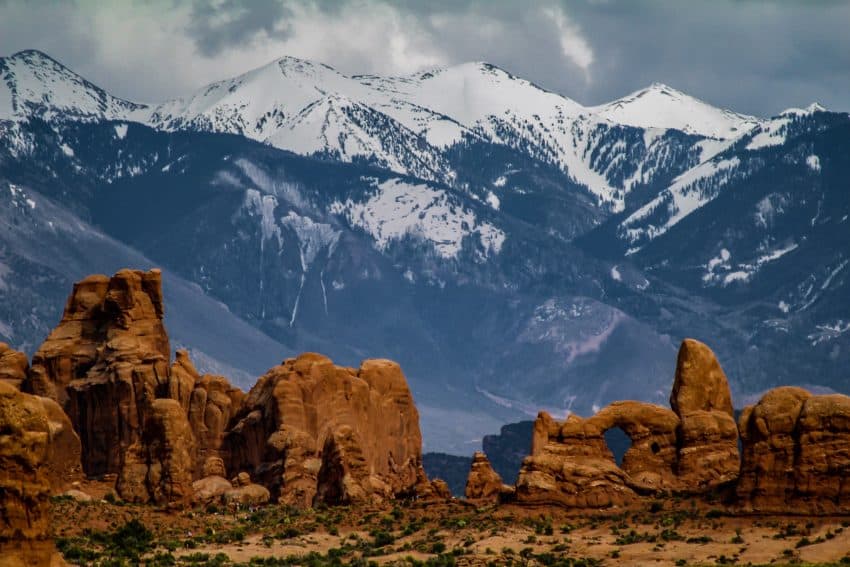 You can river raft or take a jet boat tour down the Colorado River, or even photograph the stunning landscape on a hot air balloon ride. A visit to Moab comes with unique and unforgettable experiences.

Moab is blessed to be surrounded by three scenic byways. Road trippers will witness jaw-dropping cliffs and the backdrops of The Upper Colorado River Scenic Byway. Utah-128 is a spectacular route along the Colorado River gorge. The Dead Horse Mesa Scenic Byway, via Utah-313, takes you through miles of incredible red rock canyon country.

At 6 a.m. I was groggy, still feeling the effects of a local brew called, “Dead Horse Amber Ale,” at the Moab Brewery.

Yes, the only brewery in town, where a hardy local named Bob—I never caught his last name—explained my game plan for someone on a short trip:

“Canyonlands in the early morning for the sunrise, and Arches for sunsets.” Easy enough, I thought. Like headed, I felt like I had run into a dead horse myself.

As giddy modern-day explorers, my wife and I with little clue of what lies ahead, beyond other traveler’s tales and the ubiquitous travel channel, sought out to explore our first national park in Utah, Canyonlands, which is around 30 miles from Moab.

Many times I purposely do not over plan a trip, just for the sake of seeing where I may land or end up. I figured that Utah, not being somewhere utterly unknown like Yemen, I could wing this one with a car and an iPhone. Plus, serendipitous moments have been at the forefront of not only my travel life but also my life in general.

Travel photographers revel in Canyonlands’ low sun angels at sunrise and sunset, which add brilliant colors to the red rock motif. The park is 20 miles of paved road and veering off at any vista provides lofty panoramic views of canyon country.

Having spent half a day at Canyonlands, the easiest way to access the park in a short time frame is to visit the fabled Island in the Sky. The mesa rests on sheer sandstone cliffs almost 1,500 feet above the surrounding terrain.

“On a clear day, you can see over 100 miles in any given direction. The Island in the Sky sits atop of a massive 1500 foot mesa, and is quite literally an island in the sky,” Ranger Rick Sheridan informed me.

I also trekked four hours around the Needles district to see the park from the bottom up, which most visitors miss out on if they are on a quick trip. Grand View Point offers panoramic views of millennia-old canyons.

You can see for miles thinking, “What must the first settlers thought of this precious landscape?” I imagined that early settlers must have avoided this rough terrain.

The park and surrounding areas are difficult to access, allowing for the range to remain as pristine today as it was hundreds of years ago. Bighorn sheep, coyotes, and other native animals roam its 527 square miles.

One of the most striking vistas in the entire national park system is Mesa Arch best photographed at sunrise when colors are most vivid. A view of canyon country like no other can be found here through a rock arch, creating a unique picture frame of massive layers of sedimentary rock. The desert area’s flora includes prickly Pinyon Pine, Agave-like, Narrow Leaf Yucca, and Christmas tree-like Utah Juniper, which all adorn the landscape.

I had seen so many photos of the sandstone phenomenon, Delicate Arch, that I was beginning to wonder if it was something Disney or Six Flags had conjured up. Arches lay claim to fame for having the world’s largest concentration of sandstone arches is quite notable. The labyrinth of lofty arches is out of this world when you see them in person.

Perhaps unlike any time in my life, I really felt like I was visiting another planet. The park lies atop an underground salt bed that is responsible for the arches, towering spires, buttes, mesas, and other encounters with rock stars created through rain, wind, and erosion.

The combination of water, ice, and extreme heat in the summer has sculpted a masterpiece over 100 million years in the making.

The park is perhaps the easiest of the five magnificent crown jewels of the state of Utah to traverse.

Drive in, park your car and hike to view these theatres in stone. The likes of Balanced Rock, The Windows, and Broken Arch are easy to navigate with trails for all skill levels, with mostly short, easily accessible trails under a mile roundtrip.

At the visitors center, I was reminded to visit Landscape Arch, said to be the fifth-longest natural arch in the world, and to Balanced Rock, as both are fragile enough to where they could disappear at any time.

I discovered moderate trails like Park Avenue, where you just drive up to a convenient parking lot and take a leisurely stroll into a broad mixture of sandstone formations, shapes, cliffs, for a sunset hike that will knock your socks off.

For the hardy hiker, treks of three miles or more include Tower Arch, Double O Arch, and the not to be missed, Utah masterpiece, the soaring Delicate Arch. As a friendly German hiker explained to me, the Delicate Arch is statuesque enough to hold a four-story building and is a picture frame to the La Sal Mountains in the forefront.

As summer temperatures can frequently reach 100, it was fortuitous that I paid a visit in May.

In the end, I would visit all five of Utah’s treasured National Parks, but any trip to Utah should start in Moab, “Where adventure begins.” 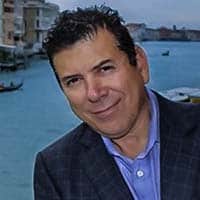 Nicholas Kontis is a travel writer based in San Francisco and Mexico whose books include Going Local: Experiences and Encounters on the Road. Visit his website