A Tale of Two Cities’ Mosques: Dubai and Abu Dhabi

When you’re in Dubai or Abu Dhabi, United Arab Emirates, there’s no mistaking that you’re in the Middle East.

For one thing, you can actually look directly at the sun and it doesn’t hurt your eyes, as you can oftentimes during a stateside sunset or sunrise. In the United Arab Emirates, it’s as though the sunrise lasts nearly half the day, and the sunset nearly the other half.

Not the Artist’s Vision

It wasn’t until a few days in UAE that I realized something: all of those scenes I’ve seen before in movies, on television, in photographs depicting the middle-eastern sun beneath a haze, glowing orange, was not simply the vision of the artist. This is really what the sun looks like in this part of the world. And it’s beautiful.

Another reason there’s no mistaking where you are: the heat. Even in early April, we were waking up to 99-degree mornings and topped out around 114.

However, other than times when we were walking outside for half an hour or more, we didn’t feel uncomfortable or sweaty the way you might in 90-degree heat in the United States.

Humidity was low. The heat enveloped you, but it didn’t stick to you. Perhaps that was due in part to the presence of sand. It didn’t feel sandy, you didn’t breathe it in or feel it on you.

But a look at the hazy horizon told you that it was there. Despite the modern marvels of architecture and the green parks and flower gardens, the hazy horizon and orange sun and hot weather reminded you that you were in the desert.

Finally, you know you’re in the middle east when mosques dot the street corners as Starbucks do in America.

As we drove or took the metro from one place to another within the cities and suburbs of Dubai and Abu Dhabi, not more than a few minutes passed along the road without passing another uniform mosque, adobe sand-plaster in style, one or two minarets piercing the horizon, a dome topped with either a crescent or full moon, most of them positioned at a slant in relation to the road.

“I wonder why they’re slanted,” I asked.

“Maybe it’s an artistic choice,” Nataliya suggested—being an artist and designer herself.

The religious necessity turned out to be a good stylistic choice. While it appeared that every neighborhood and every other street corner featured a mosque—allowing the devout to heed the call to prayer heard throughout the day.

Although any mosque will do, just as any Christian church can be a suitable place for a Christian to pray, all mosques are not created equal.

In a sea populated with mosques, Jumeirah Mosque is the prized pearl of Dubai’s collection. Between the modern architecture of state-of-the-art style and the old sandy fort and wind towers of the area around Dubai Creek, Jumeirah Mosque has a foot (or minaret) in each era.

To look at it, you’d imagine it to be an old mosque, like the ancient cathedrals of Europe—constructed of smooth, white stone, geometric designs carved into the stone’s surface, twin minarets towering above, and a massive dome surrounded by smaller, but no less impressive, ones. So it was a surprise to learn that the mosque was built in 1998—quite recently.

The most impressive aspect of Jumeirah Mosque is its “Open Doors, Open Minds” tour. One of several worthwhile cultural experiences offered by the Sheikh Mohammed Center for Cultural Understanding, the interactive tour seeks to teach non-Muslims about Islam and Emirate culture. Find out more at this website.

The tour started in the mosque’s satellite house, just across from the mosque. There, in a room of Persian rugs and matching red pillow chairs and sofas, we enjoyed a welcome reception with Arabic coffee and tea, fried bread with fig sauce, dates, and other local treats.

Men and women who were not appropriately dressed were given the opportunity to borrow traditional clothing to cover their arms, legs, and heads.

We then proceeded to the courtyard, where we could sit by the fountain to wash our feet, hands, and faces before entering the mosque.

No Shoes, and Cover-Up

Of course, you can’t wear shoes inside the mosque, and men and women must cover arms and legs. Women must also wear a headscarf. Our guide, a woman in a traditional abaya, escorted us to the main door of the mosque.

Those lines are important because they indicate where to line up for prayer. The walls and trim were light yellows and pastel blue with a muted salmon pink.

Arabic calligraphy and etched designs decorated the walls, trimmed the frames, and filled out the inside of the dome.

The windows were bejeweled with stones, much like jewels on a stained glass lamp, only lighter, allowing the sunlight to penetrate.

Our guide and her assistant instructed us to line up along a seam in the run, so we all sat in well-organized rows, one behind the other. They proceeded to talk about Islam, describing its true nature as a religion of peace and inclusion and lamented the terrible impressions perpetuated by terrorist acts in the name of Islam, which do not represent the religion.

The Call to Prayer

Our guides demonstrated the call to prayer, and the prayer itself, and answered questions about the mosque as well as the Muslim religion.

The call to prayer was something we’d become familiar with since arriving in the United Arab Emirates.

Wherever you are—whether along the old, dusty buildings along Dubai Creek or in an air-conditioned mall surrounded by skyscrapers—we heard the call to prayer ring out six times a day.

Yes, six. Devout Muslims are supposed to pray, facing Mecca, five times per day. However, there are six calls—one before sunrise and one after sunset—to ensure a follower can pray five times whether an early riser or a night owl.

The “Open Doors, Open Minds” experience was intended to enlighten us, and as we ended the tour with more Arabic tea in the reception area, we certainly felt we had learned something—and in a beautiful setting.

Sheikh Zayed Knows How to Put the “Grand” in “Grand Mosque”

With our Islamic education planted at Jumeirah Mosque, we were ready for the majesty of Sheikh Zayed Grand Mosque.

As we approached Abu Dhabi from Dubai, the gleaming white palace of a Mosque was an amazing sight. The closer we got to it, the more impressive the massive mosque appeared.

Sheikh Zayed bin Sultan Al Nahyan, the founder and first president of UAE, commissioned the mosque. He’s also buried here. Sheikh Zayed envisioned not only the grandest mosque in his nation, but one that would unite people, culture, and art. The mosque appears to be from an ancient age, but in actuality, it’s new. Construction began in 1996, and it was completed, in 1997.

Materials used in building the mosque come from around the world. Marble, gold, semi-precious stones, crystals, and ceramics are everywhere, inside and out.

After basking in the glow of the marble-white exterior, it was time to go inside.

“You cannot go together,” a guard waned us.

“Why not,” Nataliya asked.

The guard pointed. “Men, this line. Women, that line.”

Sure enough, there were separate entrances, each complete with its own metal detectors and x-ray scanners.

We made it through security and met on the inner grounds, where the inner-ground exterior was even more beautiful.

Inside the mosque’s courtyard, but still, not in the main mosque, we marveled at the enormous inner courtyard area decorated with floral inlaid stone designs.

We walked along the outdoor hallway, a reflecting pool beside us, admiring the countless columns with inlaid stone floral and vine designs, and gilded palm tree tops. In this area, we removed our shoes and placed them on numbered shelves, then proceeded toward the grand entrance.

The entryway dazzled us with inlaid stone, etched walls, and an impressive chandelier. But beyond that, the main prayer room amazed. Above us, dangling from the enormous dome, sparkled a colorful crystal and gem chandelier. This, the largest of seven chandeliers in the mosque, is the second-largest chandelier known to exist anywhere in the world.

Imported from Germany, it and its six smaller siblings feature millions of Swarovski crystals.

Ninety-nine names of Allah decorate one wall with calligraphy. Ninety-six columns inside the main prayer hall are decorated with marble and inlaid mother of pearl.

At the base of some of these columns, between the sets, are backlit floral patterns on the floor. The same floral designs light up the wall in orange, yellow, blue, and white.

Filling out the floor is the world’s largest Persian Rug. The beautiful green, red, and gold rug was designed and handmade in Iran. It took more than 1,000 carpet knotters to complete the 35-ton carpet, which stretches more than 60,000 square feet.

It was shipped in one piece but had to be cut in order to fit into the mosque, then stitched back together—conveniently providing the marking for worshipers to line up for prayer. As many as 40,000 worshippers can fit inside at one time. Fortunately, or us, it wasn’t very crowded during our visit.

The call to prayer, beautiful Arabic singing, added to the serene mood of the exquisite house of worship.

Back in Dubai, near our hotel, we continued to hear the call to prayer six times a day as we did every day of our trip. Often, the air would carry the first call to us as we lay in bed, half-awake, serving as a local alarm clock.

Walking the streets of Dubai and Abu Dhabi, strolling in malls, crossing Dubai Creek in an Abra (water taxi), dining in cafes and restaurants, enjoying views from observation decks—wherever we were and whatever we were doing, the call to prayer was a part of this place as sure as sand and sun and mosques.

After visiting Jumeirah and Sheikh Zayed Mosques, however, we had a different feeling when we heard the call. The visuals in front of us, of men and women leaving their shoes outside modest, neighborhood mosques, mall worship rooms, or on the street, praying toward Mecca—that still remained.

But now, we also had a deeper understanding from one tour—and an image of how majestic a mosque can be from the other. Each of the two mosque visits in the world’s two richest cities offered a unique experience and left a lasting impression.

If you have concerns about traveling in this part of the world, keep in mind that this is probably the safest, most westernized, and most modern city in the Middle East. Have no reservations—other that hotel and restaurant and tours—in deciding to visit the United Arab Emirates.

Finally, remember to respect the local people and religion by wearing appropriate clothing (covering your arms and legs) and refraining from displays of public affection—save that for the air-conditioned hotel. 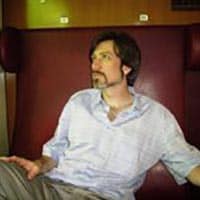 Eric D. Goodman enjoys traveling as much as he loves writing. His fiction and travel stories have been published in many periodicals, including Go Nomad, The Washington Post, The Baltimore Review, The Pedestal Magazine,  and others.  Visit his website at www.EricDGoodman.com