Last week I hiked the Aonach Eagach Ridge in Scotland with my best friend and his father-in-law.

If the purpose of the trip was to turn my legs into trembling stalks of jello, then it succeeded within an hour of our leaving the car. And it kept succeeding until we reached the end of the ridge.

Neither my friend nor his in-law – a wiry, former British special forces gent in his mid-60s – had prepared me for the Aonach Eagach. In fact, they had told me almost nothing about the walk.

“Shouldn’t be too bad,” my friend had said insouciantly. Then he’d handed me a review of the hike. Atop the page was a picture of a smiling man sporting a pair of cool sunglasses.

The author, it seemed, wasn’t impressed with the difficulty of the ridge, and the best indication of the danger to come was a passing reference to “excellent scrambling.”

Excellent, I would soon learn, is a relative term.

But the Aonach Eagach didn’t start with excellent scrambling. The start of the walk – a 3000-foot climb to the summit of Meal Dearg – was pleasantly invigorating.

The sun was shining and I was feeling my oats. My hiking companions, on the other hand, seemed winded. This pleased me more than it should have.

As we neared the summit of Dearg – one of Scotland’s famous “Munros” – a fog settled on the mountain that restricted visibility to about one hundred feet. From the peak, I couldn’t see the ridge that would imperil my life for the next three hours. We snapped a few misty photos and moved on.

Before I continue, I should probably describe my climbing experience. I don’t have any. There, that was easy. Back to the story.

I was still leading the group when we hit the first technical bit – an exposed scramble zigging and zagging down a slippery cliff. And by exposed I mean exposed. If I slipped, I realized, it would mean a fatal tumble down the side of the ridge.

Given this unhappy fact, a few steps were all it took to activate the fear center in my brain. Don’t do this, it was saying.

But I did do it. When I reached relative safety, however, I noticed my legs were useless lumps of quivering flesh.

“Nice lead…I think that’s the only tricky part,” my friend assured me. I believed him.

As it turned out, my credulity was extremely short-lived. Within two minutes, another difficult scramble materialized. Somehow my legs regained their function. Then another scramble. Somehow I found hand and footholds as I spidered down the slickness. Then another. My friend kept assuring me, with less and less confidence, that each scramble was “the last tricky bit”.

He stopped doing that after number four or five.

About an hour into the traverse, we came upon a seemingly impassable boulder blocking the route. Not to be deterred, my friend found another way. It wasn’t, however, an easier way. It was a proper climb, not a scramble, down a sheer grassy face on the south side of the ridge.

It offered only a few slippery stones as holds. My friend began to climb down it.

“Doesn’t look good man,” I warned, leaning over the precipice. It didn’t look good at all. I had, in fact, never been so worried about anyone in my life. Nevertheless, he continued his shaky descent.

“If you have any doubts, better to turn back,” advised his in-law. To hear the concern in this Stoic’s voice was almost as frightening as the sight of my dangling friend. This time my friend listened. With great care, he slowly scaled his way back to safety.

Silently we pressed on, our special forces guide shepherding us back to the original route. Now I had only one goal: don’t die.

It was now two hours into the ordeal and the murk had mostly cleared. At the end of the ridge, maybe half a kilometer away, I could see a reasonable, human-style, path spiraling upwards to the summit of Sgorr nam Fiannaidh, the last peak before the final descent.

There were only a few more scrambles to survive. This time, they actually were the last tricky bits.

But the ridge had saved the worst for last. It was a shinny up a narrow fissure, the left side of which lay exposed to a staggering drop. Our special forces guide went first. And made it look easy. Now it was my turn.

I got about halfway up the cleft and froze. I couldn’t find my next hold. Then my body, I noticed with some horror, began to lilt to the left. It was an uncontrollable lean. I felt my grip slipping.

“Oh Jesus, oh no,” I rasped. My panic was making things worse.

“It’s okay… you got this,” came the voice of my friend from below. He was scared. I was scared. The fear was paralyzing.

But it wasn’t the last thing I ever felt. I don’t know how, but somehow I found my strength and pulled myself up and out of the rift. It was over. The ridge was over, and my gelatin body would find its way up and down the final Munro.

When I reached the bottom, I looked up at the ridge – a barbed black dragon sleeping in a cloud of smoke. As I absorbed this ghostly image, a thought crossed my mind: 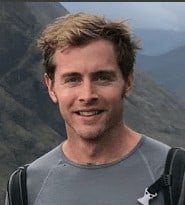 Brian Stanton is a freelancer, hiker, and ancestral health buff living outside of Philadelphia. He writes on meditation and nutrition at Primalsapien.com.