When I first saw a picture of Prashar Lake I just knew I had to visit the place. And what a trip it has been! Prashar Lake is situated at the height of 2730 meters (nearly 9000 feet) in the state of Himachal Pradesh in India. The lake and the temple on it are devoted to the sage by the same name. However, for us the attraction was nature.

Since we do not drive ourselves in the hills, the most logical thing to do was to take a bus to the town of Mandi (on the way to the popular but crowded hill station Manali) and stay there for the day. ISBT (Inter-state Bus Terminus) Kashmiri Gate, New Delhi is where we usually take a bus. The government run buses are available from inside the terminus.

One should ignore the touts who try to tell that there is some problem with the particular route you want to take and theirs’ is the only bus available.

Being summer and Indian school holidays, we could not find a seat on a Manali bus and we had to go to Chandigrah first and from there take a bus to Mandi. We started from ISBT at 10:15 p.m. and we reached Mandi at around 11:00 the next morning.

Mandi is a small town where we checked into a random hotel (called Standard Hotel). It was somewhat clean and cost us Rupees 300 (nearly 7.5 dollars) per day.

After a meal at a better-looking hotel called Mayfair, we caught up on Avomine (anti-nausea medicine for our motion sickness) induced sleep.

In the evening we took a walk to the Tarna Temple (also called Syamakall Temple). Mandi is a small and somewhat crowded town but the beauty of such places is that if you walk for a few kilometres the place becomes tranquil and the walks green and a pleasure.We also checked out later the bus timings for Bagi (ask for ‘Bagi near Prashar Lake’ as there is another similar sounding place called Baggi in opposite direction) and the first bus would leave at 6:00 a.m. We intended to take that bus and then trek the rest of way to the forest department guesthouse at Prashar Lake.

We tried booking the forest department guesthouse at the lake from New Delhi itself by calling the office in Mandi (91-1905-235360, the number is listed on HP tourism website).

The first time Sesha called he was told that it is not a problem as the guesthouse is almost always empty. When we called closer to our visit, they said the rooms are there but as the district forest officer (DFO) is on leave, nothing can be booked without his permission. This caused us mild panic attacks as there is no other place to stay, but they suggested a way out.

They gave us the mobile number of the DFO and said we could request him to grant us the permission. We did the needful and finally the Mandi office told us that the reservation is done or so we thought.

Mandi to Prashar via Bagi

So, the next day, we took our seats by the window at the 6:00 a.m. bus that goes via Bagi. The bus started at 6:30 and deposited us at Bagi by 8:30 in the morning. There is a Dhaba (road side food joint) where we ate bun-omelette for breakfast with tea. Right in front of it was a board pointing to the trek route to the Prashar Lake.

The trek route and the jeep route are different and the young lad running the Dhaba told us he could reach the lake in one and a half hours. I told him (in Hindi) I would never be that quick and he replied, “Yeah you might take five hours”. Five hours didn’t sound too bad to me. 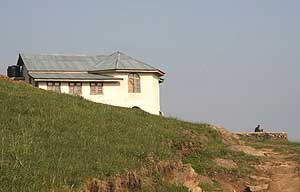 So, off we went after the breakfast on the trek route. We crossed a tiny stream and then the path started moving uphill. For the next 20 minutes it went gradually uphill and then for the next four hours it went steeply uphill.

The way is marked with arrows but at many points there are possibilities of taking the wrong way. We kept asking the people we met (one person every 45 minutes or so) if we were on the right track. Anyway, there is an easier way to guess the correct route, when in doubt, pick up the one that offers the steepest climb!

Thus trudging for the next four hours we could finally see a structure that looked like a guesthouse. A few people nearby confirmed our opinion.

I was so tired by now that Sesha offered multiple times to carry my small bag in addition to his but I refused telling him that for this short distance I do not want to be reminded for a lifetime that he carried my bag! I managed to reach the guesthouse in one piece though very tired. 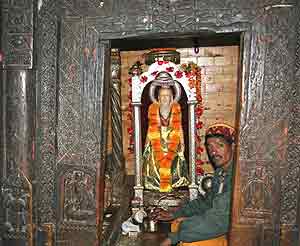 We not only gained 1980 meters (6496 ft.) in a day but also must have gained a substantial portion of it by walking! No wonder I felt so tired.

But We Booked the Guesthouse!

When we finally landed at the forest department guesthouse we had to wait for the person in-charge. We told him we had booked a room and he flatly refused it saying he had no information about it.

I was feeling so tried, cold and hungry that for a moment I did not know what to say. Then I simply sat down on the porch and told him that he had to give us a room. We had come walking from Bagi and there is no way we are going anywhere! Then he asked if we need two rooms or one? Now I was getting some clue. 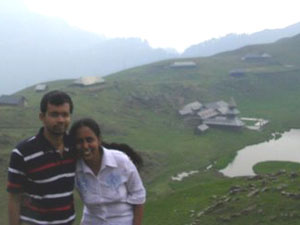 Mridula and Sesha: They are married.

Part of his problem was that I do not ‘look’ married according to the Hindu tradition.

We simply insisted that he had to give us a room and he should call up his Mandi office or the DFO’s cell phone to confirm our reservation. He did try calling some number on my cell (it worked there in middle of nowhere and there was no other phone) but could not get through.

He finally relented and gave us a room. By the next day he was convinced that we are married (have been for past seven years).

He said to me, “But why don’t you use any make-up? How can anyone make out that you are married?”

Well, I sidestepped the whole conversation and I don’t blame him. What is normal (trousers and a shirt with no make-up) in Delhi can seem very suspicious in a remote Himachal Pradesh town.

The guesthouse looks quite good in the picture and I must say the rooms (including the bathroom) are huge and largely clean. But we did not have a light in our room; only the bathroom light worked. And it took me one day (finally when the caretaker was convinced that we are married and ‘respectable’) to tell this to him. 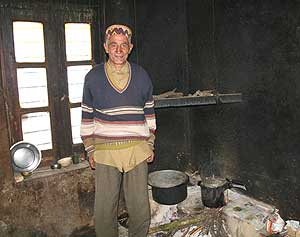 The chef in his kitchen

The food was cooked on wood. And the gentleman who cooked the food would either make Curry (Dal) and rice or Chapatti and vegetables and we were OK with it, after all, it is not easy to cook on wood.

On the day we arrived we ate at the canteen by the lake. It was Sunday and there was a small crowd of people from nearby places and we were the only people staying at the guesthouse.

The lake is a kilometre and a half (1 mile) from the guesthouse and it was only after food that we were able to admire it properly. Both of us felt happy with our choice of destination, but we were just too tried to do much that day.

The next day I woke up early and went to the lake. Come Monday and the place was almost empty apart from the priest, canteen people and one family from a nearby village. The family asked me to take a few photographs of them and I became their unofficial photographer for the next 45 minutes!

After the photo session, for an hour or so I had the lake almost to myself and I clicked its photographs to my heart’s content. One can walk around the inner circle of the lake but as it is of religious significance, one has to take off the shoes. Outside the fence one can walk with the shoes on. 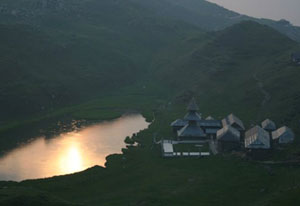 The lake at sunset

Later, Sesha and I both came to the lake and enjoyed the peace and the vast open spaces around the lake. Later in the evening we climbed higher and caught the sun setting in the lake. The next day, we were turning back and we decided to hire a jeep rather than take that steep climb downwards.

On our way back we booked seats in a private Volvo bus from Mandi to Delhi and mid-way the AC broke down. The weather was quite pleasant early in the morning but the driver wanted to get the AC repaired and in the process we had reached nowhere by the time we should have been in Delhi.

By 7:30 a.m. we ditched the Volvo and took an ordinary government bus. Both of us had to miss office that day as we reached home by 12:00 noon, in sweltering heat. Still, taking a break to a tranquil place like Prashar Lake does wonders for my mood.