Ubud: Ceremonies 210 days a year, and then some

It wasn’t Elizabeth Gilbert who put Ubud, Bali on the map.

Decades before the Eat, Pray, Love lady came to town, celebrity travel to exotic places was a thing. When Charlie Chaplin arrived in the 1930s he was so charmed by the beauty of the Balinese people that he

made a short film. Eighty years later the magic of YouTube allows us to see his Ubud , but has that Ubud vanished?

Certainly on the surface all might seem to be gone, with buildings encroaching rice fields and traffic clogging roads. But every day there is rich evidence of the great strength of Bali — her culture — and nowhere more than in Ubud, where colorful and spectacular traditions carry on as if tourism never happened.

A dot in the Indonesian nation-archipelago of around 17,000 islands, Bali is a Hindu enclave in a predominantly Muslim country. For more than a millennium Ubud had been the religious heart of this island, practicing its undiluted religion. Offerings to the gods are made every day without fail.

A more major ceremony of some kind will probably be happening somewhere in the cluster of villages that loosely make up Bali’s hilltop town. A visit to the tourist office will point you in the right direction.

Although some ceremonies are public and involve colorful street processions, many are held inside temples. And there are a great many temples. Visitors are welcome as long as they are respectfully dressed.

Etiquette requires the minimum attire of sarong and sash for any temple or sacred space. It’s better still to have shoulders covered and to be aware that menstruating women or anybody with an open wound should not enter.

If attending a family ceremony as a guest it’s polite, and will be really appreciated, to go full ‘adat’.

Every street has a few outlets selling traditional clothing; and supermarket clothing sections also have plenty of inexpensive choice. Balinese people are delighted to help visitors dress – they value the respect that the effort shows.

What ceremonies, and when?

If there is a more complex calendar anywhere, it’s difficult to imagine. A Balinese year is 210 days, and within that year are concurrent weeks of 3, 5 or 7 days. Every day seems special. Ceremonies for metal objects, for plants, for puppets, for Saraswati, goddess of learning are just a few.

In the family a new baby is welcomed with several special events; a young adult needs a tooth filing occasion. Temples have birthdays, but more of that later.

Major ceremonies occur every 210 days but others only when the holy men decree the auspicious time. With one exception: Balinese New Year, Nyepi.

Nyepi is the only (fairly) predictable ceremonial time. A lunar festivity, it is still a moveable feast, but will always occur each year in late March, or early April. On Nyepi eve, the streets heave with young people finding every reason to make a noise. Drums, gongs, home-made bamboo rockets (yes!) have replaced the traditional spoons and pans. Hospitals do well on Nyepi eve.

The deafening volume is to frighten off any evil spirits that may be lurking. To help them on their way huge effigies, ogoh-ogoh, are paraded. Weeks have been spent in the villages constructing these monsters. Ubud ogoh-ogoh are regarded as the ugliest of all, not just in the main area but surrounding villages too. This hilarious, noisy communal time precedes a truly unique 24 hours.

At 6am everything stops. Everything. No planes fly in, no people or traffic are on the road (except village enforcers and emergency vehicles), no music in the house, no electricity consumed, nothing. The day of silence will last until the following morning.

This silence is profound. Even the dogs seem to respect it.   If clear, the night sky is astonishing. Hotels offer minimum service to guests. For Balinese the day is one of prayer and reflection. For others a time to stop, pause, read, be.

At 5.59 the next morning it’s back to noisy normal as the first motorbikes of the day rev up. One story behind this special day tells that the bad spirits might return after being chased off the night before.

They’ll head back to the island, look around and tell themselves that it’s so quiet and boring that they won’t bother to return. Whatever the story, the planet could well emulate this day of low consumption.

Weeks before Galungan, sometimes referred to as the ‘Balinese Christmas’, a common sight will be motorbikes carrying very long, curved bamboo poles. The most important time of the year is drawing close: the ten-day festival when the ancestors descend from the sacred mountain, Gunung Agung , and return home to their families.

To welcome them, these poles will have been beautifully decorated and erected outside every building on the island. Called penjors, they have become a symbol of Bali. As the holiday occurs every 210 days, they can be seen twice in some Western calendar years.

Offices, shops and even restaurants can be shut for the duration as people need to return to their villages for the feasting and prayers. Some businesses cater for tourists by employing staff from other islands to minimize disruption.

Ten days later, Kuningan marks the return of the ancestors. Until next time. Young boys will parade the streets with musical instruments carrying a miniature barong, a lion-like protector. For a small donation the boys will play and dance and generally be adorable. Next Galungan, the next generation of boys will perform and so tradition is preserved.

A young boy walks home from school, hearing music in his head as his hands move along an imaginary gamelan , the distinctive percussion of ceremony.

Toddlers dressed in ‘adat’ emulate the dancers and musicians in the temple.

In the art school, children as young as seven are producing works any adult would be proud of. They have been painting and drawing all their lives.

Balinese culture is very much alive, and will continue through the children, and their children, despite the pressures of tourism and a new consumer economy.

It’s common for a Balinese wedding to go on for two or three days. It’s more common than not for the bride to be pregnant as a guarantee of children. And if the couple belong to different castes (Hindu, remember) a mock kidnapping and elopement keeps everybody happy.

The parents can’t argue and the young couple can then have a ‘proper’ ceremony like their friends.

Rituals symbolizing fertility begin early in the morning at the groom’s family compound. The main business will occur once the priests have arrived. Busy men, they arrive when they arrive, so patience is a quickly learned virtue. The woman will be leaving her family to become part of the husband’s, maybe in the same street, maybe in another village far away.

Here she will need to find her place in a compound of 30 people or more. Not easy. Before the wedding day the banjar, a village sub-group,   pitches in: food is the men’s job, offerings and decorating the women’s. Communal life is strong. Every large event is the same and everybody understands that the support of the banjar. Funerals especially.

The Balinese do death well. Cremations are spectacular, whether Royal, small or huge affairs where 100 or more people are sent off together. Balinese people must be cremated after death. Before this can happen, they must have undergone a tooth filing ceremony (Balinese smiles are legendary).

If there is enough money in the family, tooth filing can mark a rite of passage into adulthood. But for very poor people all these religious obligations are expensive. That’s why mass ceremonies – tooth filings and cremations –   held approximately every five years in a village, lower the costs for everybody. Cheaper by the 100. At cremation time,   bodies are exhumed   and accorded the same respect as if newly deceased.

With so many members in the royal household, a royal cremation is not a rare occurrence but status decrees just how elaborate the event becomes. The secret lies in the tower. The higher, the more important. The highest is nine levels for a king, and downward from there. But even a minor royal will be accorded a show.

Preparations begin outside the palace weeks before. The two bamboo litters that will carry the tower and the bull will be tied together. Hundreds of fit young men will carry them. A staircase to heaven, or at least the top of the tower, will be constructed so that the body can be transferred when the time comes.

At the cremation ground the late royal will be moved to the bull and everything that has been so meticulously built will burn to the ground. After the ashes have been collected, another procession will take them to water to be scattered. This can be the ocean, but for the royal family the confluence of two rivers near Pura Gunung Lebah temple at the Campuhan Bridge is the most sacred place in town. The river will take their remains to the sea.

August is the month for mass cremations. Although they occur every three to five years in a particular village depending on need, there could be one happening somewhere every year. The preparations start much earlier because of the scale, requiring as many bulls or other mythical figures as there are bodies. With hundreds of family members participating and a gigantic fire at the end to attend a mass cremation makes for a remarkable experience.

People have birthdays (two if you’re Balinese – a 210-day one and a Western one). So do temples. The Odalan ceremonies mark the temple’s anniversary, with singing, much dancing and prayers. Beautifully costumed pre-teens mark their debut into temple life with carefully rehearsed dances. Like any pre-teen giggling and whispering precede the show.

Today’s ceremonies will be unchanged from those that Charlie Chaplin saw 80 years ago. There is no question that they will be observed way past our time. The chances of any visitor to Ubud happening upon one of these spectacles is extremely high, so pack that sarong and sash and join in. 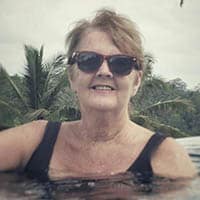 An Australian reader, writer, and photographer, Judi Jagger lives in Ubud, Bali where she immerses herself in the cultural life of her village