I awoke early on a warm January morning. The sun rose, coloring the sky with washes of pinks and oranges.

The streets were deserted apart from a few intrepid travelers who were heading towards the Franz Joseph glacier store. It was from here that our adventure began. Backpackers gathered eagerly, waiting for an experience of a lifetime. Kits were handed out, tried on, adjusted and packed up, along with personal belongings.

Jackets, boots, crampons, all carrying the Franz Josef logo, were passed around with excitement and apprehension. On the advice of a guide, I reluctantly donned my shorts, worrying slightly about frostbite.Apparently, jeans can easily become waterlogged and stick to your legs, making you more likely to freeze.

Franz Joseph is a picturesque little township on the west coast of New Zealand’s south island. Backpackers flock there to experience a day of hiking on the glacier. Snow melt runs off the glacier, creating a cloudy blue river, which trundles past the town.

The glacier, named after Franz Joseph I emperor of Austria in 1865 is 12km long. It is located in the Westland Tai Poutini National Park amid lush temperate rainforest.

We all boarded the red glacier guide bus, which took the winding roads to the beginning of the trek. Excitement ran through the group as we were given an initial briefing by Iain who would be our guide for the day.

We tramped through the lush New Zealand rainforest. Palm trees and ferns overhung the muddy track. Native birds such as fantails and robins flitted along beside us, singing their happy songs. Somewhere in the distance, a babbling stream could be heard. On emerging from the forest we crossed the shingled wasteland to the foot of the glacier.

The stones appeared to be speckled with gold dust which glittered as the sun’s rays caught them.Water ran off the glacier in cascades and flowed to the main river, churning up silt as it went. The mass of ice towered above us, shimmering blue in the morning sunlight. Small groups of hikers traversed the ice, like ants in the distance.

Don’t Climb without a Guide

The group gathered at a sign which warned people not to climb on the ice without a guide. A single red rope barred our entry, horror stories about individuals who had ignored the warnings circulated. People took photos. We waited for further instructions, staring up at the glacier in awe.

After being split into smaller groups we crossed the threshold and tramped onto the glacier, a mixture of grit and ice crunched beneath our boots. We trundled on, pausing to catch our breath as the slope got steeper and steeper. Iain advised us to put on our crampons. Knots were tied and retied; tight enough to hold without cutting off the circulation. Then apprehensively we stamped our feet, testing each step, checking that our boots gripped the ice.

For the rest of the day, we explored tunnels, crevasses and ice caves. The glacial landscape changes almost daily with the glacier’s unusually fast flow. There was a huge gap in the ice; where the glacier had cracked and shifted slightly, making a crevice for us to explore. Inside the ice was dense; the giant blue sides loomed above us, creating a shadowy pocket.

The air was freezing, our breath turned to mist and the blueness of the ice was reflected in our faces. We all piled into the small space, squeezed around corners and climbed over chunks of broken ice. I was wearing a rucksack on my back; the red glacier guides bum bag on my front, contained my lunch. We had come to the narrowest part of the tunnel. My cargo doubled my size, making me momentarily stuck between the icy walls.
“Come on, you can get through there……. you’re as skinny as!” Iain shouted, using the New Zealand slang. 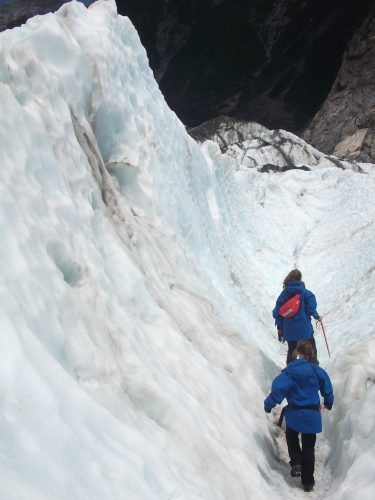 I edged my way further into the tunnel. Then breathed in and slowly, inch by inch, squeezed myself through the narrow gap. My rucksack scrapped against the wall, my bum bag was flattened against my stomach.

At lunch time I found that my banana was squashed all over my camera. As we traversed the ice, Iain told us a Maori legend about the glacier. “The Maori name for the glacier is Ka Roimata o Hinehukatere” he said, enthusiastically waving his arms in the air.

“It means the tears of Hinehukatere. Hinehukatere was a local girl who loved to climb in the mountains. One day she persuaded her lover Wawe to climb with her. However, Wawe wasn’t a very experienced climber.”

He paused for effect.

“Wawe happily accompanied her, until an avalanche dramatically swept him from the peaks to his death! Hinehukatere was so broken hearted that she sat on the mountain top and cried for days. Her tears flowed down the mountain side and froze to form the glacier.”

Iain swung his pick ax, in an arc above his head and expertly cut steps into the ice. Having ascended the icy steps, we had to shuffle down a wall of ice. By taking tiny baby steps and hanging onto the knotted rope which dangled from the ice face, I was able to make it to the bottom in one piece.We were then faced with another challenge- an ice tunnel. It was just over a meter long but was barely wide enough to lie down in.

A rope was passed through the tunnel, and one at a time we inched our bodies into the dark hole below.I clutched the rope, regretting wearing fingerless mittens; the ends of my fingers had started to go blue with cold.

Steadily Iain yanked at the rope. I began to slide, claustrophobically, the ice above just inches from my nose. As I slide, my jacket rose up at the back, exposing my skin to the freezing ice. I held my breath, my hands began to get rope burn; after what seemed like ages I was pulled free. Everyone cheered as I whizzed down the slope laughing.

Abi Latham is a freelance writer, artist and graphic designer from England. She likes traveling and writing travel stories and articles which are inspired by her time living and working in New Zealand and Australia. Her writing has been published in TNT Magazine, Spirit and Destiny and Scottish Youth Hostel Magazine.

www.gonomad.com
This article was last updated Nov 20, 2018 @ 7:20 pm
If we've inspired you to travel with this story, why not check out the prices to get there and make it happen. Search airfares, hotels, and rental cars here. Thanks!