The Charm of Mykonos

This story begins in Valencia, Spain. I had been planning a backpacking trip around European countries, but I was unsure of where my ultimate destination should be. Then, one day, I stumbled across a picture on the internet.

It depicted a heavenly place and I could not ignore the feeling that it stirred in me. I clicked on the photo to read more about this amazing destination -–Mykonos–, one Greece’s many islands, and the one which I knew would be my favorite stop on my backpacking expedition.

We arrived at Athens airport at noon and quickly realized that the language barrier would cause us problems. Our English was not enough to get by, and people did not want to stop to help us communicate.

We were unable to understand the complex letters and symbols of the Greek language, and we could only guess about Athen’s subway lines and transportation. After getting lost for hours on the train, and touring some of the more neglected areas of the city, we finally found our hotel.

The accommodations were horrible: dirty, unfriendly service and the building was ancient. We could not have expected much for the price we paid, although the website had been much more promising.

By that time it was almost dark, and we went out to do some evening exploring. It was then we discovered that in Athens they sell “iced coffee,” called freddo cappuccino. It was the first city in Europe where we found our beloved drink so easily.

They sold iced coffee at every corner and it was ridiculously cheap: one euro! And it was also very tasty. The next morning we discovered that not only the coffee was cheap. Everything was. Food, clothing, perfumes. EVERYTHING.

We spent the second day in Athens, exploring famous sites such as the Acropolis and enjoying the cheap food and shopping.

We went to bed early that night, to prepare for our journey to Mykonos the following day.

From Athens to Mykonos

Next morning we reached the ferry station to the island of Mykonos. The trip takes about 4 hours by ferry and is a very nice and affordable ride. Mykonos is one of the many islands of Greece, the most populated and most famous as a tourist spot.

It is said that Mykonos is the liveliest island, highlighting the discos on the beach and many clubs. This is one of the aspects that make it famous, however, Mykonos is much more than that. it is the perfect place to get lost and find oneself.

Mykonos keeps a traditional architecture, where the common home is white with blue flashes on doors and windows.

Mykonos Island is divided into two parts, Chora and Ano Mera. We arrived at the ferry port and we got on the only bus route that the island seemed to have. We did not have a map or a very good way to reach our hotel, armed with only the brief notes sent from our host.

We stopped once for directions, and through gestures and a mixture of English and Spanish, we spoke to a handsome and friendly villager who directed us where to go.

We were trying to find Angelika, and we were not sure if it was the name of the owner or the resort’s name. After about 15 minutes we decided to get off the bus on instinct, or perhaps simply because of the intense heat. We got off the bus and realized that there were no signs of anything. No streets, no numbers. We definitely were not in the town center, although we could see it from where we were.

It was desolate and hot, and after a few minutes we found a couple and asked if they knew Angelika. We did not know if they could be trusted, but they seemed to understand us very well. We understood that we had to keep walking. Ten meters before reaching what looked like suites, a car driven by a young woman who called my name “Michelle?”

It was Angelika. She was so surprised that we had found the place. She had gone to the port in order to pick us up, and when we weren’t there she headed back.

Finally, we had arrived– and her small resort was beautiful! It was somewhat rustic, but clean and cozy, with a magnificent view. I have to admit that almost any place on the island has a great view. The best part is that we were only twenty minutes walking distance to downtown.

We were staying for two nights and three days, so we had the opportunity to tour the town, visit cafes, and spend the nights watching the beauty and vastness of the Aegean Sea.

Our favorite beach was called Hornos in the Agios Sostis area. It was a place perfect for sunbathing, swimming in crystal clear water and enjoying the sun while being surrounded by people, tourists and locals alike who, just like us, were just enjoying, drifting, and watching the sailboats pass by.
All the streets of downtown converged at a waterfront esplanade, from where we could see the windmills. In addition to all restaurants, Mykonos was full of handmade art. All kinds of items of clothing, jewelry, ornaments.

We had to visit them all! I wear the jewelry that I got there, and to this day I regret not buying a beautiful handmade lighthouse, as the nature of our trip left room for only the essentials.

The famous Mykonos windmills are the symbol of the island. The images that started this adventure were of those windmills, and I was so excited to visit them in person.

In the village and near the port, there were two museums that seemed very promising: the archaeological museum and the naval museum. We just could not escape the charm of the island. We wanted to see everything, from the town center to the beaches and nature. Our explorations even included a visit to the first temple on the island, an interesting place saturated with visitors young and old.

On the third day, and our last at Angelika’s resort, we went to the center to see a friend from Chile who invited us to stay on the other side of the island. The hotel we booked for the three nights was in Ano Mera, a place with fewer residents than Chora, and so we needed to prepare for our stay. While my friends went to do the shopping, I waited in a laundromat and tried to get us a taxi.

It was an extremely frustrating task. Not for the lack of vehicles, but for the excessive throng of tourists arriving in each one. After two hours with no success, I decided to alleviate some stress and beat the heat with a delicious Cappuccino Freddo.

When my friends returned, we finally caught a taxi that took us to one of the most amazing places I had ever seen. The hotel was completely isolated, no buildings around. And although the picture looked beautiful online, it did not do the scene justice. When we finally arrived and we stood on the main terrace, the view was infinitely more beautiful.

The hotel facilities were quite good, and unlike the previous suite, were not rustic.

The room was charming, every detail well-kept. The hotel had a pool and Jacuzzi. It was not a big property but had unique access to the beach which made it special. Although it was dark and a bit cold, we could not contain our energy and ran straight to the water.

There were some large rocks in the dark that I must admit worried me, but I was too excited to care. It is a truly invigorating feeling, a feeling of freedom and infinite happiness in so pure and an unspoiled a part of the world.

The Perfect Place to Find Yourself

Next morning we could see everything more clearly and it was even more beautiful. A picture of clean water with huge rocks and small fish, all blue, all green, and all natural. We swam, we snorkeled, and then just sat in our hotel room, admiring the view of the sea and the mountains.

Even a trip this perfect must end, and on our last day, the hotel staff drove us back into the city center. From there we took a taxi to the Mykonos airport. And while it is quite small, it has connections with major cities in Europe making it an easy destination.

There is no excuse to miss out on Mykonos. By air or by sea you can get the island which will undoubtedly be one of your favorite destinations for life. Writing about my time there, all I could remember was the sea breeze and perfect views, the way the air smelled and the water felt. It truly is the perfect place lose yourself, to find yourself: Mykonos, in the Aegean Sea.

Places to stay in Mykonos: Angelika’s and Mykonos Star Hotel. 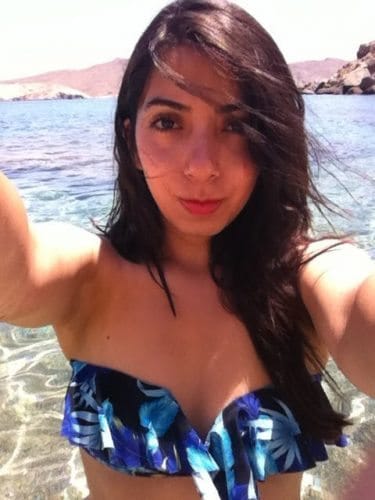 Arantza Barrientos, 23, is a law student who loves to travel and enjoy learning about new cultures, and living new experiences. She is from Guadalajara, Mexico.