Meet Me in Atlantis

Meet Me in Atlantis: An author’s obsessive pursuit of the fabled lost city 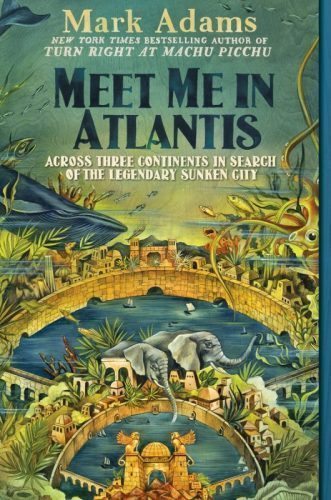 People have been fascinated by Plato’s descriptions of Atlantis in the Timeas and the Critias since they were written. The descriptions are tantalizing because Plato in the Critias gives a very explicit placement for the sunken island, including measurements and geological features.

Since there are apparently no sunken islands in the Atlantic outside the Pillars of Hercules matching Plato’s description, many people have concluded that Plato invented the tale to make a philosophical point. Mark Adam’s new book, Meet Me in Atlantis is a modern day quest to find the elusive Atlantis, using hints in the text as well as more modern methods.

The fact that no island can be found has not deterred some Atlantologists. Locations from Crete to Morocco have been suggested. Each site has it pluses and minuses. The author does an excellent job of tracking down the proponents of each site and getting an explanation of why it should be considered Plato’s Atlantis.

In the process of traveling from Malta to Spain, the US, and many points in between, he discovers fascinating archaeological investigations. It’s clear that in ancient times the area around the Mediterranean was subjected to repeated cataclysms from the explosion of Thera to tsunamis ravaging the coast of Spain. Using ground-penetrating radar, archaeologists have been able to locate some of the ancient cities and map them using advanced technology.

I loved this book. I have always been fascinated by archaeology and by the Atlantis story. This book gives a comprehensive view of what some of the most well-known people in the Atlantology field think today.

My only disappointment was the ending. I can sympathize with the author. It’s hard to decide which theory to believe, however, I felt that he tossed out too much evidence to come to his preferred choice. However, that has nothing to do with the quality of his research.

Excerpt from the Book
Prologue: Lost and Found?

We had just met the previous week in Bonn, my new German acquaintance and I, and here we were on the west coast of Africa on a hot Thursday morning, looking for an underwater city in the middle of the desert. Our destination was an unremarkable set of prehistoric ruins. The shared interest—about the only thing we had in common—that had brought Michael Hübner and me together in Morocco for what felt like a very awkward second date was Atlantis. Hübner was certain he had found it.

Hübner was far from alone in this belief. I’d already met plenty of other enthusiastic Atlantis seekers who’d used clues gleaned from Renaissance maps or obscure Babylonian myths or unpublished documents from the Vatican Secret Archives to pinpoint its supposed location. There did not seem to be a lot of consensuses.

Morocco was the eighth country on three continents that I’d visited as I pursued those who pursued Atlantis, the legendary lost city. I’d become as fascinated by them as they were by their quest. I hadn’t seen my wife and children for a month.

Hübner’s unique search strategy was data analysis. He had scoured ancient literature for every mention of Atlantis that he could, and then plugged that data into an algorithm far too complicated for a math novice like me to understand. His results were clear, though. According to his calculations and the laws of probability, the capital city of Atlantis had absolutely, positively existed just a few hundred feet ahead at the nexus of GPS coordinates we were tracking. “It is very, very improbable that all these criteria are combined by chance in one area,” he had already told me several times, his monotone voice betraying not the slightest doubt.
I wasn’t so sure. Perhaps the defining characteristic of the landscape around us, the foothills of the Atlas Mountains, was its complete lack of water. Twice on the way here my driver had slammed on the brakes to avoid crashing into herds of camels crossing the road. The one thing that everyone knows about the legend of Atlantis is that it sank beneath the seas.

Hübner had a ready explanation for this aquatic discrepancy. An earthquake in the Atlantic Ocean, a few miles west of where we were hiking, had caused a tsunami that had flooded the Moroccan coast and then receded. The ancient story of this deluge had simply gotten garbled over generations of retelling.

A few months earlier, I would have said Hübner’s explanation sounded crazy. Now it had a very familiar ring to it. I had heard a lot of location hypotheses that hinged on tsunamis and other improbable agents: volcanic explosions, mistranslated hieroglyphics, the ten biblical plagues, asteroid impacts, Bronze Age transatlantic cocaine tracking, and the Pythagorean theorem.

All of these ideas had been presented to me by intelligent, sincere people who had devoted large chunks of their lives to searching for a city that most reputable scientists dismissed as a fairy tale. Most of the university experts I’d approached about Atlantis had equated the futility of searching for it with hunting down the speci c pot of gold that a certain leprechaun had left at the end of a particular rainbow.

Now I was starting to wonder if I’d been away from home too long—because the more of these Atlantis seekers I met, the more their cataclysmic hypotheses made sense.
Perhaps the second most famous attribute of Atlantis was its dis- tinctive circular shape, an island city surrounded by alternating rings of land and water. At the center of those rings, the story went, stood a magni cent temple dedicated to the Greek god Poseidon.

That innermost island, with its evidence of an advanced civilization suddenly destroyed by a watery disaster, was the proof that every Atlantis hunter most longed to nd.

Incredibly, this legendary island’s precise measurements, as well as the dimensions of the temple and the city’s distance from the sea, had been handed down from the philosopher Plato, one of the greatest thinkers in Western history. The clues to solving this riddle had been available for more than two thousand years, but no one had yet found a convincing answer. Hübner insisted that according to his own calculations, what we were about to see was close to a perfect match.

Hübner wasn’t an especially chatty guy, so we trudged silently up the slope, the only sounds coming from our feet scraping the sun- baked ground and the occasional bleating of stray goats. Finally, the incline leveled o and we looked out onto a large geological depression, a sort of desert basin enclosed on all sides. I leaned against a lea ess tree and wiped sweat from my eyes.
“You remember how I showed you the satellite photo, how it was like a ring?” Hübner said, waving his hand across the panorama. “That is this place here.”

Of course I remembered. The image he’d shown me on his computer screen was like a treasure map leading to Atlantis; it was that photo that had convinced me to come to Morocco. I scanned the horizon from left to right and slowly recognized that we were stand- ing above a natural bowl, almost perfectly round. In the middle was a large hill, also circular—a ring within a ring.

“On that hill in the center is where I found the ruins of the gigantic temple,” Hübner said. “You can check for yourself the measurements. They are almost exact with the story of Atlantis.” He sipped from his water bottle. “I would like to show this to you. Do you think maybe we should go down there?”

Mark Adams is the acclaimed author Mr America, which The Washington Post named of Best Book of 2009, and the New York Times bestseller Turn Right at Machu Picchu, which Men’s Journal recently selected as one of the Fifty Greatest Adventure Books of All Time.

His work has appeared in many national publications, including ESPN: The Magazine, GQ, New York and the New York Times. He lives near New York City with his family.

Buy this book on Amazon: Meet Me in Atlantis My Obsessive Quest to Find the Sunken City