Near the Positano coast, Italy, kayaking in a perfect place

The bus driver, well-experienced with the narrow hairpins, plunges ahead with horn shrilling. A large bus, coming the other way, rounds a crag of limestone and suddenly fills my bus’s windscreen. Horns shriek from both sides.

The drivers exchange shouts and I strain to understand their words in the region’s dialect. First-time tourists near me grip their seats, and whisper My God!

It’s my fourth time on this coast, and I’ve never heard of a bus going over the edge. If the window could open, I’d hang my head out and not mind the dizzying drop down the sheer cliff to the sparkling sea. In spite of my prior trips, I’m flabbergasted at the beauty.

My rental apartment in Praiano has a view of the Li Galli islands, and a vast expanse of sea and sky whose changing hues of blues and pinks at sunrise and sunset are mesmerizing.

Praiano, a small town near Positano, is less glamorous and less crowded than its famous neighbor. Praiano may seem sleepy but it’s got a happening beach club called One Fire. More personable and not as inundated as Positano’s beaches, One Fire is run by the gregarious Piccoletto, whose aim is to ensure that a great time is had by all. From him I learn that I can rent a kayak.

Piccoletto doesn’t ask for un documento as is the norm when renting something in Italy, and he tells me I can pay later.

And there I am, paddling over a gently rocking emerald and indigo sea. High above me are Mediterranean Pines, and a dome of a church covered with colorful, locally-made majolica tiles.

Hotel Perched on a Cliff

I row past the deluxe Hotel San Pietro, perched on a particularly precipitous cliff, and then past the villa that used to be owned by the film and opera director Franco Zeffirelli. Stone walls sprout from cliff edges holding in terraced gardens, citrus and Linden trees. I see wisteria covered pergolas, tomatoes on trellises, and Jasmine fringed pathways.

The villa is white as lightening. From my vantage point on the sea it lures me like a Siren. To imagine owning such a place; my spine tingles and my heart is awe struck. Zeffirelli sold it in 2007 at the age of 87—no longer able to traverse the steep steps that are unavoidable in this vertical landscape. Called Tre Ville, it is now, you guessed it, an exclusive hotel.

Nearing Positano I come upon an empty beach surrounded, of course, by steep cliffs. It appears the only access to the beach is by sea. I stop there, and hang out, with the place to myself. The water is sapphire colored and I cannot resist a swim. It is clean, clear, warm, and buoyant.

On the way back I come to my lunch destination, a cove with a pebbly beach that sports a smattering of orange lounges and an airy trattoria on stilts. This is Bagni D’ Arienzo.

“Tell Peppe I sent you.” Piccoletto had instructed me.

I climb the wooden stairs to the deck of D’ Arienzo and introduce myself to Peppe. His lean and muscled body is adorned only with swim trunks.

“Is it near Florida?”

“Who taught you geography?” I say laughing.

He shows me the blackboard with the catches of the day.

I have my choice of tables and I sit at the edge, hanging my head over the beach, looking out to the luminous blue water streaked with momentary white arrows from passing boats.

By the time Peppe fills my glass a second time I’m having a problem. No, it’s not that I’m not used to two glasses of wine in the afternoon. It’s a different problem.

“I want to live here. I want to be doing this very thing. This beach, this restaurant.” I tell Peppe.

“It’s not all dreamy. We work hard. Every day. Do you have EU citizenship?”

“No. That’s the bane of my existence.” I say ruefully.

“You gotta get married. What about Adriano?” He points to his co-worker.

Before I paddle back to One Fire, I sleep on a lounge, and then I can’t resist one more swim. The hourly kayak rental will be exorbitant. But no matter. Even George Clooney couldn’t have ordered up a more perfect afternoon.

It’s 6:00 when I paddle up to One Fire, but causal Piccoletto hasn’t been worried about me.

“Long lunch.” He says with a smile as he pulls the kayak with me in it, onto the boat launch. I tell him that Peppe gave me extra wine and it caused me to fall asleep on the lounge.

That night I head to a simple eatery called Che Bontà where the close-together outside tables are stacked on steps cut into the hillside. While waiting for my food, I examine a map of the trail that I’ll walk the next day, called Il Sentiero degli Dei (The Pathway of the Gods.)

“Hey, you’ve got a map of the trails!” The man at the next table exclaims. “We’ve just heard of it. We’re doing it tomorrow.” He seems far more enthusiastic about it than his wife.

“You’re going to do it ALONE?” She says, turning to look at me as if I’m daft.

Yup.” I could tell her that I walked alone on the Via Francigena for 40 days, but I refrain.

Pathway of the Gods

The next morning I take a bus to Amalfi and then one that climbs high into the mountains to the town of Agerola. There are other ways to start this hike; from Praiano, the town I’m staying in, there’s a trail heading up to the pathway of the Gods.

But that would be a vertical climb. Far better to start up at the top, (from Agerola) on a horizontal rather than a vertical path.

The trail treats me to panoramas of the long promontory of the Monti Lattari snaking out into the dramatic blue of the Tyrrhenian Sea, with the isle of Capri like the dot of a question mark—the last point of land the eye can see.

These are the best views you can get on a peninsula that overflows with stunning views. Thyme and heather provide a soothing scent as I trek under the warm sun, and the gnarled stems of the Ped’e palomma, an ancient grape varietal, show me the fortitude of past generations who terraced these steep cliffs.

Far below I can make out Praiano–its white homes (built from local pumice stone) stacked on the cliffs. A picnic bench tucked next to the trail about half way along, gives me a place to eat my panino.

A Peregrine falcon floats by at chest level. Perched as I am on the mountain’s edge with the world so far below, I can easily imagine being a falcon, circling in the exhilarating crystalline air, tasting freedom.

In three and a half hours I arrive in a hamlet of stunning views, called Nocelle. Fuchsia bougainvillea gathers in celebration on terraces. On a stone wall is a scene created in tiles. There’s a temple, and a topless Goddess. It says Villa degli Dei. Villa of the Gods.

I push on, another thirty minutes to Montepertuso. My calves are done in, and I forgo the stairs down to Positano and take a bus. In Positano, slurping a slushy lemon granita is the perfect way to settle back into the human world after my hike in the realm of the falcons and the Gods.

Many travelers on this coast use the buses in lieu of rental cars or private drivers. The buses are easy to negotiate, however in high season they are extremely crowded. An alternate option is to have your hotel arrange for a taxi.

Do-it-yourself kayaks can be rented from Piccoletto at One Fire in Praiano or if you prefer to be taken on a kayak excursion, check out Mariella’s operation at Positano’s Fornillo Beach.

There are no places to get food along the Pathway of the Gods. I recommend packing a lunch, or be sure you’ll get to the end of the trail between noon and 1:00 in order to find eateries open in Nocelle or Montepertuso.

Wear sturdy shoes and sunblock, and bring at least 24 oz of water, and an appetite for dramatic landscapes.

I recommend late Spring or Fall. July and August are extremely crowded and hot, and the coastal road is so congested that it takes hours to get anywhere.

I booked my Praiano apartment on Trip Advisor. AirBnB is another place to find rentals in the Amalfi Coast towns. There are also lots of companies that rent villas. One I’ve used is called Summer in Italy. 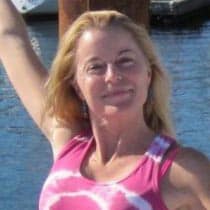 Chandi Wyant is a historian, foodie, writer, and passionate Italophile. She’s currently working on a manuscript about her 40-day walk on Italy’s pilgrimage route. She runs a website about travel and expat life.