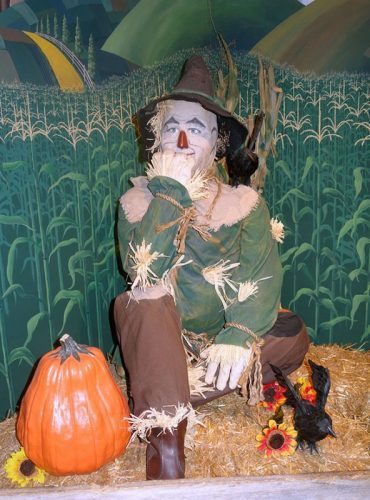 “There’s no place like home,” was the entreat repeated three times by Dorothy before she and her dog Toto miraculously returned from the emerald city of Oz to Wamego, in rural Kansas. Strange thing though, she had the power to return from fantasy land to reality the entire time.

Wamego is a small mid-western town by any definition and is located just north of Interstate 70 and east of Manhattan. It’s just short of a two hour drive from Kansas City and makes for a nice drive when coupled with a scenic drive of the Flint Hills of Kansas. Most of all, it’s a town that has embraced The Wizard of Oz.

The story of Dorothy and Toto has been an endearing classic since L. Frank Baum wrote The Wonderful Wizard of Oz novel in 1900. When it was turned into a Technicolor extravaganza by Metro-Goldwyn-Mayer for the big screen in 1939, it would feature a scarecrow who wants a brain, a tin woodman who badly craves a heart, and a cowardly lion who desperately needs courage.

And to showcase the colorful virtues of Technicolor, Dorothy’s shoes would undergo a color change from silver in the book to ruby red slippers in the movie.

For those who cherish the home grown American fairy tale of what has arguably become an icon of American pop culture –why, even the wizard is from Omaha – there’s still no denying the universal appeal of The Wizard of Oz. It’s a timeless attraction that cuts across generations and borders, with a message that underscores that the power is always within.

That becomes obvious when you pass by a replica of Dorothy’s home at the corner of Highway 99 and Highway 24 in Wamego. It is easy to spot the black and white stripped leggings and ruby shoes on the Wicked Witch of the East, who as the story goes, was crushed underneath the house when the tornado deposited the home on the unfortunate crone.

Head next to the rather smallish downtown area of Wamego,  where you will find a red brick building on Lincoln with a huge sign that marks the Oz Museum. (All roads may not necessarily lead to Wamego but the Yellow Brick Road certainly does!)

Experience the land of OZ in Kansas

The OZ Museum has over 2,000 OZ-related artifacts on display as well as detailed historical facts about the movie and actors. However, it isn’t confined to the MGM musical starring Judy Garland only, as it covers an earlier Oliver Hardy silent film where Hardy played the Tin Man and goes contemporary by covering “The Wiz” starring Diana Ross and Michael Jackson.

The museum showcases over 100 years of OZ history in the process, starting with the 1st edition of L. Frank Baum’s book to current collectibles.

Once inside the museum you enter the realm of Dorothy’s world, beginning with her Kansas farm home and then entering the Yellow Brick Road as she journeys to the Land of OZ. Along the way you will meet her triad team of unlikely heroes as well as the villains that will try to thwart her journey – mostly wicked witches.

Be sure to catch the ruby slippers on display, hand-crafted with over 3,500 Swarovski crystals and created by artist Jeffery Merrell to commemorate the 50th anniversary of the movie. These aren’t the originals but are probably more dazzling. The museum tells you that there were seven original pairs of ruby slippers made for the movie, but it will also tell you where the four remaining pairs ended up. (The original ruby slippers are considered to be the most valuable film collectible in movie history).

There’s also a reproduction of the Haunted Forest sign that warns Dorothy and her intrepid team to turn back. Plus, the yellow brick from Baum’s military grade school and other props from the Broadway musical Wicked are interspersed throughout the museum.

Though small by footprint, a swatch from the inside hem of the original dress Judy Garland wore in the movie is framed with her photo. And there are TV, Broadway musical, and movie memorabilia – some with autographs – as well as miniature fling monkeys used in the movie’s production.  Be sure to look for the rare autographs of the original actors that played Auntie Em and Uncle Henry.

Upon exiting the museum exhibits, you will encounter a larger-than-life-size rendition of the Tin Man. Take advantage of this opportunity for the inevitable selfie photos. Be sure to save time for the gift shop, as they have a vast collection of Wizard of Oz memorabilia for children to seniors.

Make time for Mexican food at Toto’s Tacoz a couple doors down then head over for a wine tasting  at the Oz winery. Here you’ll find an array of whites, reds, and blushes with OZ-related names such as Yellow Brix, Flying Monkey, and Squished Witch.

Most of all, don’t miss seeing the Columbian Theatre where you will be inspired by rare paintings from the 1893 Chicago World’s Fair. Contained within are six huge oil paintings that were commissioned to romantically commemorate American industry and agriculture.

The connection with the Wizard of Oz is that Baum was apparently inspired by the white Beaux-Arts at the Chicago Fair and used it as a conceptual framework for modeling the Emerald City in the Land of Oz.

Going to OZ in Kansas?

Karin Leperi is an award-winning travel writer and photographer with around 1,500 published bylines in over 95 outlets. Her interests run the gamut from travel, culture, cuisine and cruising to photography, nature, wildlife and the environment. Her travels have taken her to 94 countries and she is looking forward to meeting the “100” countries milestone.