At 8:30 in the morning in Phuket, Thailand’s largest island, it was already very hot and humid and my husband, Bob, and I were sweating bullets.

We had just walked at a brisk pace for 25 minutes or so, along the beach and then down a very narrow and dingy alleyway that forced us to sidestep muck and puddles.

We were headed to the agreed upon rendezvous point. I could tell by the look on Bob’s face that he was beginning to wonder what I had committed us to do for the next 10 days.

The reason we were here at all is that I had noticed a post on Facebook. It concerned the horror of the dog meat trade in SE Asia. I found it appalling.

So Many Stray Dogs

Having traveled extensively throughout South East Asia for the past 20 years, I have always been very upset by the large number of stray dogs roaming the streets and their overall poor condition.

Some are ravaged by mange, others have broken limbs and some are obviously starving. I wanted to help them and also the dogs rescued from the horrors of the dog meat trade

I will admit, that I had some apprehension about the experience. I was anticipating seeing suffering and mistreated animals in a dirty, smelly noisy environment. When we first arrived after riding in the back of the truck providing complimentary transport from the center of Naiyang to the shelter, my anxiety vanished immediately.

The compound was already a bustle of activity with veterinarians at work with treatments, administrative staff hustling around, and groups being given tours of the facility.

Happy and Well Cared for Dogs

At just 3 years of age, Finch was blinded. Trying to survive on the streets, this beautiful boy was hit by a car, sustaining such serious injuries to both his eyes that he lost his sight. It is only thanks to people like you that he didn’t lose his life.

It was immediately obvious that the dogs were happy and well cared for. Most are housed in large pens where they can run and play, in addition to their time outside with the volunteer walkers.

Bob and I were assigned to the “Dog Meat Trade” run. All the dogs (15) in that run have been rescued from a horrific and unimaginable fate.

Our main task was to spend time with the animals, brush them and get them used to walk on a leash. They were so very happy to see us arrive in the morning, rushing towards the gate and trying to sneak out of the enclosure for some one on one time with you!

One of our favorite dogs was Bangkok Bob. Bangkok Bob was rescued from a Vietnamese truck heading to the Lao border after being snatched from the streets of a Thai village. He was crammed in a very small cage with several other dogs, and unable to move at all.

When the truck was intercepted with the help of the Thai authorities and staff from Soi Dog they noticed his back legs were paralyzed.

Even though his back legs won’t carry him, he likes to go for walks, and his front legs are very strong. He is a beautiful dog, full of energy. A group of kind volunteers sent a wheelchair for him from Australia.

My favorite dog was Danish, so very elegant with silky hair. It took her a while to trust me, but once she felt comfortable she would beg to be taken for a walk.

She was very sweet and mellow in the large enclosure with the other dogs, but once on a leash, she would lunge at other dogs as soon as they came near her. The dog behaviorist speculated that might be the result of having had to fight for food when she was in the larger shelter in Buriram, Northern Thailand after her initial rescue. She is not a big and imposing dog, so she would have had to fight to establish her place.

I had the chance to meet so many dedicated volunteers from all over the world: David from Melbourne, Rita from Lisbon, Anne from Los Angeles, Marc from Amsterdam and Jonathan from England. Jonathan is from London and has been a veterinarian for two years.

Giving up Vacation to Help

He donated several weeks of his vacation to help animals in need at Soi Dog. He found the organization via the WorldWide Veterinary Services (WVS) .

Last year he went to Rajasthan, India for 3 months. When volunteering abroad, not only do you have the chance to make a difference but with such a wealth of interesting and generous people, lifelong friendships can be forged.

On our last day volunteering at Soi Dog, we had the chance to meet the co-founder of Soi Dog, John Dalley. John and his wife Gill had married in Phuket while on vacation, and in 2003 they decided to retire there.

They quickly realized the island had a massive stray dog problem that was growing rapidly, many of these dogs were sick and suffering. Thailand is a Buddhist nation, and because of this, euthanasia is unacceptable. However, it is acceptable to put unwanted puppies and kittens on the streets and let nature take its course. They wanted to try and help.

Working together with Margot Homburg Park, a woman who had also moved to Phuket at about the same time, the Dalleys started spay/neuter clinics around the island and founded the Soi Dog Foundation.

Twelve years later, they have reached stunning results, with over 97,903 dogs and cats sterilized. This means that 80% of the dog population on Phuket has been sterilized. This will ensure a much better quality of life for the existing population and prevent unnecessary suffering, as the local people can take care of the dogs and not feel overwhelmed.

John and Gill are also actively advocating against the Dog Meat Trade. This is an uphill battle on a scale that is mind-boggling!

For every single dog that they saved from the Dog Meat Trade, countless others are going through HELL on a daily basis and we are talking millions. One might say, why bother? It is like a drop in the ocean.

Because you need to start somewhere. And start they did! They were instrumental in the passing of the very first animal welfare law in Thailand. The first country in Asia to do so. By raising visibility on this horrendous practice they are educating millions of people and through this process, drastic changes will happen.

I didn’t know the truth behind the Dog Meat Trade! I I had no idea how cruel and horrific this was. I thought people ate dogs as a last resort because they were poor and couldn’t afford anything else.

It turns out it is a luxury meat and it is believed that the longer the animal suffer the better the meat will be. Since there are no laws in Vietnam protecting animals, the thief will not hesitate to steal pets from the streets and then do the unimaginable.

They will even break into houses, capture the animal and drag it by a rope behind a scooter or a car. A 30-pound dog is worth approximately $100 when sold for meat.

Soi Dog Foundation (SDF) at the moment has 1300 dogs waiting to be adopted in Buriram in the North East of Thailand. These dogs have all been ceased from Vietnamese traffickers coming into Thailand to capture as many animals as possible.

With the help of informants paid by SDF and the Thai authorities, these traffickers were intercepted and the dogs rescued. SDF built huge shelters on Government land at Buriram livestock center capable of holding up to 4,000 dogs at a cost of around 500,000$. SDF pays for all the food and drugs/vaccines etc., on an ongoing basis.

The shelters are quite isolated and difficult to get the dogs rehomed in Thailand. SDF is building relationships with some US and Canadian rehoming centers to find homes for these dogs as although conditions at Buriram are far better than before it is still no place for these dogs to spend the rest of their lives.

With the help of informants paid by Soi Dog and the Thai authorities, these traffickers were intercepted and the dogs were rescued. The animals are now held in a former cattle facility and are the property of the Thai government.

Very limited veterinary care can be provided. The Soi Dog Foundation pays to feed them and has paid to improve to the facility. But there are still 20 to 30 dogs that die each month mostly because of fighting. Several others become sick. It is such a tragedy. But thanks to Soi Dog several dogs have been adopted internationally.

The Brigitte Bardot Foundation just adopted 13 animals. They will need to be quarantined for three months at the Soi Dog facility in Phuket. While there, they will receive stellar care from the vet team, the animal behavior will evaluate them and the volunteers help to socialize

them as some are quite traumatized by such an ordeal.

Thailand’s first hospital for street dogs opened recently in Phuket. Soi Dog Foundation photo. Then they will be flown to France. For each of these 6 dogs, so many are still in a dire situation.

Soi Dog Foundation has established a “Flight Volunteer Program” to assist in the cost of flying animals all over the planet.

They take care of everything. A Soi Dog representative will bring the animal to the airport, meet the passenger there prior to the flight and check the animal in. Upon arriving at the destination the passenger is met by the adopter. There is no work or expense on the part of the traveler.

Improving the visibility on the volunteers’ flight program would be a great help. It costs between $2000 and $3000 to ship a dog as cargo to a western country. With a flight volunteer only $300! Easy to do the math on that one.

They do quite a bit of adoption in Canada and the US from the Dog Meat Trade. So if you know anyone traveling to Bangkok this would be a tremendous help at zero cost

They have approached by Vice Governor of Bangkok to launch a major sterilization program for the estimated 640,000 stray dogs in the Bangkok area alone. In cooperation with the UK Dog Trust they would aim at sterilizing 80,000 animals per year. They are ready to go and have the mobile clinics ready and are only waiting for the green light.

Celebrities such as British music Pop Idol winner Will Young, Ricky Gervais, and Dame Judy Dench are lending their voices against the horrific dog meat trade.

Now we are back home in Washington, DC. I think about these beautiful animals every day. I take comfort in knowing “our dogs” will soon be in their forever homes, adopted by people from all over the world.

I keep on volunteering for Soi Dog from this side of the world, trying to find homes for the many other animals that still need a loving family.

If you wish to volunteer for Soi Dog please contact: volunteering@soidog-foundation.org 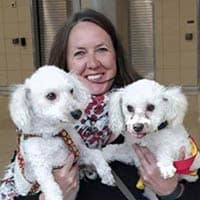 Chantal Briere runs a cycle touring business that takes riders all over the world. Originally from Quebec, she now lives in Washington DC.