Billed as the “Silver Capital of the World,” Wallace is a living ghost town located in what is known as the Silver Valley of northern Idaho.  And though the town has 784 residents, nevertheless, Wallace packs a powerful punch for its small size.

These days, Wallace has found its silver in the lucrative business of tourism, claiming to be the “Center of the Universe” and being the staging center for forays into a gilded past of the Wild West.

Of Miners and Millionaires

It all started around 1880 when Andrew J. Prichard discovered gold near the North Fork of the Coeur d’Alene River. However, the pickings soon proved to be meager.

But as any hard-rock underground miner knows, where there is gold, there is silver. By 1884, silver was discovered on the south side of the Coeur d’Alene Mountains, near Wallace, along with base metals such as lead, zinc, and copper.

Wallace: The Silver Capital of the World

From1884 to 1985, Silver Valley produced over one billion ounces of silver and extracted over $5 billion worth of metals from the high mountain terrain. Obviously, this brought new-found prosperity to the many isolated towns that dot the valley.

In 1920, Wallace had the greatest number of millionaires per capita in the country – a direct result of the plenteous silver mines in the area. So the burgeoning millionaire class developed a need to showcase their wealth through high-end architecture.

Thus, the millionaire mansions were built with Victorian opulence – each ostentatious home designed to outshine the other. Other styles emerged to include neoclassical, Renaissance revival, Queen Anne, and art deco.

Of course, with fast money came fast times and Wallace made sure it offered plenty of pleasures and diversionary delights that only dollars could buy.

A bawdy boomtown of bars and brothels, Wallace had the dubious distinction of living in sin – a rough town catering to miner’s basic needs and greed. That was then.

Nowadays, Wallace easily acknowledges its torrid past with ladies-of-the-night. (The last brothel closed in 1988). Never legal in Idaho, the brothels supported miners flush with money looking for gambling and girls as diversions from their hard life underground.

Wallace also acknowledges that it is a town of people afflicted with resiliency of spirit when confronted by adversity, something akin to the saying: “Don’t tread on me.”

Rick Schaeffer, resident and self-appointed Prime Minister of Wallace, recalls that the town was even wayward in opposing the “Feds” on various occasions.

Government intervention came about due to classic mining wars, union uprisings, and other intrusions to miners. It met with strong resilience and an earnest desire to not be controlled.

These long-held beliefs guided the town’s hand resulting in such events as Historic Wallace holding up the Federal government’s construction of I-90 through town for 17 years by declaring the entire town as historical.

As a result, Wallace became the last stoplight on the interstate between the Atlantic and Pacific Oceans.  In 1991, the FBI raided all gambling establishments: This was considered payback by the populace for Wallace’s previous intransigence.

However, that same resiliency has helped Wallace find the silver lining where once there was silver. By capitalizing on its beginnings of mines, railroads, and brothels, Wallace offers a variety of activities and museums that attract visitors from around the world.

Stay at the conveniently located Wallace Inn, right off the interstate, and leave your car parked in the lot: Everything in town is within easy walking distance.

Shaeffer recommends that visitors first “hang” out on the storied streets of Historic Wallace and soak in the Western boomtown atmosphere.

After all, this is about as authentic of a Wild West experience as one can come by plus Wallace is more family-friendly than ever. Be sure to sample the many eateries along with special microbreweries at the watering holes. (All the buildings in the town of Wallace are listed on the National Register of Historic Places).

Next, learn about the heyday of railroads at the Northern Pacific Railroad Museum on 219 Sixth Street, an elegant chateau-like depot that was moved one block when the Interstate came through.

Visit the Oasis Bordello Museum for a “frozen-in-time” peak on how the ladies lived and the rates they charged for a sundry of services. Catch a melodrama with heroes, heroines, and villains of yore at the Sixth Street Theater and Melodrama (www.sixthstreetmelodrama.com)

For a foray into the silver mining past, join a hard-hat exploration of a silver mine with Sierra Silver Mine Tours (www.SilverMineTour.org).

A retired miner leads and narrates the way.  Follow this up with the Silver Streak Ziplines, where two zipline courses speed zippers at high speeds above Historic Wallace at speeds up to 55 mph. Headfirst!

Save time to shop for antiques, buy silver coins, sip a huckleberry shake, or find the center of the universe at the corner of Bank and Sixth Street, where a manhole cover marks the spot. Then find the town’s spaceship close-by.

Wallace is also known as much for its world-class bike trails, meandering through tunnels and over trestles boasting majestic mountain views along the way. Whether you bike the outrageously scenic Hiawatha trail or the fairly level grade of the Trail of the Coeur d’Alene, both are bound to please the most discerning bikers.

Route of the Hiawatha

Located off I-90 close to the Idaho-Montana border, the Route of the Hiawatha Rail-Trail was converted from an abandoned rail-bed of the Milwaukee Railroad to become a world-class bike trail.

Popular with locals and tourists alike, it opened in 1998 and expanded in 2001 with the addition of the 1.7 mile long Taft Tunnel as the centerpiece. And because the train tunnels are so long, helmets and flashlights are required equipment.

Lookout Pass Ski & Recreation Area is the home base for the Hiawatha and is where you can rent bikes for the 16-mile family-friendly scenic trail. Because shuttles take you to the starting point, it is a gentle 1-2% downhill grade, which makes it great for bikers of all ages. At the end of the ride, a shuttle returns bikers to the top.

According to Shaffer, “Biking the Hiawatha is like embarking on a magical mystery tour of adventure that showcases a host of diverse flora and fauna along with offering plenty of family fun.“  He adds that even though it is only 16-miles long and downhill, the shared experiences and memories are the real treasures that people take away with them.

“This is a supreme bike trail that encompasses sky-high trestles with incomparable views of the Bitterroot Mountains and river valleys below. And because the Hiawatha is horseshoe-shaped, bikers can see where they are going and where they have been. How cool is that?”

Trail of the Coeur d’Alenes

A non-motorized paved route that is fairly level, the Trail of the Coeur d’Alenes is open to bikers, walkers, skaters, skiers, and snowshoers. The 73-mile family-friendly path is a 10-foot wide asphalt trail with 20 developed trailheads that pass through seven mountain communities.

It runs from the mining town of Mullan, near the Montana border, all the way to the prairie town of Plummer, near the Washington state line. Along the way, you sample alpine scenery, the historic Silver Valley and the preserved town of Wallace, the chain lake region, the shores of Lake Coeur d’Alene and finally, the Coeur d’Alene Indian Reservation.

Constructed on the defunct Union Pacific Railroad’s right-of-way, the trail is a shining example of successful remediation of toxic tailings to outdoor recreation. By using clean soil, asphalt, and gravel, the paved trail helps stabilize and seal off toxic waste, thus preventing the century of left-over contaminants from entering surrounding stream channels.

However, bikers are warned to protect themselves from mine waste by staying on the trails, by washing hands and face before eating, and by eating only at designated waysides and trails.

Whether zipping the newly-opened Silver Streak, biking former “Rails-to-Trails,” touring old silver mines, or searching for the “Center of the Universe” manhole cover, Wallace has a little bit of silver lining to please the most discriminating of adventurous, family and offbeat travelers. 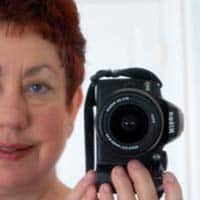 K.D. Leperi is an award-winning travel writer and photographer with around 1,500 published bylines in over 95 outlets. Her interests run the gamut from travel, culture, cuisine and cruising to photography, nature, wildlife, and the environment. Her travels have taken her to 94 countries and she is looking forward to meeting the “100” countries milestone.