The Rocky Mountaineer Train Across Canada

Ride The Peace Train: The Rocky Mountaineer A spectacular way to see Canada

When springtime hits the Canadian Rockies and winter ice cracks, beauty is laid bare. The sky turns the color of a sharp clear sapphire, snow-dusted mountain peaks sparkle and eagles soar. And perhaps nowhere on earth can one get a better view of such wonders than from the glass-domed observation car of the Rocky Mountaineer.

This luxury passenger train, chugging through the Canadian high country cutting across the Great Divide, offers stunning scenery and a serene escape.

Rail travel has long been considered the most civilized and romantic way to see the world, and here guests get a front-row view of North America’s most stunning landscapes.

The Rocky Mountaineer, which has received the World Travel Award for being the “World’s Leading Travel Experience by Train,” also garnered accolades from National Geographic, which calls it one of the “World’s Greatest Trips.”

However, its real romantic allure is the way it allows modern-day visitors to travel Canada from coast to coast along the same historic trail that early explorers and settlers took more than 100 years ago—a route spanning lands that, for the most part, have remained untouched since then.

Riding in the Daylight

The other beauty of this train trip is that riders have days to unplug from technology and connect with nature from the comfort of a cozy train car. How civilized to sip champagne and nibble on scones while keeping watch for bald eagles and black bears.

Before I boarded the Rocky Mountaineer in the little resort town of Banff, I enjoyed a 4-day driving trip through the Canadian province of Alberta.

There I first began my adventure in the capital city of Edmonton, where I dined in stylish bistros, visited its Ukrainian Cultural Heritage Village, and took a River Valley Adventure Segway tour along the glacier-fed North Saskatchewan River.

Stopping in the little mountain town of Jasper, in Jasper National Park, I stayed at the Jasper Park Lodge Fairmont in a cabin-like suite overlooking a teal mountain lake beside a large timber-lined lodge.

In Jasper, I enjoyed a Jasper Motorcycle Tour of Jasper National Park’s steep mountain passes and scenic roads in a Harley-Davidson sidecar, and I took the Jasper Tramway on a 3,000-foot ride up the side of Whistler’s Mountain. I also saw many animals in their natural habitat during a guided wildlife tour.

The little Alpine-style village of Jasper was also delightful to explore, with its candy and fudge shops, brewpubs and restaurants. After getting coffee at Bears Paw Bakery, I left for Lake Louise, driving a rental car down the most scenic highway in the world—the Icefield Parkway.

On the way, I stopped to check out the new Glacier Skywalk, a 1,475-foot long glass walkway jutting out high above the Sunwapta Valley and facing the Athabasca Glacier situated in an icefield straddling the Continental Divide.

I also went on an Ice Explorer excursion onto the surface of the Athabasca Glacier. Along this drive, I got a taste of the scenery that lay in store for me on the Rocky Mountaineer trip, as well as a glimpse of the luxury that the Fairmont properties in Banff, Vancouver and Seattle would offer along the Rocky Mountaineer route. 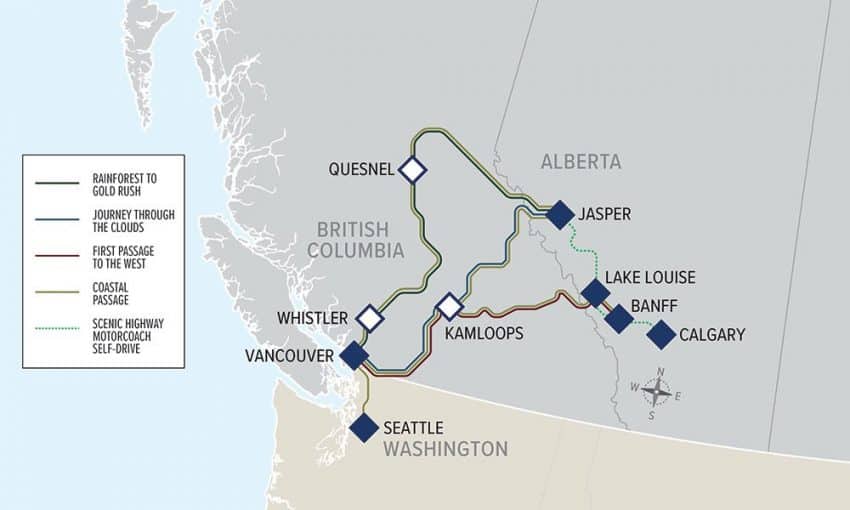 The Chateau Lake Louise hotel, where I stopped next, was perhaps my favorite Fairmont. The historic property was built in 1911 to serve guests along the transcontinental line of the Canadian Pacific Railway.

My suite held high views of Lake Louise, which still lay below a cover of ice and spring snow. An in-house nature guide escorted my friends and me on a magical winter walk. In the evening, we dined at the Walliser Stube restaurant and wine bar, known for its authentic Swiss fondue.

From Lake Louise, we traveled the short distance to Banff where we stayed at another historic Fairmont property. Designed to resemble an enormous castle, the Banff Springs Fairmont is one of the largest and most impressive of all the Canadian rail hotels.

Constructed in 1888 in an ornate Scottish Baronial style, it stands amid the splendors of Banff National Park. There I enjoyed a luxury stay in a two-story suite inside one of the castle’s turrets before finally departing at dawn for my unforgettable Rocky Mountaineer adventure.

As my friends and I boarded the 21-coach Rocky Mountaineer, we noted that we were among the youngest travelers, but we soon found that on board were well-traveled interesting international guests with good stories and a great sense of humor.

Service on the Rocky Mountaineer is exceptional, and so is the cuisine. The first day began with coffee, mimosas, and hot scones. At lunch in the dining area, we enjoyed the first-class cuisine from executive chef Frederic Couton, who was kind enough us to have a peek at his gleaming galley kitchen.

Our chosen route took us from Banff, with an overnight stay in a modest motel in Kamloops (a town of 85,000) and on to Vancouver for two nights before we headed to Seattle, our final destination. En route we passed a valley where the rushing Adams River is full of sockeye salmon during spawning season—a good spot for bear sightings.

Along the way, we saw bighorn sheep, mountain goats and elk and bald eagles. Hours passed quickly as we watched spring return to the Rockies and waterfalls rush down the stone faces of ancient cliffs.

By the time we reached Vancouver, our happy band of rail riders had become a close-knit group, so I invited two new British friends to see the view of the Vancouver harbor from my impressive ultra-modern Fairmont Pacific Rim hotel suite.

There we dined on sushi and an array of fresh ceviche dishes from their internationally-acclaimed chef, Darren Brown.

After exploring Vancouver, we boarded the Rocky Mountaineer one last time for our final all-too-short leg of the trip—the recently added ultra-scenic route from Vancouver to Seattle edging the Pacific Northwest coastline.

In Seattle, not far from Pikes Market, we stayed in another fine Fairmont property, the historic Olympic Hotel, where we ended our great rail adventure with the last supper in the elegant Georgian Room with its Palladian windows and sparkling chandeliers.

There is nothing quite as restful as travel by train, gliding silently through Elysian lands untouched by the modern world. As the Rocky Mountaineer traced the northern passages of native peoples and early explorers, I was struck with a sense of wonder and gratefulness—and an overwhelming desire to one day ride this way again.

All aboard! For more information on the Rocky Mountaineer Railway, visit www.rockymountaineer.com. This trip was sponsored by the railway, but the opinions are the author’s own.