France: Strasbourg Then and Now

That’s how long it took me to work up the courage to return to Strasbourg, France, where my study-abroad-year-gone-wrong had left me with an academic mess to clean up, a handful of my worst memories, and a whole lot of disappointment.

It’s funny and wonderful, and sometimes tragic, how a city can take on a personality – a disposition – all its own.

For me, from 2008 onward, Strasbourg was a contrarian opponent at the best of times, and a contemptuous villain at the worst.

In my naïve and short-sighted determination to study independently in the French university system, I found myself unprepared for everything that implied: the disorganized course registration; the perpetually (deliberately?) unavailable administration; the nonexistent communication structure; and the shrug of the shoulders when anything (or everything) went wrong.

If there was an orientation for inbound students, I never heard about it. If a personal call came to a department head during office hours, the door was literally closed in my face.

But the one thing that echoes back through time – the monster that hangs out in the closets of my mind, smoking and chomping on baguettes – is la grève. Strike.

In Protest of Protests

Strike is the French answer to almost any question. Education strikes in l’Hexagone are like the flu epidemic: you can count on them every year. In the transportation sector, strikes occur with alarming regularity, affecting local, national, and even international travel.

Instead of following attempted negotiations, French strikes usually precede them.

La grève represents a ubiquitous power struggle between boss and employee, government, and citizen – a game of tug-of-war that nearly everybody loses. Even – especially – the spectators.

The 2009 strike at the University of Strasbourg didn’t mean that my second-semester classes were canceled until further notice. That would have been, I think, much simpler.

No,  the strike was like an ongoing event faculty could choose to participate in – meaning that some of my professors had opted to continue teaching, and others had not, and I never knew which until I reached the classroom.

Some of them changed their mind after a few weeks and then changed it back again. All of them expected to communicate with students via telepathy.

To sum up four months of my life in a single paragraph, I spent a lot of time running back and forth between my dorm room and campus, like a really stupid breed of dog playing fetch with my classes.

To further complicate matters, student strikers literally barricaded all entrances to most of the major campus buildings at irregular intervals so that no one had any choice about participating in the strike.

Tables, chairs, desks, and the petitions littering them physically barred me from getting a French education.

You would think that the barrage of emails to my professors would not go unanswered, given the level of anxiety I demonstrated in my frantic questions about the strike, class schedules, the lingering uncertainty over final exams, whether or not I’d receive credit for the semester, and so on.

This was not the case. I received few responses with even fewer answers. The one thing everybody seemed to agree on was that the strike could end at any time – so I had better stick around. I couldn’t travel. I couldn’t get a job.

And while it might sound like a lot of fun to study abroad, minus the studying part, you’d be surprised by how quickly you start to miss a real education – the old-fashioned kind, with teachers and classmates and a lesson plan.

You know, all the things I was paying tuition for. Apparently, the University of Strasbourg was in no way accountable for holding up its end of the bargain.

Thanks for the Memories

It’s just not possible to be victimized by a whole country, an entire city, or even a small university campus – but that’s how it felt. No one even pretended to care that this was my one chance to study overseas and broaden my horizons, and all that marketing pamphlet bullshit.

I thought a year in France meant great food and beautiful language with the occasional cultural speed bump that I could surmount with a certain amount of dignity and enthusiasm intact. Instead, it meant one of the longest student strikes in anyone’s recollection, a constant overload of stress and frustration, and the slow but diligent prying of my fingers from the grip of sanity, with only sporadic bouts of excellent cuisine.

When summer arrived – my second semester having consisted of exactly three weeks of class and a handful of (necessarily short) final exams – I got tonsillitis. Not Strasbourg’s fault, probably, but still. Finally, soundly defeated by a far superior adversary, I went home.

As Her Majesty Irony would have it, during my catastrophic time in Strasbourg I also met the man who would go on to become, in a matter of years, my husband.

While he is not (thankfully) a Strasbourg native, we promised our friends in Alsace that we would make a triumphant return to the Grande Ile where we fell in love for a mini-wedding celebration and reunion. And so, three years after I’d last set foot on the Campus of Misfortune, in the City of Dashed Hopes, I was back.

It was exactly the same – almost. The tram was going new places, and the commercial center at Rivetoile had expanded considerably – oh, and St. Paul’s Church had finally emerged from beneath its scaffolding–but everything else was just as it had been a few hurried years earlier.

And since 1,000 days seemed like enough time to plunge back into its depths with a little objectivity, I was curious to see what Strasbourg’s second impression would be like.

Like many tourists arriving in Strasbourg for the first time, the size of the city struck me first.

After a few years living abroad (again) in London, twenty minutes seemed like the minimum amount of time anyone ever spent on foot. But in twenty minutes, you could cross Strasbourg’s entire city center.

And you should, if you decide to go.

The winding streets are largely pedestrian, and some of the most scenic parts of the Alsatian capital can be found along its many canals.

If walking isn’t exciting enough, or you take a firm stance against cobblestone, you can opt to ride in a bateau-Mouche tour boat while the city’s fascinating history is recounted monotonously at you via audio-guide.

Linger afterward in front of Strasbourg Cathedral, the single-tower structure Victor Hugo called “a gigantic and delicate marvel,” and see if you can spot the devil riding along the legendary wind surrounding it.

I never did, but then I was usually busy chasing my classes around the university campus. The Place de la Cathédrale, like much of the city, is filled with German-style Christmas Markets throughout the month of December.

Would you have guessed that the district once known for its tanning houses and slaughterhouses, and then for its hospital for syphilitics, is now one of the most beautiful areas of the city?

Speaking of food, eat your way to happiness one evening at Académie de la Bière, a popular local eatery tucked away on the west side. Their excellent selection of beer is barely noteworthy once you’ve moved on to the food menu: in the starring role is tarte flambée (also known as flàmmeküeche), an Alsatian specialty of thin bread dough topped with crème fraîche, onions, and lardons (essentially bacon bits).

For alternative – and more sophisticated – Alsatian fare, check out Caveau Gurtlerhoft, located in a homey cellar across from Strasbourg Cathedral.

As for final food notes, the regional cheese of Alsace is the strong and creamy Munster –so find a way to work that in whenever possible. Pro tip: try it on a tarte flambée.

Shoppers and art enthusiasts won’t be let down by Strasbourg’s Place Kléber (and surrounding streets) and its Musée des Beaux-arts, respectively.

I will take it personally if anyone dares to return from Strasbourg without showing an interest in Tomi Ungerer, a Strasbourg writer and illustrator with his own museum not far from the Place de la République. (When I met him back in 2008, I professed my immortal love for him, leaving him very, very confused.)

Those of a more political bent will enjoy a tram trip to see the seats of the EU, European Parliament, and Council of Europe northeast of the city center. Just across the road, the Parc de l’Orangerie offers pretty, peaceful promenades and one of those small, weird zoos the French are so fond of.

In 2010, Strasbourg took its bike-friendly attitude one step –one pedal? – further with a shared bike service called Vélhop. You’ll have plenty of choice for routes since there are over 300 miles of bike paths within Strasbourg’s limits.

But as long as you’re up for an adventure, make it an unforgettable one: ride your bike to Germany.

It’s easier than it sounds. Pick up a map and follow the bike paths southeast out of the city center, then cross the Bassin Vauban waterway. A few twists and turns later, you’ll reach the Jardin des Deux Rives – the “Garden of Two Riverbanks.”

A footbridge of immense, and immensely elegant, dimensions joins Strasbourg with the city of Kehl, Germany. It’s open to both pedestrians and cyclists, with a platform at the top and center allowing for excellent views of the Rhine and the park below.

But don’t stop there. The best part, for me, was completing the journey – biking across a country border for the first time – and stopping in a Kehl café to order my coffee in German before turning around and cycling back.

And, for the first time, returning to Strasbourg didn’t seem quite so daunting.

Since cities, like people, have personalities of their own, and bad days, and sometimes down-right atrocious manners due to poor upbringing, I’ve found it’s best not to write one-off over a negative experience.

Instead, I recover, return, and replace: give myself the chance to restore a little faith, return when ready, and set out to replace bad memories with good ones.

Everyone, and everywhere, deserves a second chance. They might not change, but you will –and for me and Strasbourg, friendship was just a matter of time. 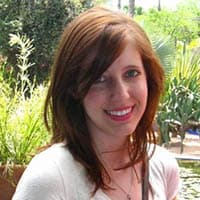 Jamie Leigh is an obsessive traveler, an avid reader, and a freelance writer based in New York City. Her other hobbies include blogging, Netflix, and cheese.