Wish You Were Here in Havana

I leaned gently against the wall that runs along the Malecon in Havana, the Gulf of Mexico glistening in the moonlight behind me.

Weathered yellow taxis and colorful 1950s Chevys raced by on the high-speed roadway in front of me. The bustling turquoise and white Riviera Hotel stood tall on the far side.

I looked before me at a band of street musicians who made their living every night doing exactly this. They were an extremely animated bunch lit up by the glowing moon in a spotless Caribbean night sky.

Directly in front of me was the leader of the group, who was also the lead guitarist and the youngest of them all. He had eager eyes, an energetic grin, and proud confidence in what he was doing. He was a skinny, fast-talking, clean-cut young man with dark features.

Play it for our American Friend

He reached forward, shook my hand, and smiled. “We play this one for you, my American friend.” He glanced around at his five supporting members who formed a scattered semi-circle directly behind him. To his far-right another guitarist, a plump older man with a light brown fedora, a red short-sleeve button-down shirt, and brown pants.

To this man’s left stood a straight-backed fellow with a small head and a huge grin, with a set of bongos hanging from his neck. Next to him stood a short, fat shaggy-haired man with a set of mariachis and a sharp toothpick protruding from between his teeth.

He had a lit cigar, a Romeo and Julieta I believe is what he told me, dangling from his mouth.

The thick smoke clouding his face didn’t seem to faze him whatsoever. Finally, to his left but a step behind stood a tall, skinny, dark-skinned young man in a dirty white baseball cap.

He held two empty water bottles filled with small rocks, a homemade version of mariachis, quite possibly an impromptu addition to the group. Quite a cast of characters I thought to myself.

You would most likely not see the six of these gentlemen together anywhere, except of course in a band, their lives brought together by their musical talents. The young leader nodded his head towards me and I prepared myself for some traditional, authentic local music.

Then he began to pluck his guitar strings. I immediately smiled, surprised with his selection but recognizing the song on the third note. I leaned back firmly against the wall with my arms crossed, took a deep breath and relaxed.

The warm tropical breeze blew onshore behind me, and through the sound of the guitar I could vaguely hear the waves crashing gently against the rocks below.

I became entranced by the sound of the guitar, each pluck of the string energizing and moving me. I looked around and felt as one with this group, their city, their culture, and their music, their twelve eyes fixated on their one-man audience. At that moment I felt more present than I had ever felt before in my life.

After the guitar solo opened up the song, the rest of the band members snuck in to catch up to the lead, one at a time, until the vocals began in smooth, broken English…

As this young Cuban sang before me, and the instruments backed him up in perfect rhythm, my mind raced through thoughts of what I knew about Cuba’s storied history.

Although Roger Waters had his own inspiration for writing these lyrics in 1975, I couldn’t help but draw comparisons between The United States and Cuba through these very words. Here were two vastly different societies at war politically with each other for over 50 years.

To be impeccably clear (and I was reminded daily by the Cuban people), this is not a war between the people of these nations but rather a war between the governments. It’s a deep history of confrontation, sabotage and mistrust, a struggle between ideologies and beliefs that had persisted since Castro’s Revolution in 1959.

Some might say, Green fields of Democracy vs. the cold steel rails of Communism. Regardless of the political, economic and social differences between the United States and Cuba, at this moment this charismatic young guitarist and I were standing on the same ground, with the exact same mindset, and the exact same questions and doubts about what the future held for us both, and our countries.

Maybe after all our personal differences and experiences living in conflicting societies were put aside, the deepest connection we shared was written right there in those very lyrics… “We’re just two lost souls swimming in a fishbowl, year after year, running over the same old ground. What have we found? The same old fears.”

Love Cuba? Get our Cuba Plane Reader for dozens of stories about places to go and things to see in Cuba on your Kindle, only $2.99 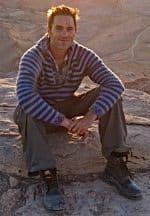 Alex Hill is a freelance writer living in San Francisco who traveled to Cuba recently. Alex was born in London, grew up in Baltimore, and now resides in California. After working for over ten years in the financial services industry, Alex quit his corporate job last year and spent time pursuing personal interests and traveling throughout South America for over half the year.