The World’s Most Unruly Places: Sealand 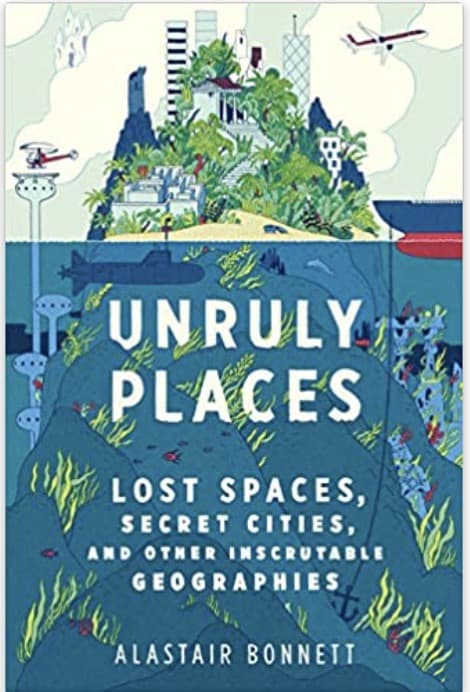 “Our relationship to place is riddled with paradoxes. Ordinary places are also extraordinary places; the exotic

can be around the corner or right under our feet…These unruly places provoke us and force us to think about the neglected but fundamental role of place in our lives.”

Alastair Bonnett is a professor of social geography at Newcastle University, author of numerous academic texts, and former editor of the psychogeographical magazine Transgressions: A Journal of Urban Exploration. In his book Unruly Places , he delves even further into lands that geography has seemingly forgotten. In each chapter, he pinpoints the elusive, the intriguing, and the odd with coordinates on a map. Floating islands, underground cities, nonexistent nations, and much more are finally explored in Unruly Places.

This chapter of Bonnett’s book discussed the breakaway nation of Sealand. Founded in 1967 by a retired British army major, Sealand became a tiny, sovereign nation filled with controversy. The nation’s 50-year lifespan was filled with all the conflicts, victories, and stories of a real independent nation. Now just a memory, Sealand’s legacy lives on and is a model for future sea-bound micronations.

Prince Michael rides his boat with Sealand in the background. Photos from www.sealandgov.org

The Principality of Sealand

Wouldn’t it be fun to have your own island nation with your own laws? No matter how small, on an island your independence is tangible.

Your borders are real and beyond doubt. With a bit of luck, your kingdom will be unclaimed and there waiting for you, requiring you only to hop onshore, unfurl your flag, and claim sovereignty. Just like Sealand.

The Principality of Sealand is an “independent state” that was established in 1967 by a retired British army major, “Paddy” Roy Bates, on an abandoned World War II gun platform. It is located on Rough Sands, off Essex coast, and has an inhabitable area of 550 square meters.

The platform was built in international waters and abandoned after the war, so when, on September 2, 1967, Bates and his family hauled themselves up the side of the old sea fort, they felt entitled to claim sovereignty. Bates bestowed upon himself and his wife the titles of Prince and Princess, and “the royal family” set about turning Sealand into both a home and a kingdom.

Sealand is the best example of a sub-breed of the world’s numerous self-started nations, or micro-nations, called platform states. These maritime nations are often short-lived. Ernest Hemingway’s brother, Leicester Hemingway, was briefly president of the bamboo-platform republic of New Atlantis, off the west coast of Jamaica, anchored down by a railway axle and a Ford engine block.

When this structure was destroyed in a hurricane in 1964, Hemingway created another such fiefdom, Tierra del Mar, an 840-square-meter platform built on a sandbar near the Bahamas.

However, The US State Department persuaded him not to declare sovereignty; it was worried that Tierra del Mar could serve as a springboard for the annexation of nearby islands by unfriendly powers.

Compared to such fragile endeavors, Sealand has a long and rich history. In 1968 the Royal Navy sent two gunboats to evict the Bates family.

Roy Bates fired warning shots at them and was arrested. However, he managed to argue in court that British law did not apply to Sealand.

In its judgment of November 25, 1968, the court declared that Sealand was outside of British national territory and hence jurisdiction.

Flush with success, the Sealanders began to issue gold and silver coins, the Sealand dollar, and the postage stamps. The sale of these collectors’ curiosities helped to finance the new kingdom. Passports were also issued, but whether these too were offered for sale is disputed.

Ten dollars worth of official Sealand currency. The next dramatic event in Sealand history came in 1978 when a group of Dutch and German businessmen visited with a commercial proposition.

While they were there, they took the fortress at gunpoint, holding Roy Bates’s son and heir, Prince Michael, a prisoner for three days. He was freed only after his father organized a counterattack.

The Sealand News, the island’s online newspaper, reported Bates as saying, “We phoned a friend who owned a helicopter.” The story went on: “He’d performed stunts in James Bond films, but this was the first time he’d done it for real. ‘I descended from the helicopter to the platform with a gun, fired a shot and said: “Everyone put their hands up!” and that was that.’”

There was plenty of gunfire but no injuries, and in true Bond style, the invaders were swiftly overpowered and taken as “prisoners of war”.

When the German government asked Britain to intervene, it was told the fortress was beyond British jurisdiction. The prisoners were later released, after the arrival of a German diplomat.

The first to be freed, though, was the Dutch citizens. The one German citizen was held a little longer because it was reasoned, he had accepted a Sealand passport and therefore was guilty of treason.

Those were Sealand’s glory days. But most games, however serious, lose their excitement in the end, and the players drift off. Despite its military triumph, in the 1980s Sealand began to sink into disrepair and disuse.

Its independence was also called into question when in 1987, the UK extended its territorial waters from three to twelve miles. Sealand retaliated with its own twelve-mile claim, declaring the annexation of Harwich and Felixstowe on the English coast.

Britain made no attempt to take Sealand, and the British government still treats it as a de facto independent state. Prince Roy paid no British National Insurance during his time as a resident of Sealand. Moreover, the obvious infringements of UK law on Sealand continued to go unpunished.

For example, when Roy Bates fired “warning shots” at a ship that he felt was straying too near his kingdom in 1990, the ship’s crew’s complaints were not pursued. In its official history of the new state, the Bates clan claims that this was a “clear indication that Britain’s Home Office still considers Sealand to be outside their zone of control.”

Unfortunately, the buccaneering image of Sealand drifted into murkier waters in the 1990s. In 1997, after the killer of fashion designer Gianni Versace committed suicide on a Miami houseboat, the police discovered that the man who owned the houseboat had a Sealand passport. In the spring of 2000, Spanish police arrested a Madrid-based gang tied to international drug trafficking, money laundering, and selling forged documents. Found among its cache were thousands of Sealand passports.

Questioned by Interpol, Roy Bates was adamant that the passports were not for sale. “Sealand has all been a game, an adventure, and it is very unfortunate to see it take this turn,” he told one reporter. The source of these forgeries was later traced to the same German man who had tried to take Sealand by force nearly twenty years earlier.

Dubbing himself Sealand’s Minister of Finance, he had created a fake Sealand Business Foundation and boasted that he had sold more than 150,000 fake Sealand passports. The Sealand national website claimed that “many of the forged passports were sold to people leaving Hong Kong at the time of Chinese reoccupation, for USD 1,000 each.”

The lease of Sealand to an internet company, HavenCo, in 1999, compounded its tarnished image, Silicon Valley investors pumped in hundreds of thousands of dollars in seed money to turn Sealand into an off-limits Internet server and “fat-pipe data haven.”

Child pornography, spamming, and malicious hacking was prohibited, but with no restrictions on the copyright or intellectual property for data hosted on it desalinization plant and new generators were installed, satellite connections were established, microwave links to Britain were rigged up, and miles of cables were laid.

With the help of the extra cash, Prince Michael also established a Sealand army and navy, with machine guns and high-speed dinghies. Despite all this, HavenCo’s customers soon began to thin out. What seems to have scared away most of them was the fact that all of Sealand’s Internet traffic went through Britain, which claimed that the platform was within its territorial waters.

In 2008 HavenCo went bust, and the media was fed a story by Michael Bates that Sealand was up for sale, valued at 750 million euros. This appears to have been a ploy to drum up interest in a new leasing arrangement. With no new funds, Sealand became, in the late 2000s, once again uninhabited, and Prince Michael lives out his days in Leigh-on-Sea. This is also where his father spent his last days. Roy Bates died on October 9, 2012, at the age of ninety-one.

Talking to the Sealand News, Joan Bates offered a romantic view of life on Sealand: “It’s been a fairytale. What greater compliment can a man pay a woman than to make her Princess of her own Principality?

I love being able to call myself Princess. When we travel abroad on our Sealand passports we are always greeted with a lot of fuss and treated like royalty.”

It’s a fantasy that is immediately comprehensible. For those of us who are bored and frustrated by the endless rules and impersonal bureaucracies of conventional nations, the idea of creating one’s own island kingdom has tremendous appeal. Indeed, the most telling recent stories about Sealand concern the way it has been taken up as an icon by a new generation of eco-libertarian planners.

The Seasteading Institute, founded in 2008 in California, looks to Sealand as a pioneer. The aim of the institute is plainly stated as “creating sustainable sea platforms where people can choose to live is they’re unsatisfied with life on solid ground.”

Man-made sea kingdoms have a growing appeal, and something of that appeal is being captured in new islands built in the Maldives and Dubai, as well as in a new generation of cruise ships that are morphing into permanent sea-roving settlements. But the root of Sealand’s appeal takes us into terrain that these ventures still only hint at. It is the territory of independence, of sovereignty, of really having one’s own place. It may be a foolish fantasy, but it’s an important and very human one.