Steeped in Beer in Chodova Plana: These tubs are not for water

We’re sitting on the train, traveling from Prague to Chodova Plana.

The train ride is about three hours; Nataliya and I are chatting and enjoying the scenery outside the window as the Soviet-era train chugs heavily along the old railroad tracks. We are on our way to soak ourselves in beer. Literally.

But first, we feel we must prepare ourselves for such a decadent day. We get off for a short visit to Marianske Lazne, or Marienbad, the region of the Czech Republic known since the 16th century for the healing properties of its natural spring waters. We have a drink of the natural spring water and feel fortified for the day ahead.

We arrive in Chodova Plana by late morning. We can see when we get off the train by the unpopulated station that this is a little village, and not used to foreigners arriving by train. We begin walking and eventually ask a man gardening in his front yard for directions.

The place we are going to—Chodovar—is almost the same as the city’s name—Chodova—so that makes it hard for us to get through. He looks conf

used, not sure what we’re looking for.

“Pivo? Beer? Ahh …” and he points us in the right direction.

Chodova Plana is a quaint little village out in the forest in a region surrounded by hot springs. It takes us about 15 minutes to make it through the country roads, spotting what look like summer homes along the way, to our destination: Chodovar—a historic brewery dating back to the 14th century.

Today, Chodovar not only continues its longstanding tradition of brewing beer, it also bottles and distributes the beer, operates a restaurant in the caverns of their brewery, and—the reason we’ve come—run a beer spa.

The receptionist has been expecting us; we had a reservation to be here today, made while we were still in the United States. To prepare us for the crown of their spa experience, she escorts us into the caverns where we are introduced to the massage therapists.

We each receive a deep tissue massage in the cool setting of this cave.


Then, we are escorted to the bathing hall. We walk through the arched cave tunnels until we come to a heavy, wooden door with the face of a long-haired man in its center. We walkthrough.

Here, steel bathtubs are lined up along the stone walls, some of them with curtains pulled for privacy. We are escorted to side-by-side, full-size bathtubs. A woman in a white uniform begins to concoct our baths.

The experts at Chodovar tout the healing qualities and good health of soaking in their beer. The mixture of dark beer, mineral water, yeast, and seven curative herbs warmed to just the right temperature (34 degrees celsius) is, as they put it, “harmonizing functions of the organism, mental rest, recondition and relaxation.”

“You mean it’s good for you?” Nataliya asks. 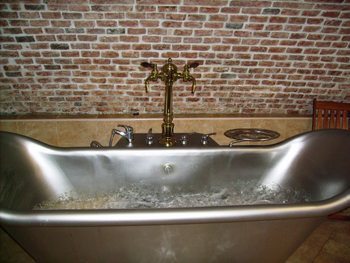 The woman, running our baths and adding herbs and spices, continues on the script. I don’t think she really knows English; she’s like an English-second-language pop star who knows how to sing the words but doesn’t know what they mean.

The only thing I detect as I slip into the hot tub of beer is that it feels and smells good. There is a foam atop the tub, just like in a properly poured mug or glass of beer. I can feel the carbonated bubbles rising across my skin to the surface and popping in little bursts.

As we soak in the beer, we are served cold beer on stools next to our tubs. When I finish my beer, I’m tempted to dip my glass in my tub for a refill. But the server brings us refills before we can ask, or before I can sample my bath beer.

As has been explained to us from the start, this is supposed to have an array of health benefits. It’s good for the heart and for circulation. Good for the immune system and skin. It’s even good for cuticles and digestion, although that probably accounts for the light beer being served at the bath-side table. But all I know for sure is that it is relaxing and enjoyable—and that is the health benefit in its own right.

After soaking in the warm beer for about half an hour, we are provided with robes and escorted to the next part of the beer therapy. We enter a dimly lit room that looks like a mine. The only light comes from salt-rock lamps.

In this room, we are tightly wrapped in beer-soaked cloth and left like mummies on beds. Soft music plays, and there is the light, lingering scent of beer. There are beers on our bedside tables, but we cannot reach them now; we are mummies.

“You now will rest 20 minutes,” our beer spa expert explains. “Beer will penetrate our pores and skin.”

“Yes, of course,” she continues. “The physical and mental rest enables the relaxed body and mind to release a stream of positive thoughts and energy.”

I’m not sure what I expect to happen—probably nothing—but I fall into a twilight sleep as we rest, not quite awake but not completely asleep, breathing in beer, feeling the warm beer all over my body, eyes closed and warm salt light coming through my lids, creating a kaleidoscope or red and blue, purple and green movements in the space between my eyes and lids. I’m relaxed, almost as though in a trance.

After another twenty minutes pass, she returns to unwrap us.

“And now we shower?” Nataliya asks.

“Oh, no!” she pleads. “We recommend that you don’t take a shower until tomorrow. You should leave the healing properties of beer in your skin. Would you like another beer?”

“How do you feel,” she asks us as we walk out of the resting room, beers in hand.

“Good,” Nataliya says with a sigh.

I smile. “I think the physical and mental rest enabled my relaxed body to release a stream of positive thoughts and energy,” I say.

We finished our beer in the beautiful gardens in the spa’s courtyard, lounging in chairs and deeply breathing the outside air.

.Before leaving, we venture back inside and had a light snack—and beer—in the cavern restaurant. They have a hotel on-site too, and we wish we’d planned on making a night of it.

But we have a train ticket back to Prague today and a hotel waiting for us in the city of a thousand spires. We purchase a case of Chodovar beer and leave the spa feeling renewed and refreshed.

And, we realize as we ride the train alongside other passengers, smelling as though we’d soaked ourselves in beer.

As though we haven’t had our fill of beer on this day, we make one more stop on our way back to Prague. About an hour outside the city is Plzen—the birthplace of beer as we know it. The world’s most popular pilsner, Pilsner Urquell, is brewed here. Unfortunately, it’s too late to catch the last tour of the brewery, so we settle for a single pilsner in an outdoor café.

“You smell like beer,” the waiter said, two Pilsner Urquell’s and tall pilsner glasses on his tray.

“So do you,” I said as he placed the bottles before us and began to pour.

It’s an interesting sensation now, a few hours after leaving the beer spa. We don’t feel sticky or dirty, but there is a sort of residue or second skin on us that we can feel and smell. Almost like the feeling after you’ve sweat and dried again, when you’re dry but the salty surface remains.

Back on the train, feeling relaxed still, I wonder if some of the fellow passengers take us to be drunks. We’re more relaxed than tipsy, the light beers having passed through us and having been consumed over the course of a long day. But we smell as though we’ve been drenched in beer. Because we have been.

All in all, we enjoyed our visit to the Chodovar beer spa in Chodova Plana. It was a unique and exhilarating experience. Whether you prefer beers or spas, I recommend it. 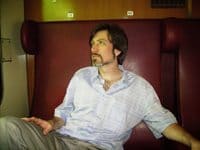 Eric D. Goodman is a full-time writer and editor who loves to travel. His novel in stories, Tracks, was published by Atticus Books (Summer 2011) and won the 2012 Gold Medal for Best Fiction in the Mid-Atlantic Region from the Independent Publishers Book Awards. He’s also the author of the children’s’ book, Flightless Goose. Eric’s work has appeared in The Baltimore Review, Pedestal Magazine, Writers Weekly, The Potomac, among others. Visit Eric on Facebook, Twitter, and at his literary blog, Writeful. Learn more about Eric and his writing at www.EricDGoodman.com.