Volcanoes of the World, Country by Country 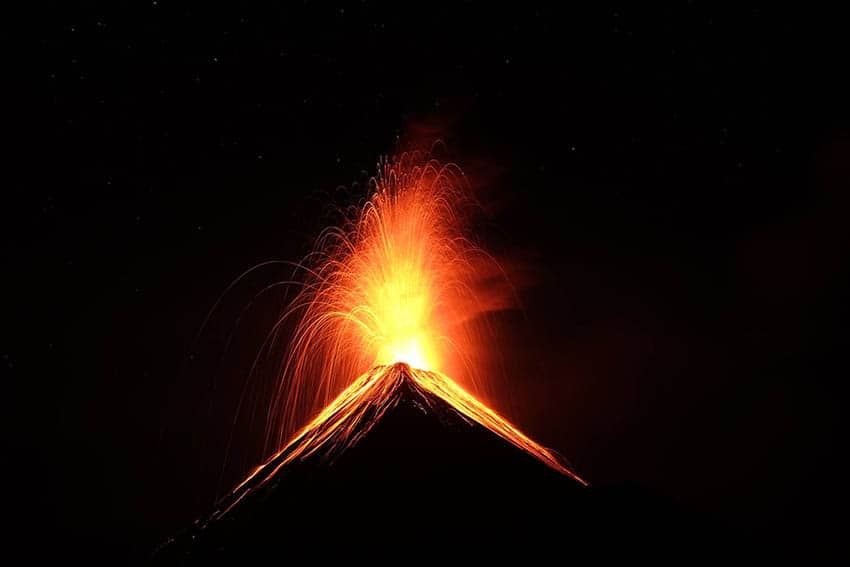 One of the most trusted travel magazines, Condé Nast Traveler, brings together some of the best journeys featured in their publication, in The Conde Nast Traveler Book of Unforgettable Journeys: Great Writers on Great Places

. A collection of stories coupled with practical advice and travel tips, this book will inspire your next vacation. Visit the treasures of the world with helpful knowledge from preeminent writers in your hand.

One such writer, Simon Winchester, gives the information he has gathered on the best volcanoes to visit around the world from his own experiences. Traveling to the Philippines, Indonesia, Japan, Russia, or Hawaii? – Winchester has been there and wants you to experience the wondrous awe of seeing a volcano up close as he has. Read about the best way to trek to the peak, and find out valuable safety tips in the Book of Unforgettable Journeys.

Simon Winchester was born in 1944 in London, England. He traveled a lot in his lifetime and was always fascinated in the movement of the ever-changing Earth. Naturally, he studies geology at Oxford. After graduating with a degree in 1966 he took jobs around the world in his field of expertise. He has written a handful of books on Earth’s geology and through his studies became an avid traveler and published books on his trips.

Excerpt from The Condé Nast Traveler: Book of Unforgettable Journeys

What you need to know about volcanoes: plus, where and how to see the world’s most active

Locals recognize the idiosyncrasies of active volcanoes: If they tell of hearing or feeling ominous grumbles, get well clear. The magnificence of these slumbering monsters is matched only by their dangerous sense of caprice.

If you are on a mountainside when a volcano erupts, beware of the active lava flow. In Hawaii and at Etna, the flows will be fiery; in places like the Philippines, however, they may be black and slag like on the surface but molten a few inches below- and stepping onto what looks like a solid crust could plunge you into red-hot lava.

If an eruption produces the scalding rock-filled winds known as pyroclastic flows, stay at least sixty miles from the volcano’s cones. Pyroclastic flows move fast and kill either by the blast or by heat.

If there is any local indication that a volcanic dome is changing shape, keep your distance: The handful of tourists who die each year in volcano accidents around the world do so after straying onto exploding domes.

If, as on Mount Pinatubo, there are water-and-ash streams or lahars, run like hell. These have a nasty habit of increasing in volume and speed.

Poisonous and suffocating gases may produce close to a crater or from the tiny piped exits known as fumaroles. The poisonous gases – hydrogen sulfide and sulfur dioxide – usually smell distinctively foul, and you’ll want to move away (always make sure you have an escape route).

Carbon dioxide is odorless, however, and heavy enough to remain in a pocket – and can choke you to death in minutes. If you see dead animals or bones in a crater, you could go the same way if you take the same path. If rock and lapilli bombardments start up, immediately find a cave to shelter you until the eruption subsides.

And take care in an obviously geothermal area where there are mud pools and geysers. Crusts that are formed here can look deceptively solid (and alluringly pretty): Plunging through a crust and ending up neck-deep in boiling mud can really take the shine off your vacation.

Following is a rundown of the Volcanoes most worth a visit in the Philippines, Indonesia, Japan, Russia, and the Hawaiian Islands.

There are twenty-two active volcanoes in the Philippines. The most easily accessible is Mount Mayon and the notorious Pinatubo, both in the southern part of the principal island of Luzon.

The closest town to Mayon is the port city of Legaspi, which is well served from Manila by air and bus. Mountain guides, though not always reliable, are available. Start your climb before dawn to ensure that you’ll make it up and back in a day.

Indonesia has 173 active volcanoes, most on the suture line where Eurasian and Australian plates collide along Java, Sumatra, and Bali.

The most famous is Krakatoa, now called Anak Krakatau (“Child of Krakatoa”), where on August 26, 1883, what was likely the greatest eruption in recorded history took place – its death roar, reckoned the loudest ever, was heard from Ceylon to Australia. The island lies between Java and Sumatra and is accessible only by boat.

The twin peaks of Merapi and Merabu, near the southern Javanese city of Yogyakarta, attract visitors because of the lovely sunrise between them each day. Both are active – the eruption of Merapi in 1006, it is said, prompted the Hindu raja of Java to flee eastward and bring Hinduism to Bali.

Bali’s sacred Mount Agung, ten thousand feet high, last erupted in 1963, killing almost two thousand. The climb starts in the village of Besakih. Stay at one of the many small hotels around Lake Batur.

Japan claims 108 volcanoes, of which the best known is Mount Fuji. Its last eruption was in 1707, and it can fairly be expected to remain quiet – a good thing since hundreds of thousands of people get to the top every year. The trails are open July and August.

Mount Usu, on the northern island of Hokkaido, has spawned sinister-looking upstart mountains in recent year, including the thirteen-hundred-foot Showa Shinzan, which rose out of a wheat field in 1943 after a series of earthquakes.

There is a cable car up Usu itself, but exploring the neighboring peaks is a good way to remind yourself of the bizarre power of vulcanicity. Stay at any of the hotels around pretty Lake Toya.

Sakurajima lies in Kagoshima Bay, off the southern island of Kyushu, and erupts more or less constantly. Its three peaks can be reached from several places on the road around its base. Tiny oranges grown in groves at the foot of Sakurajima sell for a small fortune on Tokyo markets.

With Kamchatka, the dangling peninsula off far eastern Russia, now getting easier to reach by air and sea, its twenty-nine huge active volcanoes are becoming increasingly accessible.

The most famous is the Bezymianny peak, which can be reached by charter helicopter (quite expensive) from the regional capital, Petropavlovsk-Kamchatsky – the headquarters of Russia’s Pacific atomic submarine fleet.

After 70 million years of volcanic activity, Hawaii still has five active volcanoes, including two of the world’s most active. The 13,680 foot-tall Mauna Loa, the world’s largest active volcano, last erupted in 1984, and Kilauea, where the mythic volcano goddess Pele made her eternal home, has been erupting continuously since 1983.

Located thirty minutes southwest of Hilo on Hawaii’s Big Island, these volcanoes compose part of Hawaii’s three-hundred-thousand-plus-acre Volcanoes National Park (nps.gov/havo). Adventurous backpackers can hike up for the night in the Pu’u ‘Ula’ula cabin at 10,035 feet, or in the Mauna Loa cabin at 13,250 feet.

Visitors preferring a two-hour trek can traverse verdant rainforest and a mile-wide crater on the Kilauea Iki trail. Those who left their hiking boots at home can loop around the Kilauea caldera by car on the scenic Crater Tim Drive.

Hannah Monahan is a former editorial assistant at GoNOMAD. She lives in Boston, Mass.