Kabini and Bhadra, India: Life Unfolds by the Riverside

Kabini and Bhadra are alive with energy

A fury of colors hits the eye as the jungle unfolds itself into a collage of greens, yellows and browns. I squint through the trees and wonder, like Macbeth, if the woods are moving.

Driving through the serpentine tracks lined by teakwood, it feels like I am rallying down a dirt track. The journey, however, abruptly ends near a small murky pool, surrounded by dense undergrowth.

I wait in the open jeep, with a bunch of motley tourists, lost in the forests of Karnataka, located deep down in the southern part of India. Sleepy and tired after a five-hour drive from the urban sprawl of Bangalore, we are in the midst of a safari inside a national park.

The forest is called Nagarhole in the local language, referring to the many streams that snake through this jungle. As a country, we have a penchant for naming our streets, buildings and even memorials after our leaders. The forests are no exception. Nagarhole therefore became Rajiv Gandhi National Park in the guide books, named after our former Prime Minister.

The sun turns golden, creating patterns on the waters. Nudged  by the breeze, the branches of the trees stoop down to caress them, teasing them as the ripples form. We stop, wait and hope that a wild beast will soon cross our path.

Our naturalist whispers, “This is the tiger’s pool; usually they come here at this hour to drink some water.” Leopards, he adds, avoid a clash with the tigers by arriving a few minutes early. But neither of the wild cats are probably thirsty enough to appear.

The silence is all pervading, except for the sounds of the forest. The hill mynahs shriek, as the streak-throated woodpecker knocks on the wood. A serpent-crested eagle looks away, and the langurs exercise their limbs.

A Malabar squirrel pauses in its ascent up a tree and looks curiously at us, as I peer at it through the camera lens. And then the drama unfolds. A female elephant gracefully steps into the pool, and starts quenching her thirst and showering mud liberally on her.

She pretends to ignore us, carrying on with her evening ablutions, and slowly turns away. Soon a calf joins in and they enjoy a private moment in the pool. We watch them in complete silence, with a little bit of awe as well and then continue with our journey, hoping for more encounters.

The backwaters of Kabini

As we meander through the woods, the path takes us down to the backwaters of the River Kabini. This is the moment that we are all waiting for. The blue green waters with forests on both banks, the sun-lit bamboo trees, the golden-streaked sky blind you for a moment.

But the real showstoppers are the elephants. Hundreds parade down the banks of Kabini, basking in the sun, dancing, swimming, tearing and feeding on the bamboos. The forests belong to them. The tuskers loom large as a couple of them are locked in a conflict. A trio dance their way into the forest. Awed by their sheer size, we stop by to record the phenomenon.

As cameras come out, our naturalist says that large families with calves migrate to these backwaters every summer looking for food. “This is Asia’s largest congregation of elephants,” he announces, explaining that the forest was once the hunting ground of the Mysore Maharaja. A dam was built on the river, creating these backwaters which separated the forests — Nagarhole and Bandipur. To the elephants however, it is one seamless home with a perennial supply of food.

Centuries ago, when India was ruled by the royalty, the wild elephants used to be

captured here in a style known as ‘khedda’ and then trained for war. Drummers would drive an entire herd into a wooded enclosure where domestic elephants called ‘Kumkis’ were used as decoys to calm them.

Today, however, the elephants roam free  across this wooded territory. “This dam has actually done a lot more good than harm to wildlife,” concludes our naturalist as we return to the resort to enjoy a boat ride on the Kabini. As the lights go down on the river, the water birds become silent, but  the forests come alive.

We return to the resort, which was the erstwhile hunting lodge of the Mysore Maharaja and is now managed by the Jungle Lodges and Resorts, an eco tourism and wildlife initiative started by the local state government here.

Snuggling into our cottages, we listen to more stories of wildlife encounters. Kabini is a treasure trove for wildlife enthusiasts and tourists and today several luxury resorts and tented camps have mushroomed here. However, wildlife safaris are regulated by the forest department.

The river terns of Bhadra

I move on, journeying from one forest to another, passing by dusty hamlets, following the course of many a river. Kabini slowly gives way to Bhadra, another river whose story revolves around a dam built over it.

I am in a small village called Lakkavalli where the backwaters of the Bhadra, surrounded by pristine forests, have lured many a wild creature. There are elephants, gaurs, wild boars, leopards and tigers in these jungles, but the story is not about them.

As morning dawns in Lakkavalli, it brings with it some gusty winds. But that does not stop me from sailing in a small boat to one small island called “hakki gudda” or the island of birds. The backwaters are scattered with sandy islands where life unfolds every year.

Come January and the entire river is flooded with river terns who flock here in thousands to breed  and nurture their young.

They live here until the chicks are old enough to fly, and the migration starts only when the monsoons drench the islands. They return again in January to build their families again, only to find their home sometimes submerged in water.

I check into another Jungle Lodges and Resorts property called the River Tern Lodge and am all set to take a boat ride on the river. The moody winds blow our boat away as the water splashes right in. As we continue to bob in the river, the noise is absolutely deafening.  And before we know it, thousands of winged creatures fill our eyes and camera lenses.

The birds with their yellow beaks and red feet fly past us, pushed by hunger and by the strong winds. The chicks are waiting at the edge of the island, screaming their lungs out, with their mouths open wide as their parents hover around with the local fish or ‘bilchi’ in their mouths.

Some of their nursing spouses, hiding in their grass, crave for food too. The river terns scoop down, landing carefully and dropping the ‘bilchis’ to their family, only to fly again to pick up more food.

As the boat moves closer, the birds yell in panic and fly to the other end of the island, while the chicks, who are still learning to fly, trot around the surface. Some brave ones come to the water’s edge, burying their heads in water. The rest are focused. Only food is on their mind.

As we watch in silence, I see life unfolding in a remote corner of the world. The locals here believe that the river belongs to them and they wait for them to return every year

The winds are silent as we sail past the Bhadra dam and that is when it strikes me. Dams, I realize, have always been in the eye of a storm as they submerge villages, dislocate people from their homes, create angst in their lives and destroy many an eco-system. But here in Bhadra, as in Kabini, they have been responsible for creating and nurturing life.

Both Kabini and Bhadra are rivers in the Karnataka state of South India and they have rich deciduous forests on their banks, which have now become national parks.

Bangalore, the capital city of Karnataka with the closest international airport is the hub to get to these national parks. Accomodation is available in these national parks as well as organized safaris and boat rides. For details, please visit www.junglelodges.com. 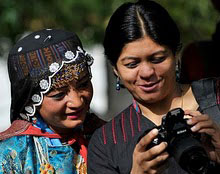 Lakshmi Sharath is a media consultant from Bangalore, India, but her passion lies in travelling, travel writing and blogging.

A Tryst with Bali’s Gods and Goblins

Thattekadu, India: My Date With the Birds