A Segway Tour of Paris: Detours You Won’t Find in Your Travel Guide

Sure, you’ll visit the Eiffel Tower, and the Arc de Triomphe, but to glimpse a more authentic Paris, consider taking a few detours. Unique memories are sometimes made in the most unexpected places, so stash a copy of this article inside your travel guide when you head to Paris.

These are the unexpected spots where my favorite memories and Parisian impressions were made.

At school we called it an overview: a little taste of the things we’d study more thoroughly in the future. In Paris, the effective overview is a Segway tour.

Segways are those two-wheeled scooter-like contraptions that you ride standing up. They look a little like an old-fashioned lawnmower with a platform for standing.

The four members of our tour, all new to Segways, were a bit wobbly at first. After about twenty minutes we were riding around as if we dodged Paris traffic every day.

Our knowledgeable guide from Fat Tire Bike Tours led us on an adventure past L’Ecole Militaire, Hôtel des Invalides, La Place de la Concorde (which saw the end of Louis XVI, Marie Antoinette, countless Parisians, and every year’s Tour de France), over some notable Seine bridges, through the Tuileries (we had to walk our Segways lawnmower-style since motorized vehicles are not allowed), and finally to the Louvre.

Not only did we attract a lot of attention (we’re in a lot of tourist snapshots, I’m sure), we had a lot of fun and snapped unique pictures of each other perched on our Segways in front of famous Parisian landmarks.

We learned some interesting facts, too: those things that look like bullet holes in the façade of L’Ecole Militaire (still an active military school), are from French guns. During the Nazi occupation in World War II, the French Resistance was able to flush the Germans out of L’Ecole with incessant barrages of gunfire.

At Hôtel des Invalides (still an active military hospital), we learned that Napoleon is inside entombed in six coffins: one gold, two silver, two lead, and one mahagony.

During the Segway tour, our group took a lunch break in the Tuileries, the gardens outside the Louvre. There are three outdoor cafes operating here, serving a variety of casual French food.

I had to try a French hot dog: two dogs end-to-end on a length of baguette with melted sharp cheese on top. Others tried the ubiquitous croque monsieur, a ham sandwich on white bread with melted cheese on top.

Fat Tire Bike Tours is an American company, and besides Segway, bike, and bus tours, they offer Internet access with American keyboards.

French keyboards can really slow you down, and this is especially troublesome when you are paying for access by the minute. ‘Q’ is where ‘A’ should be, numbers all require the shift key, and we never did find the comma.

While strolling on the two-mile long Boulevard St-Germain, I found the umbrella shop Alexandra Sojfer, recommended by a fellow student in my French language class. This shop has been in place since 1834 and provides a lifetime guarantee on its gorgeous umbrellas and parasols.

The umbrellas are not inexpensive, and they are exquisite. Trying to choose between the ruffled and flowered varieties in all combinations of colors, I knew I was selecting an heirloom: a monumental decision!

At last, I selected a style made of two fabrics (2-ply!): a mossy green on top and floral underneath. Très élégant! And what a treat it is on a rainy day.

For more practical souvenirs of Paris, check out Monoprix: a cool chain of stores that are part department store and part grocery. At the Champs Elyssées branch, I found some beautiful scarves (not the kind made in China for tourists with the Eiffel Tower on them), and adorable French-made onesies for a new baby I know.

Downstairs in the grocery, among the gourmet treats, I chose a French citrus honey from a selection of many types.

For some feline friends back home, I stopped in the cat food area. Surprised to find that most of the brands and flavors are the same as we have in the U.S., I finally settled on a variety pack that included pouches of rabbit and duck flavored food. These are two flavors I know my cats have never tasted. They were a big hit!

After visiting the popular sites of Paris, slow down for a break in a park to people-watch. After visits to the Musée d’Orsay and the medieval Cluny Museum (in the Latin Quarter), I took a short tour to the Luxembourg Palace and Gardens.

Sitting here with my chocolate ice cream cone in the presence of the grandiose palace built for the Medicis (and now used by the French Senate), was an experience right out of the cinema.

Couples, families, and working people taking a break were strolling amid the vibrant flowers. Just like in the movies, children rented sailboats to float in the large octagonal pool. Other children rode on donkeys or in donkey carts. It was a slice of French culture that made a deep impression on me.

This scene repeated itself the next day at the Tuileries fountain after a long tour of the Louvre. There were no donkeys here, though, and I was enjoying a cinnamon ice cream this day instead of chocolate.

Both parks have carousels, and the Tuileries also features a ferris wheel and other rides. The children with sailboats were there along with tourists and Parisians strolling the park.

I scored a chair next to the central fountain to rest my fatigued legs.

Besides peoplewatching, taking photos, and resting, I found these green parks a great place to relax and write in my journal.

Paris Plage is another uniquely European thing if not uniquely Parisian. Some major European cities truck in sand, palm trees, and lounge chairs to the banks of their big rivers in the summer.

In Paris, this faux beach happens along the Right Bank of the Seine, and the locals flock to it in their beach attire with lotions, umbrellas, and snacks.

Besides sunning and peoplewatching, they enjoy volleyball, badminton, a swimming pool and trampolines. Cars are banned from the adjacent Georges Pompidou Expressway, creating a pedestrian mall with even more attractions and diversions.

And one more thing: when you’re looking for a light meal, don’t pass up the ubiquitous crêperies. These casual, inexpensive restaurants fix dinner and dessert crêpes in many different delicious ways.

I chose the Hawaiian crêpes, but in spite of their name, they were très Parisienne! These relaxed, casual eateries are a great place to ponder your new Parisian memories. 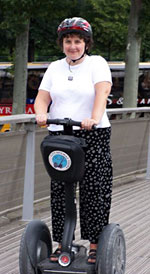 www.gonomad.com
This article was last updated Aug 18, 2019 @ 2:11 pm
If we've inspired you to travel with this story, why not check out the prices to get there and make it happen. Search airfares, hotels, and rental cars here. Thanks!