The truck was loaded with bags of rice, beans and rusty fuel drums. Fernandinho, the grumpy driver, busied himself with the dirty blue tarp cover, while casting more than just sideway glances at Ria’s braless chest.

Ria, a German pre-op transsexual, and our traveling companion, didn’t seem at all perturbed by this attention. With a body builder’s physique and hands the size of baseball gloves, she was not easily intimidated.

Three boys in grey school uniforms were already sitting on a wooden bench in the cargo bed. We awkwardly climbed in and helped Fernandinho lift our boxes.

He cursed in Creole under his breath. “What do you have in there, ladies? Rocks?” he grumbled. “There’s plenty of rocks where we’re going.”

We pushed the boxes further back, between a crate of noisy chicks and a water cistern. A very young, very pregnant woman with a squirming toddler in arms, inspected the back of the truck and then, apparently deciding she wanted to travel in comfort, climbed into the cab, instead.

The school kids waved and shouted goodbyes to their friends in the street. A woman selling fruit threw a bunch of bananas into Nicole’s lap. Nicole, with her full figure, was assumed to be expecting, and hence the local women’s constant attempts to feed her.

“Snack for the road,” a boy sitting in front of me translated into Portuguese.

A few minutes later, with much honking, and waving, and shouting, we set off for Chã.

Chã das Caldeiras, on the island of Fogo, is a place where tourists usually travel in air-conditioned mini-buses, or in hired taxis. On charter day trips from Sal, with their cultured guides, they make the trek to the villages at the base of the volcano.

They sample the local wine, buy a few lava-stone tchotchkes from the blond, barefoot kids that swarm the foreigners, and then head back to their fancy beach resorts in Santa Maria.

Satisfied, and with a knowledgeable air of superiority, they explain to their friends and family, what a mysterious, odd, and surprising place Cape Verde is.

Our first trip to Chã das Caldeiras had been in an air-conditioned tourist bus. Upon returning home, satisfied, and with a knowledgeable air of superiority, we explained to our friends and family, what a mysterious, odd, and surprising place Cape Verde was.

Four months later almost to the day, we were on our way to Chã once again. This time not in an air-conditioned mini-bus, but in the back of a pick up truck filled with shouting children, squeaking chickens, and food provisions that would become dinner that night.

Our heavy boxes, loaded with books and school supplies for the kids in the village, were the reason for our return to Fogo.

The drive from São Filipe on the coast to the villages in Chã das Caldeiras can take anywhere from two to four hours. The cobblestone road leading into the interior of the island zigzags and weaves its way upward.

It was not built for dilapidated pick-up trucks, but considering the sorry state of infrastructure in mainland West Africa, this one was in an amazing condition.

Cobblestone is much easier and cheaper to repair than asphalt, and the materials are in plentiful supply.

The boys riding with us explained they made this arduous journey twice a day. Fernandinho’s beaten up, old Dyna truck was Fogo’s equivalent of a school bus, shuttling kids from Chã to high school in São Filipe and back, at a very discounted rate of 50 escudos.

After a pit stop in Patim, a village of seemingly abandoned Portuguese farmhouses; and a beer break in Achada Furna, we turned towards the volcano.

The scenery was just as I remembered it. Dry, wild, rocky and inhospitable. The massive goat herd I photographed four months earlier was still in exactly the same spot as before, grazing happily on who-knows-what by the side of the road.

After eating nothing but scrumptious goat meat for two weeks, we were longing for some variety.

I pulled out my Cape Verde Bradt guide, and the boys snatched it from my hands.

“Look, look!” They shouted pointing at the photo, showing it off triumphantly to the other passengers. Turned out they knew the girl gracing the book’s cover, and promised us we could meet her later.

“She didn’t get any money,” they complained. But it didn’t matter; in their eyes she was now world-famous.

After three odd hours of shaking on cobblestone roads, the boys lost interest in our rhythmically jiggling breasts, and had enough of staring down Ria’s tank top. We were all friends now. The kids were eager to chat and practice their English.

Like most Cape Verdeans, they had relatives in the US and Europe, and were planning to join them soon after high school. Brockton, Massachusetts, was their promised land.

Surprisingly, they said, they didn’t want to live in the US forever. Bringing money back to Cape Verde and starting local businesses were their dreams.

“Tourists are coming,” the handsome, 15-year-old Antonio said. “And more will come, if we have things they need. Electricity, flush toilets, English…”

I was surprised by his very accurate business instincts.

“Tourists mean money, but first we need money, too.” He playfully added, “you’re not real tourists. You’re friends of Vladimir.”

Vladimir was the elementary school principal in Chã, and the ultimate recipient of our heavy boxes.

Living On The Edge – of an Active Volcano

We held on for dear life to the railing, as the truck made one death defying turn after another. I was beginning to think that maybe air-conditioned tourist buses weren’t such a bad idea after all.

And then we entered the crater. Surrounded by the looming basalt walls, the rowdy passengers became suddenly quiet.

The settlement, dwarfed by the mass of Mount Fogo, looked like a collection of toy houses. The silence, the sharp, black walls, the enormous and very active volcano ahead, all demanded respect.

Fogo means fire. Fire, which at any moment could obliterate the road we were traveling on. Nicole muttered something about the surface of the moon. The jagged rocks around us certainly had that otherworldly feeling.

The people living in this odd locale were otherworldly, too. With lighter skin, straight hair, some blond and blue-eyed, they did not look typically Cape Verdean. The duke of Montrond, a long-dead French nobleman who settled this place, was very fruitful in more than just coffee and grape production.

When In Doubt – Party!

The truck stopped in front of the school and the kids ran to fetch Vladimir. After four hours of sitting atop of bags of grain, with squirming chicks in our lap, we were happy to finally stretch our numb legs.

The children brought the elders, and the entire village came out to greet us. Some mistook us for Peace Corps volunteers, joking that no proper tourists would travel with boxes of schoolbooks, crayons and play dough.

Exhausted, smelly, thirsty, and badly needing to pee, we survived a hundred and fifty handshakes, and promptly became the local attraction.

The entire evening of fun, music and entertainment was quickly prepared for us. After all, this was a Saturday night in Chã, when even the stray dogs come out to play. And tonight Chã had foreign company.

The company, after taking care of the more urgent calls of nature, was more than happy to oblige.

Chã das Caldeiras consists of two villages: Portela and Bangaeira. Cooperativa, Wine shop and Tourist Information are half way between the villages. All easily walkable.

Pousada Pedro Brabo, run by Patrick, a Frenchman following in the footsteps of Duke Montrond, has all the comforts of home – electricity, running water and good food. Prices depend on availability. We paid 3,500 escudos for a three-bed suite, breakfast included.
Phone: +238 261 8940, email
French and Portuguese spoken, and very basic English. 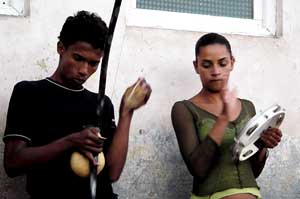 If Patrick’s place is full, don’t worry. He will tell you where to go. There are other informal guesthouses and homestays in the village. Prices start at 1,000 escudos per person. Some places may not have electricity and running water.

There’s a shop nearby Cooperativa where you can buy snacks, but it’s best to ask your proprietors to fix you up with dinner and breakfast.

Getting there and away:

TACV Cabo Verde Airlines fly from Boston once a week, as well as from many European cities, Senegal and Brazil.

TAP Portuguese airlines link CV with the rest of the world via Lisbon.
Many European charter companies offer packages to the island of Sal, and “flight-only” deals.
Within Cape Verde, connect to Fogo via Praia on TACV.

From São Filipe to Chã:

Aluguers run morning and midday during the week (500 or 600 escudos one way), on Saturday the school bus is your only option. One-way taxi ride is 5,000 escudos. Officially, there is no transport to/from Cha on Sundays, but it pays to ask around. If all else fails, start walking; people will stop to give you a ride.

Climb the volcano, dude!!! Ask at the Cooperativa for a guide.

Drink Fogo wine, watch a capoeira show, visit the school, dance some samba, eat some local goat cheese, get the runs. People will do their best to entertain you.

DO NOT waste water. Chã does not have running water. Collected rainwater is all that’s available, and when that runs out, water has to be brought up in cisterns from the coast.

Chã does not have electricity. If the place where you’re staying at has a generator, be respectful and conserve energy.

DO NOT give out gifts or money to kids. If you want to help, call or email Patrick and ask to be put in touch with Vladimir, he will tell you what is needed.

ASK before taking photos. The people are very friendly and very photogenic, so don’t act like a colonial overlord.

It is not uncommon for foreign women to have sexual relations with their Chã guides. Set the boundaries early on, and the guys will be very respectful.

Anna Etmanska lives in Arctic Sweden, and as a freelance writer and photographer, she normally reports on such lofty subjects as immigration, education and social issues. She also likes to travel. A lot. And as every self-respecting travelholic, she has a blog to keep track of her misadventures. Visit her at Budgettrouble.com.