There’s something about the Himalayas that captures today’s Western imagination like no other place.

Perhaps it’s the allure of the tallest mountains in the world, the ancient cultures and the fascinating religions. Or maybe, it’s simply because of the challenge and thrill of entering countries only recently opened to tourism.

But whether for trekking or cultural exploration, the countries of the Himalayas are tops on many traveler’s itineraries and thousands of Westerners flood the region annually.

Unfortunately, Himalayan Fever, as I call it, has had devastating results for the environment and peoples of the region.

Kathmandu, once a remote and unspoiled city has become one of the most crowded, touristed and polluted in the world. There are Pizza Huts and McDonald’s chains next to some of the most ancient sites, and hustlers and touts are becoming more common.

The trails and forests in the Annapurna/Everest areas have been devastated by hikers’ trash and deforestation for cooking fires. And while still inexpensive, the cost of travel to the region is rising with the numbers of tourists, who often come away not realizing the impact they have had.

While some have prospered from a booming tourism economy, others have been left behind. Across the region, villagers have suffered as hundreds of trekkers and tourists a day come through demanding food and water, shelter and hospitality. Many of these things are freely given, but the cost is high for people unused to such demands and intrusion.

Increased awareness of the impact of tourism on these remote and fragile regions has prompted both non-profits and governments to action. The ACAP in Nepal is one of many organizations that have instituted environmental and community and economic development programs to assist the Nepalese in their attempts to control the negative impacts of tourism.

Elsewhere, the Indian government has limited tourist access to the regions of Ladakh, Kullu and Spiti, while the Kingdom of Bhutan–having seen what unfettered tourism has done to its neighbors–has strict laws on tourism development and environmental protection.

And of course, the plight of the Tibetans has caused many in the West to become aware of the area’s political, religious and cultural issues, and prompted another wave of Himalayan Fever. While thousands of travelers flock to Tibet in the hopes of returning with some mystical power or exotic experience, only a few head to the less exotic village of McLeod Ganj, India, the seat of the Tibetan Government-in-exile and the home of the His Holiness the 14th Dalai Lama. 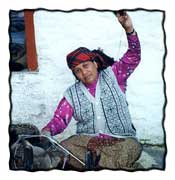 One summer, I had the honor of living in McLeod Ganj, where I was able to experience the vibrant Tibetan culture up-close and personal.

I taught English to Tibetan monks, studied Buddhist philosophy and meditation, took a Tibetan cooking class, and spent many hours in the Dalai Lama’s temple, watching and listening as he conducted services for the monks, nuns, and laypeople of his community.

In addition, I visited and volunteered with many hard-working organizations dedicated to ensuring that Tibetans still in Tibet and in exile have access to their traditions, education and livelihood.

It was inspiring, to say the least. But most importantly, it taught me that while Nepal may have the adrenaline rush, and Tibet may have “esoteric appeal,” there is more to the Himalayan region than exotic sightseeing or high adventure.

Sure, a place like McLeod Ganj has terrific trekking and plenty of unusual culture, but it also has a sense of reality and urgency: the people that live there are accessible and open about the struggle to keep their ancient culture and themselves alive in their all-too-modern condition as refugees.

This experience both fired and cured my own Himalayan Fever. Climbing Nepal’s big mountains is no longer top on my list, but returning to McLeod Ganj is. Why?

Because it was here that I learned that my presence in a strange place could actually have a positive impact, not a negative one: I learned from the many people I met, and especially from Yeshe Nyima, a young monk who was my student, that certain kinds of travel–and certain places–allow you the rare opportunity both give and receive as a traveler.

When I left McLeod Ganj, I took home more than souvenirs and snapshots; I took home a whole other–very real–view of the Himalayas. And that’s a gift from the gods.