Vysehrad – A Magic Place in Prague

We got here by accident.

We had planned to take a final tour around Prague before checking out the hotel.

We drove around without a fixed destination until we arrived at what it seemed to be a big wall surrounding a castle.

At first, we couldn’t see much but we decided to explore it a bit. That wall was really big and promised something interesting. Barely we knew that we had just arrived at the gates of the Vyšehrad Castle! We had already heard about it but it remained forgotten in our visit to Prague. Now, it was right in front of us and… by accident!

Another surprise was when we entered the castle driving the car and nobody charged us for anything. In fact, as we found out later, the Vyšehrad Castle is not really a common tourist attraction although it is simply fantastic. The good thing was that we could visit everything with little people around.

What is known as the Vyšehrad Castle is actually a large area comprising different attractions that we slowly discovered while walking around the premises.

A Bit of History

Many historians believe that the castle was built around the 10th Century and that it became the first settlement to give birth the city of Prague. Strategically, it dominates a hill over the River Vltava (the famous Moldau River; more on this later). So it’s no wonder that Vyšehrad Castle means “The Castle on the Heights” or “High Castle”.

Its 1,000 years of history saw various periods of opulence and decadence, dominance by kingdoms around, armies from France, Austria and others, each one either attempting to destroy or to improve Vyšehrad.

Most important of all, Vyšehrad’s large role in Prague’s history is why Czech kings considered Vyšehrad a great place to stay or a historical route to go before being kings.

What impresses anyone that visits Vyšehrad is its complexity as it contains a castle, now ruins of a large fortification, the beautiful Church of Saint Peter and Saint Paul, a Rotunda, large parks with plenty of statues, a casemate and the famous Vyšehrad Cemetery, everything surrounded by large walls and paths where one can walk between the walls and vegetation.

In the 19th Century, the Vyšehrad Slavin Cemetery was built (Slavin means Pantheon) and that is where many famous people were buried including Antonin Dvorak, Bedrich Smetana and other Czech composers, artists, sculptors, writers and intellectuals since 1869.

The imposing Church of Saint Peter and Saint Paul was built in the 11th Century, saw destruction and re-constructions, being the last one at the end of the 19th Century.

But, from everything we saw there, three things really caught our attention: the first one was the calm, large and relaxing park almost in the middle of the complex.

I don’t know why, but we felt some sort of peace while walking through the park and seeing big statues representing historical people, including the Libuse Princess which started a dynasty that ruled Prague for more than 400 years.

Was it maybe because Libuse was considered to have visionary powers (I would probably say, today, a “psychic” in a very good way) that prophetized Prague would be a big city? We don’t know for sure.

The second thing was the astonishing view of Prague from the hill where Vyšehrad stands, with the Vltava River calmly flowing below. While we were there admiring that grandeur, I could not stop thinking about how inspiring was for Dvorak and Smetana to write the beautiful pieces of art praising their beloved Prague.

I could almost “hear” Má Vlast while on top of the hill. We stayed there for quite a while just feeling the scene, the vibration, the warm sun and the light breeze.

More Surprises Yet to Come!

It did not go unnoticed for me a middle-aged man there with an opened book on his hands, occasionally reading it and then staring at the river and the surroundings, back and forth. Nothing in this ritual denoted fatigue or rush; on the contrary, he seemed to be relaxed and trying to locate himself in the environment in Prague.

I could not resist talking to him. I was very frank inasking him directly that he was kind of seizing the moment there, in his bare English, he told me he was a Czech advocate often visiting that spot in order to replenish himself with the energy emanating from the place.

He showed me his book from a Czech writer stating that the place we were at was exactly one of the four vortexes of positive energy located in Vyšehrad.

Chatting a little bit longer, he translated another passage of the book for me and that came as another surprise—although famous, Vyšehrad would not really be considered a touristic attraction because it would only “naturally attract” those visitors that would “feel” the vibration of the place!…

Well, well, well!… I don’t know anything about energy vortexes, nor whether they would exist there, nor there would be such an “attraction force” driving some people to the place. I cannot say that all of this would make any sense as I am not an expert on the field nor was I prepared to investigate such things there. In essence, my wife and I were completely oblivious about these facts about the Vyšehrad castle.

Was it because of the beauty of the place? Was it because there are good vibrations in the air and vortexes on the ground? Were we “naturally attracted” to that location because we felt these vibrations?

Who knows! All I know is that we where there and that we felt everything the man told us.
Unfortunately, we had to leave Vyšehrad behind because we were heading to Paris on a more than 1,000 km drive through Germany but I hope one day we could go back there.

This time, we would spend far more time to see and feel once more that strange and yet rewarding experience. And we encourage you to do the same when visiting Prague.

May the Vortex attract you to go there as well!

Tips to the Castle

The Vyšehrad Castle is very well known in Prague and is located just 10 minutes from downtown by tram or few minutes by car. Good and typical restaurants can also be found a block away from the main gate to the castle as well one inside the premises.

Maybe because the Castle is not really emphasized as a tourist attraction, we didn’t find trouble parking inside its walls.

We coincidentally stayed at the Botel Racek just a few blocks from the castle. By being an old boat transformed into a hotel and docked at the Vlatav River, we actually occupied one of the cabins, had a nice breakfast all for a decent fare (around 50 Euros in the beginning of October) without a previous reservation. 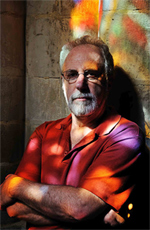 Celso Bresson is an Engineer but a traveller and an amateur photographer by heart. He lives in Ottawa, Ontario Canada. View his PhotoBlog