Welding is one of many arts and crafts taught at Snow Farm in Williamsburg, Massachusetts. Shown here is our instructor, Pat Bennett. 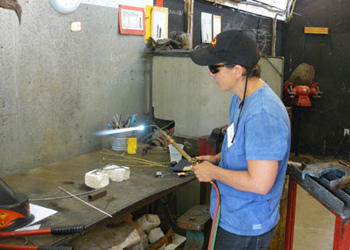 This summer I took an intensive welding workshop at Snow Farm in scenic western Massachusetts, and I came home with some fun new skills and some sculptures that I really like.

Snow Farm is a non-profit education program in Williamsburg, just west of Northampton where more than 80 artist instructors teach arts and crafts to hundreds of adults and high school students.

The program welcomes hundreds of adult students every year, as well as 100 high school students who participate in two two-week sessions. Students come from all over the US, Canada and Mexico.

Since I live nearby, I commuted to Snow Farm, but I think the next time I’m going to board there and really immerse myself in art. The food is great and everyone else there is creative and excited about their projects.

Set on a beautiful old 50-acre New England farm, the program has four living modules consisting of a series of bedrooms opening onto a a roofed deck open at either end.

Each module has its own bathroom and showers. Most people share a room with a fellow artist, but singles are also available for a modest supplement.

Culinary services are an important part of a residential program of this kind. Snow Farm has a beautiful dining hall that serves great food made with fresh ingredients and caters to all different kinds of eaters — vegans, vegetarians, gluten-free, as well as omnivores like me.
One of the residential modules at Snow Farm 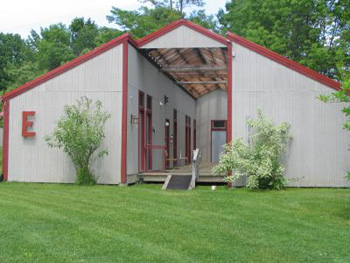 The accomodations are what you might call a five-star summer camp for grown-ups.

My workshop was for three days, but Snow Farm also offers week-long programs, and I think the next time I’m going for one of those. Imagine spending a whole week in the foothills of the Berkshires and coming home with new skills and a work of art you can enjoy for a lifetime.

The instructors stick around in the evening to keep the studios open after dinner for students who want to work on their projects.

The property was farmed by the Snow family for almost two centures before it was purchased in 1984 by Jane Sinauer, who founded Horizons New England Craft Program. In 2001 it was purchased by Josh Simpson and Mary Colwell and a silent partner, and the name was changed to Snow Farm New England Craft Program.
The dining hall serves great food for all different kinds of eaters. 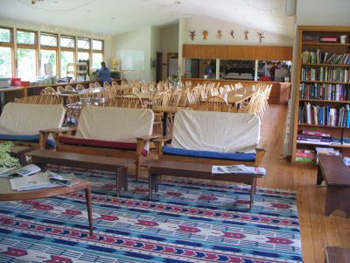 Simpson is a glassblower from nearby Shelburne Falls who is famous for his amazing globes — some of his work was purchased for the White House by First Lady Rosalyn Carter — and also because he’s the husband of astronaut Cady Coleman, who recently returned from a Space Shuttle mission.

Simpson visited the welding studio while I was there to take a look at the work students were doing. He’s something of a local celebrity: Last spring at Snow Farm’s 10th anniversary celebration and fundraiser, one bidder at the auction paid more than a thousand dollars to have lunch with him!

He’s also a good example of the kind of expert craftspeople who teach at Snow Farm. The studios all have state-of-the-art equipment, and the instructors are experienced at working with people of all skill levels.
One of Josh Simpson’s planets 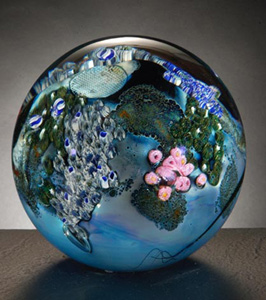 Behind it all is the desire on the part of artists like Josh Simpson to give others the opportunity to experience the joy of creating art.

While many of the students at Snow Farm are honing advanced skills in preparation for becoming professional craftspeople, some of them are duffers like me just having a great time.

I had a few ideas for projects when I first got there, and these came out pretty well if I do say so myself. But after learning more about the medium and the equipment, I discovered new and different projects that I liked even more.

My instructor, Pat Bennett, showed us a variety of different pieces of equipment and how they can be used for cutting, sanding and welding metal.

I’d been thinking of setting up a small shop in my garage, and it was a big help to have a chance to try out different saws and torches and figure out what I might want to buy.
Some of the sculptures I made from other people’s scraps 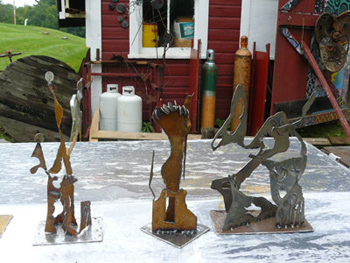 My two planned projects were a running figure made of bent and welded rebar and a Kokopelli figure in sheet metal. These came out pretty well, but I had the most fun taking other people’s scraps and welding them together in little Dr. Seuss universes.

I got a chance to use a metal saw, an acetylene torch, a plasma cutter and an arc welder, as well as tools for bending and burnishing. I’m a lot further along as an artist in metal, and I’m in a much better position to figure out where to go next.

Many other students are getting advanced instruction and learning to make their living as artists and craftspeople. This is especially true of the high school programs, where young people can assess their own goals and skills, and even find a livelihood doing what they love.

For further information on Snow Farm, visit their website at snowfarm.org