Wales: Hunting for Mushrooms and Enjoying the Sunshine 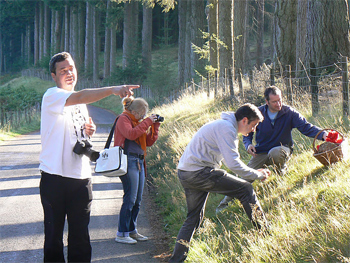 Hunting for Mushrooms in Sunny Wales

Driving along a country road near a large shimmering reservoir, Daniel Butler suddenly slows down. He jumps out of the driver’s seat and whips out a special knife.

In seconds he’s dug up a beautiful specimen, a four-inch cepe. He’s a mushroom forager, par excellence, and yesterday he took us out to learn something about the art.

It was a lovely sunny September morning in the middle of Wales. I know, I know that’s not the usual weather pattern–but for this day we were blessed with blue skies and open hearts.

Butler excited us all with his enthusiasm for hunting mushrooms and foraging for all sorts of delicious things to eat that could be found in these woods of Wales.

On his website, Fungi Forays, he lists dozens of other plants and fungi that our ancestors all enjoyed eating both out of necessity and because they just tasted good.

Among them are Cepes, also known as porcini or penny buns, Parasol (The Audrey Hepburn of the Mushroom World,) Hedgehog fungus, the Deceiver and the Cauliflower Fungus.

As import as the edible varieties are, of course,  Butler is keen to show his students the ones they should avoid. He calls these “the Nasties.” Two of the most famous mushrooms to avoid are Fly Agaric, (the classic toadstool, abundant and beautiful) and Destroying Angel which is much rarer and can kill most adults if they eat just half of one.

Butler lectures at a nearby college. On the walls of his old farmhouse, three long rutted miles up a mountain, are photographs of lovely varieties of fungi. He sends out a newsletter about fungus foraging, and is positively giddy when confronted with what he calls “a sexy cepe.”

But isn’t mushroom foraging dangerous? Don’t people die from eating the wrong ones?, we asked. “Actually most poisonous mushrooms will make you really sick, not kill you. But there is that one, the Death Cap. And others.”

He showed us one variety with a gaudy orange top, with speckles. “That one will make you really high, and then give you the worst hangover you can imagine.”

Foraging was fun, and soon we had a Goldilocks basket of plump cepes. We had a plan. It involved a drive to his house, and a four-course meal. And a few bottles of good French wine.

We emerged at altitude and looked around the place, a rambling six-bedroom 17th-century farmhouse complete with a henhouse full of birds, two raptors cawing in a big enclosure, a curious ferret and a sweeping view of the gorgeous Wales countryside in brilliant, if rare, sunshine.

Life was good. Daniel was cooking–he’d make us mushroom soup, and a mushroom-filled quiche, and he’d use a few big cepes in a risotto.

As the crisp dry white was being poured, we were regaled with tales of a pair of mushroom hunters who gorged on so many mushrooms they got sick (apparently there IS such a thing as too much of a good thing!) and of the production of mushrooms in China, where most of the mushrooms you find in grocery stores come from.

We suggested that he might want to have a B&B up here, what with all of those extra unused bedrooms. “There is a saying,” he said, “fish and visitors stink after three days. I had guests up her for six weeks once. It’s true.”

Besides enjoying our mushroom foraging adventure during our sunny week in the middle of Wales, there are also many other food-related activities for the gastronome to enjoy in this relatively unknown part of the United Kingdom.

Locavores on the Rise

This region is getting known for its intense embrace of the Locavore Movement, with chefs bragging about how short the distance is between where their food comes from and the dining table upon which it’s being enjoyed.

Among of the highlights of gastronomy we enjoyed in Wales were meeting Lord Robert Newborough,
a Shropshire resident who owns the 12,500-acre Rhug Farm Estate, where on their 2500 acre in hand farm, all manner of organic meats and field crops are raised. In the midst of building a new eco-friendly market on the busy roadway in Corwen.

In a closed loop, the farm produces all of the food needed to raise beef, sheep, lamb, turkeys chickens, and other animals and create more than 2000 different specialty products. The new farm store will be even more popular than the small shop that’s there now.

Visitors to the farm can enjoy mountain biking, gorge walking and traditional shooting and fishing on the sprawling property…but we were there to taste some of the Lord’s delicious lamb which he generously carved for us himself!

Wales is also famous for its long coastline. Among the finest products that come from the pristine waters of Anglesey at the very top of Wales is sea salt made by Halen Mon, a family company that prides itself in both its top quality regular sea salt and flavored varieties.

These include vanilla, pepper, smoked and celery seed. Owners Alison and David Lea-Wilson are proud that one of the world’s most famous chefs, Ferran Adria, who once ran El Bulli restaurant in Spain, always included a flake of their sea salt on his oysters. And of course, there is the royal connection, since Halen Mon has graced the tables of the

Royal Family for decades. Visitors who want to sample the salt can also enjoy their fish and other creature-filled salt water aquarium, right next door to the salt factory.

We trudged down to the water at Anglesey to meet another man who makes his living from these pristine waters, in the Menai Straits.

Menai Oysters are plump—sometimes too plump, we were told by Shaun as he stood in his hip waders and rubber boots next to his hundreds of oyster beds.

The oysters are bought as tiny seeds from a dealer in England and then as they grow, are moved again and again, so that one bag of babies will turn into twenty big bags of gigantic full grown oysters.

Unfortunately, visitors to Shaun’s oyster growing beds aren’t allowed to suck down these beautiful bi-valves…first they must be run through ultra-violet light to purify them.

Wales was proving to be a tasty destination indeed, as our group of food writers enjoyed four-star meals with top rated chefs throughout the island. At our trips end, we met a woman who also makes her living from the sea.

Gil Reacord, a fishmonger in the seaside village of Aberyfi on the Wales coast, says that the more
people taste underutilized species, the more they will be willing to forego their traditional and familiar types of fish and this is good for the planet.

Gil Reacord, a fishmonger in Aberyfi, Wales promotes underutilized fish species at her shop on the coast.

Reacord was once a chef. But eight years ago she got into the fish business and she told us she wished she had done it sooner.

“This is just what I want be doing.” She promotes underutilized species of fish, like the mullet that tastes a lot like the sea bass. She also promotes using bycatch, fish and other creatures caught in lobster traps that are often tossed back dead but can be used and sold in the market.

Wales is an excellent destination if food quality and organic are important to you. Between the farm fields, the organically raised animals and the top quality seafood, if you love to eat and eat well, put Wales on your gastronomic radar screen!

Find out more about visiting Wales at VisitWales.com

blogs.gonomad.com/readuponit
Like this article? Share it with your friends!
If we've inspired you to travel with this story, why not check out the prices to get there and make it happen. Search airfares, hotels, and rental cars here. Thanks!