My daughter Sarah and I drove up to Squam Lake last week for a father-daughter getaway. She’s pretty busy down in New York with acting and modeling and writing, so when we get a chance to spend time together it’s a big treat for me and I like to find a great destination. Squam Lake was absolutely perfect.

According to local historian Tink Taylor, people have been coming to Squam Lake for their summer holidays for more than ten thousand years to swim and fish and hunt and enjoy the haunting cry of the loons, which the Abenaki likened to the laughter of the gods.

It was overcast on Friday and Saturday, but we found plenty to do at the Squam Lake Nature Center, the Sandwich Historical Society and Grange, lots of really cool art galleries, some great restaurants and a performance of one of the greatest plays ever written, On Golden Pond, directed by the author, Ernest Thompson, at the Little Church Theater.

The loons figure prominently in the 1979 play “On Golden Pond” and the 1981 movie. The play was originally set on a pond in Maine, but the movie producers chose Squam Lake for its east-west orientation, and the filming of the movie became an important chapter in the history of the region.

Saturday afternoon the sun came out just in time for us to take some photos of Beede’s Falls, a beautiful series of glacial potholes where the Bearcamp River comes tumbling over the bedrock making lots of idyllic swimming holes.

And Sunday dawned bright and clear for our cruise around Squam Lake with Cindy O’Leary of Experience Squam. As we approached the cottage where the movie was filmed, a pair of loons came out to greet us.

Loons are an ancient bird, much older than ducks and geese, and they have solid bones, unlike ducks and geese which have hollow bones. This means they’re better at diving than they are at flying. They nest at the water’s edge where sometimes their nests are disturbed by land predators or by waves from the wakes of passing motorboats.

One of the conservation projects of the Loon Preservation Committee, based in Moultonboro, is to construct covered nesting rafts for the loons to use. Cindy showed us one of these rafts with a loon comfortably perched inside.

The SLA works with the State of New Hampshire to establish guidelines for the use of the lake that protect wildlife and still allow access for recreation. And there’s an informal network of landowners who snap up parcels of land when they come one the market to make sure this gem of nature remains unspoiled for generations to come.

The Lap of Luxury

Sarah and I arrived at The Manor on Golden Pond in Holderness Thursday evening, where Brian and Mary Ellen Shields really made us feel at home. They were expecting us, and they kept the dining room open. How nice is that? While it has all the charm of a B&B, it’s really a small luxury hotel with beautifully appointed rooms, a full spa, jacuzzis in the rooms, swimming pool, tennis courts, a piano bar and a gourmet restaurant.

Friday we had breakfast with local historian Tink Taylor, who told us about the grand celebration planned for the August, 2011 250th anniversary of the founding of Holderness (called a semiquincentennial) with parades, concerts, dances, socials, historic presentations, an Abenaki encampment and powwow, storytelling, reenactments and lots of other events.

Then it was off to the Squam Lakes Natural Science Center, a great family attraction where kids and adults can learn all about the wildlife and the ecology of the region.

There are bears, mountain lions, otters, coyotes, hawks, owls, eagles and just about every other species of wildlfe, with lots of interactive exhibits where kids can learn by pushing buttons, pulling levers and opening little doors.

Back at the Manor, Sarah had a full treatment at the Seasons Spa, complete with a maple sugar mud wrap.

After a delicious dinner at the Squam Lake Inn (scallops with an apricot-chipotle glaze, yum!) we went down the street to the Little Church Theater to see the play. We had a chance to meet Ernest Thompson, who lives nearby and gives acting and playwriting classes at his home.

The play was great. It really is a masterpiece, and Thompson has added songs by his friends Natalie Merchant and Carly Simon. There were packets of tissues in every pew, and we needed them as we watched crabby old Norman Thayer learn to open up to his daughter and her new family.

Saturday we took a short drive over to Sandwich where Susan Davies, owner of the Jonathan Beede House, gave us a tour of this beautiful historic town. The Historical Society has all kinds of exhibits about the history of the town and the newly restored Grange gave us a glimpse into the lives of the thousands of yeoman farmers who lived there over the centuries.

The town is like a giant 3D picture postcard of a New England town, with some of the best preserved architecture in the world.

The League of New Hampshire Craftsmen was founded in Sandwich and their first gallery, Sandwich Home Industries was built there. Now the League has galleries all over the state.

We also saw lots of really great art at the Surroundings Art Gallery — a really great place to browse — and Willow Pond Antiques, where Sarah had fun trying on antigue clothing and accessories.

We made a visit to the Jonathan Beede House, a beautiful 1787 center-chimney colonial, lovingly restored, which gave us a look into the lives of the early settlers. The house was also a stop on the Underground Railroad, as the Beedes were part of a network of Quaker abolitionists. Though it’s less than ten minutes from the center of town, it’s the kind of beautiful, quiet place where I could happily spend at least a week just listening to the crickets.

Then Susan took us to magnificent Beede’s Falls where the Bearcamp River tumbles over the bedrock shaped by the glaciers into a series of delightful swimming holes surrounded by little sand beaches, ferns, mosses and lush vegetation. The sun came out just in time to give us some good photos.

Sandwich is a great starting point for hiking and mountain biking, with trails into Sandwich Notch and beyond into the network of Appalachian Mountain Club trails through the White Mountains, but even the short, local trails will reward hikers and bikers with some of the most splendid vistas in the world.

The town has just over 1300 year-round residents, and perhaps five times that number of summer visitors (at any one time), but in the Fall more than 40,000 people converge on the town for the Sandwich Fair, one of the largest and most famous fairs in New England.

In the evening we had a splendid repast in the upstairs pub at the Corner House, where we got a chance to talk to year-round residents and summer visitors about the Squam Lake area. It’s the kind of place that families come back to year after year.

Sunday dawned bright and clear and after another lovely breakfast at the Manor, we went down to the dock in Holderness to meet Cindy O’Leary of Experience Squam and her daughter Betsy, who took us on a cruise around Squam Lake, aka Golden Pond.

Holderness is situated on a narrow channel that connects Little Squam Lake with Big Squam Lake. Big Squam is actually more an interconnected network of coves, lagoons and islands.

The Squam Lakes Association, founded in 1904, works with local landowners and the State of New Hampshire to protect “natural beauty, peaceful character and unique resource values of the lakes and surrounding area,” and promote “careful use and shared enjoyment of the lakes, mountains, forests, open spaces and wildlife of the Squam Lakes Region.”

The Association owns two islands where camping is permitted and maintains more than 50 miles of hiking trails. They also monitor the water quality of the Lake and set speed limits and “no-wake” zones to ensure public safety and protect wildlife.

Cindy took us to the famous cottage where the movie was filmed and we were delighted when two loons came swimming out to welcome us with their famous hoots. She also showed us the island where young Billy Ray cracks up the Thayer’s boat.

We also saw the dock where Jane Fonda practiced her famous backflip day in and day out to avoid using a stunt double.

We also went by the Rockywold Deephaven Camps, founded at the turn of the century, where many families have come year after year for generations, and Chocorua Island, also known as Church Island. It’s the site of the first overnight summer camp in America in the 1880s, and nondenominational services have been held there since 1941.

Where better to worship the Creator than out in the open air in the midst of this indescribable natural beauty?

The Hartshornes and the Fondas

When Jane Fonda first saw “On Golden Pond,” as a play, she bought the rights so she could produce the movie that gave her father one of the greatest roles of his stellar career. It also won him the Academy Award which, surprisingly, he had never won. (His portrayal of Tom Joad in “The Grapes of Wrath” was nominated but lost to his old friend Jimmy Stewart’s performance in “The Philadelphia Story.”)

In her autobiography, My Life So Far, Jane explains that she had tried her whole life to please her father, but he remained emotionally distant, partly because of the pain of Jane’s mother’s suicide.

And although Henry remained a pretty cold customer, the movie did bring father and daughter closer together. “I’m not a religious man,” he wrote in his autobiography, “but I thank God every morning that I lived long enough to play that role.”

Henry was unable to attend the Academy Award ceremonies. Jane accepted the Oscar on his behalf and delivered it to him at home along with the rest of his children and grandchildren.

Sarah and I didn’t have a vast emotional chasm to cross to connect with one another. She and I have been traveling buddies ever since she was born. Even so, our trip to Squam was a great opportunity to take a break from our busy lives and really catch up with one another while enjoying great theater, great art, great food and spectacular scenery. 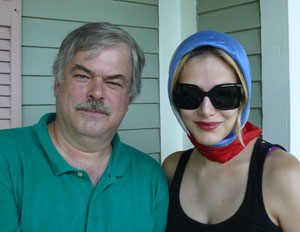 Stephen Hartshorne is the associate editor of GoNOMAD.com. He writes a blog called Armchair Travel about books he finds at flea markets and rummage sales. Sarah Hartshorne is currently working as a model in New York City. She was a contestant on America’s Next Top Model Cycle 9 and can be seen in the constant reruns on MTV and VH1.