As I boarded the plane in Beijing, I had no idea where it would land. How thrilling it felt—after all, how often does one board a commercial airliner in this post 9/11 world without a knowing where it’s bound? So I didn’t ask. The going was good.

As a guest of an Asian tourism board on a 10-day jaunt through China, three other journalists and I were to be given a tour of several other cities before attending the 2010 World Expo in Shanghai. So when they handed me a ticket at the airport, I simply followed the others to the gate and enjoyed the suspense.

Once aboard, I was surprised to be seated in the first row of a smooth Air China flight. I sipped champagne and tried to sleep. As I drifted off in the woozy bliss of business class, I thought about the opening scenes of the old James Hilton novel/movie, Lost Horizon.

A small plane evacuating a misfit group of Americans from a war zone is hijacked. Some passengers panic and bang on the cockpit door demanding to know where they’re being taken; others just shrug and decide to take a nap—what happens happens. They eventually crash land somewhere in southwest China and awake in a magical place called Shangri-La, hidden in the high Himalayas.

A misty rain fell on the town of Tunxi in the Anhui Province of southeastern central China where our plane finally landed. It was almost midnight when a guide greeted our group and briefed us on our itinerary.

We’d first spend the night in a business hotel on the outskirts of town, and early in the morning we’d leave our luggage, bring only what we could carry on our backs and climb Huangshan Mountain. There we’d spend a night near the summit in a rustic hiker’s hotel.

We’d climbed the Great Wall, eaten Peking duck, seen an acrobat show, perused the pearl markets and wandered in ancient hutongs. It had been wonderful, but I was exhausted. Beijing can be hard on the lungs and the soul after a while; the scar-like sky of white-noise smog had been suffocating. It looked like a 1960s television channel after the station signed off for the night.

In Tunxi, the sky was clear, but the Huang Shan Guoji Dajiudian (Huang Shan International Hotel) was thick with cigarette smoke. Still, a bed was all I needed, and I was happy.

Our guide arrived the next morning, and we rode into the gentle low light of picturesque rural China.

Here at last was the land I’d dreamt of as a child: rice fields dotted with men and women wearing round bamboo hats as they bend over glistening wet rows of rice with stiff long hoes. Here boys carry water in buckets balanced on the ends of slim bamboo poles. Children and old women with colorful parasols walk along the ribbon-like road.

Dogs run alongside cars. Donkey carts wobble past us. Pigs snort and wander along the shoulder of the road. As we pass the bamboo forest of Zhuhai, its green frog hue set against the grey blue sky is the calming color of the sea.

The road rises. Small hills roll into bigger ones. Vast lush valleys tug at every green bend in the two-lane road. After about an hour, we park and walk to the edge of a small village that seems to grow from the ground like reeds from a pond.

The watercolor way that the whitewashed walls of houses are reflected in a small mirror-like lake and “moon pond” seems surreal. School kids sit along the banks with easels and paint while others walk single-file across a delicate arched bridge. I quietly follow.

My Kind of China

This is my kind of China. (Not that businessmen and bicycles, pearl markets, knock-off designer bag makers and Hello Kitty-kids in alligator shirts aren’t China, too—that’s interesting in an altogether different way). But here I fully expected to see Ping the duck from my old bedtime storybook, or round a corner and come nostril-to-nostril with a fire-snorting dragon. Here time could stand still, and I with it.

The village of Hongcun has rested on the southwestern slope of Mount Huangshan since 1131 when, according to the United Nations World Heritage Convention, it was first founded. It began with just 13 houses, and over the ages the village prospered from 1401-1620 and from 1796-1908 before it fell into decline.

It wasn’t until 2000 when Crouching Tiger, Hidden Dragon was released that tourism exploded; scenes from the movie had been filmed in the village. That same year, together with Xidi (another ancient village nearby) Hongcun became a UNESCO World Heritage Site.

Today about 150 ancient residences stand in the village, featuring detailed carvings and intricate architectural features dating back to the Ming and Qing Dynasties.

While in the area, we also visit the village of Xidi, a quiet tourist-free place where people generally go about their daily lives. Hongcun is filled with visitors and students on holiday, but of the two villages, to me it seemed more visually arresting.

It is said that the village of Hongcun is laid out in the shape of an ox with a nearby hill, Leigang Hill, being its head, and the two trees standing on the hill being the horns. I was sad to leave Hongcon. Little did I know, my own Shangri-La lay just ahead at Huangshan Mountain.

In 2008, director James Cameron was in Beijing promoting his hit movie Avatar when he said that his inspiration for the Hallelujah Mountains in that film came from Huangshan Mountain because its giant granite peaks appear to be floating in the clouds. 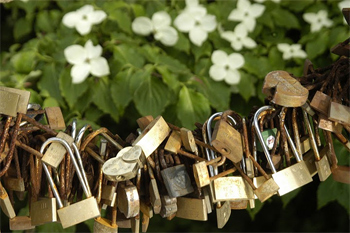 Huangshan, which means Yellow Mountain, was (according to geologists) formed perhaps 100 million years ago. Some of its many peaks jet more than 3,500 feet into the sky. Today it is also a UNESCO World Heritage Site, and it covers a core area of almost 100 square miles, along with an additional buffer zone of 88 square miles.

More than 32 miles of footpaths take visitors to scenic overlooks and several rustic hotels near the top.

To reach many of those paths, visitors may take a long steep cable-car ride into the clouds. Below, pine forests create a dense blanket of mist-covered conifer, giving the mountains an otherworldly feel.

After the cable car ride, we faced a steep 1-hour hike up what seemed to be a never-ending stone stairway. People say their calves ache and shins hurt more on the way down than going up. Climbing, my muscles burned, and I felt short of breath.

Finally we came to a three-star hotel (and arguably a 1-star hostel). From outside it looked like a government building. I was surprised to see it surrounded by colorful pup tents and students camping. We would stop our hike here and spend the night.

Inside, the smell of cigarette smoke filled the lobby, but my room was fine. The windows opened wide to the cool thin air. Quiet and suitable (clean would be an exaggeration) my room was lined in wood paneling and felt like the inside of my uncle’s old camper trailer; it smelled like it, too, in a friendly childhood memory sort of way. The bathroom was dismal, but there was a hot shower. Strangely, I liked it all very much. I was already smitten with the mountain.

The hotels on the mountain are incredible when you consider how they were built. Each brick, board, sink, shower, napkin, fork, bit of food, and all the pillows, sheets, curtains, ATM machines—everything—has to be carried up the mountain on men’s backs.

On the trail boys carry large loads balanced on long sticks across their shoulders. Even the trash and laundry must be carried down each night in enormous bags. When you consider the construction materials of these two- and three- story hotels, the enormous restaurant kitchens and dining rooms, and the quantity of fine fresh food each day, it seems impossible to fathom.

An hour later, we made another trek to a scenic spot another hour’s hike above the hotel. Along the way we saw two more hotels and lots of campers. At one point we had to stop and wait while dynamite blasts shook the mountain as construction workers cleared land for new hotel sites. I watched for rockslides and plugged my ears.

Huangshan Mountain has often been the subject of Chinese black-and-white scroll paintings, and it is known for four spectacular features: ancient tall pine forests, steaming hot springs, stunning granite rock formations and views of the clouds that are divided into five distinctive seas—the Sky Sea, and the North, South, East and West Seas. One area of the mountain is called Beginning to Believe peak. I like that quite a lot. There at the summit, the clouds are dense, cut only by slivers of sunlight and tops of evergreens.

Along the rim of each cliff are chain railings, and hooked to those are thousands of padlocks etched with lovers’ names. The keys are thrown over the edge as couples pledge undying love. An ancient Chinese legend tells of a couple whose parents say they cannot marry, so they jump off Huangshan Mountain. That night, I slept hard in my room above the clouds.

Hiking down the mountain the next day did hurt more than climbing had. I’d felt peaceful, grounded and grateful there. The hard work of hiking became a drum-like cadence of breath, body, brain, muscle and heart, and I felt, simultaneously, that I could not take one more step and that I could climb like that forever.

When the plane left Beijing two days earlier, not knowing where we would land made me feel like a “world traveler.” But as I descended Huangshan Mountain and passed a boy trudging up toward the top with a kitchen sink on his back, it occurred to me that not knowing hadn’t made that true. Instead, being a true traveler means carrying only that which is essential (like wonder, joy and gratefulness, for instance), like a hotel carried up a mountain piece-by-piece.

If we bring just these things, we’ll have all need when we arrive—wherever life hijacks and takes us. We must not be lulled into a false sense of security, believing we are somehow in control on this journey. We must rest—quit banging on cockpit doors—if we’re ever to reach Shangri-La.

An Annual Extravaganza in Quebec
Poland's Sopot Spa: The Pearl of the Baltic Sea
Korea: Pitching In to Clean Up An Oil Spill
Mexico: The Land of Amazing Volcanoes
India: Tips on What To Do When You Lose Everything
Vinales, Trinidad and Havana, Cuba--On a Budget

Janis Turk is a travel writer, photographer, and author who has appeared in travel segments for CNN’s airport network, the Dallas Morning News and others. Her work also appears in magazines and newspapers and popular travel websites. Her most recent book Frommer’s TEXAS is available on Amazon.com and in bookstores everywhere.

www.TurkTravels.com
Like this article? Share it with your friends!
If we've inspired you to travel with this story, why not check out the prices to get there and make it happen. Search airfares, hotels, and rental cars here. Thanks!