Making a New friend on a Paris Walking Tour

There are few things more frustrating than being confined to a beach apartment in Brittany, France, growing plump on French wine, and tiny lemon tarts.

OK, so the lethargy was amazing, but that’s not the point.

When my company sent me to Lorient, France for two weeks on a very important mission, I puffed with pride. Of course, I could manage just fine with my little French knowledge. No problem.

After completely confusing my co-workers’ affectionate cheek kisses for sexual assault, drinking sour cream which I thought was milk, and entirely confused with the geography of the area, I decided I could not waste my single night in Paris on the return journey. I had dawdled and fumbled enough.

The tribulations of a blundering fool

However, disaster kept thwarting me at every corner.

2) My hotel was outside the city boundaries, near the Charles de Gaulle airport, where absolutely no tour operators would venture.

3) I only had one evening to explore.

4) I was a young lady traveling alone.

Running out of options, I Googled “private tour guides”, and stumbled upon Context Travel: walking tours for the intellectually curious.

“Intellectually curious” is not strict criteria

This is the real nitty-gritty of travel, the fine details often overlooked for the more popular highlights. Of course, the highlights are available for anyone who asks, and so I did.

I was contacted by a woman named Lily, and our exchange of emails left me feeling certain that I was making the safest choice. She was immediately friendly and eager to help and tailored our tour so that I could take in as much of the city as I could in a limited amount of time.

Meeting Lily was a bit of a gamble. When I pulled up outside her office, I had to enter the ancient building with a password, cross an overgrown courtyard, and lug my suitcase up four flights of stairs. Briefly, my paranoia forced me to wonder if I were being led into the den of a sexual assailant, but then the light on the stairwell overhead flicked on, and a blonde woman poked her head over the railing.

I liked Lily straightaway. She greeted me with a can of soda and allowed me to store my belongings under the desk. She listened sympathetically about my cramped train ride from Lorient, and we discussed our lives in Canada.

After speaking English at an excruciatingly slow pace for two weeks, I was incredibly relieved for a normal flow of conversation.

Since it was my first time in Paris, I asked Lily to show me all the major highlights. The fact that this tour was completely customizable was the highlight of my trip: we crammed a great deal of walking and sightseeing into five hours.

We wandered into the Notre Dame, gaping open-mouthed at flying buttresses and columns and gothic stained-glass windows. I saw the Place de la Bastille, the Pantheon, St Germain des Pres with its ancient tower, the Grand Palais, and the Louvre.

And yet, we still had time to discover the Italian district, browse a Canadian bookstore, read poetry painted on a building, and skip into Gelati Alberto for my first gelato experience shaped like a flower (Lily insisted it was the best, and she has great taste).

Later, we paused for supper at a creperie, where we downed a bottle of Apple Cider and sampled various crepes, elbow to elbow with the people seated at the next table. After our meal was over, Lily introduced me to the chef, a friend of hers, and so Paris suddenly became a little more personal.
Lily translated this poem for me.

Our last stop was the Eiffel Tower. Lily took me to a spot along the Seine where I had a clear view, and then she told me to wait.

When the Tower began twinkling, I nearly toppled headfirst into the water. The view of the monstrous structure was impressive enough, but I had absolutely no idea that it twinkled for five minutes every hour.

When I had asked to see the city “lit up,” I meant by night. The view was spectacular and romantic and my God I would have hugged Lily right then if doing so didn’t breach some sort of guide/tourist etiquette.

Honestly, the cost of the tour was steep. I shelled out close to $400 (Canadian) for five hours, but after a week of dalliance, I didn’t care. Some things you can’t put a price on (unless your Visa is maxed out).

Without Lily’s expert knowledge of the city and her ability to speak two languages, I would never have enjoyed Paris as much as I did. When the evening was over, she ensured I safely found a cab, kissed me on both cheeks, and told me to keep in touch.

I left Paris richer, with one new friend. 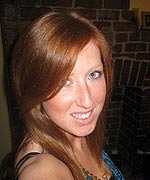 Candice Walsh is a technical writer for a deep-sea technology company located in Newfoundland, Canada. Her passions list travel, nachos, and beer. Check out her blog, Free Candie