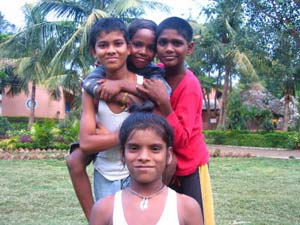 Boys in the community village – Photos by Mark Helyar

It wasn’t the violence that perturbed me as much as my own naivety. I should have known better.

There was this encounter, you see, with four young lads on the street. They were dirty and scruffy but friendly enough. Or so it seemed. The moment I stopped for a quick chat, however, they leaped on me and tugged at my bag with the ferocity of wild monkeys. I was surprised by the strength of their rough hands and sharp nails; they drew blood as they cut into my arm like razors.

Had I experienced the incident a couple of weeks earlier, I might have thought twice about spending time with the (ex-) street kids of Vijayawada. As it happened, though, my prime purpose in the city was precisely that.

SKCV (Street Kids’ Community Villages) is a project for homeless young people in Vijayawada, Southern India. Founded in 1984 by Manihara, a family friend, it is home to over 150 boys, girls, and young adults who would otherwise be living rough on the streets.

There are about 19,000 street and working kids in Vijayawada and over 100 million throughout India. Invariably they are children who have run away from broken homes, abuse, and family conflict. Some are abandoned or forcibly thrown out whilst others are attracted to city life by the glamour and appeal of mass media, magazines, and movies.

Girls as young as nine are lured into prostitution on the false promise that they may earn a good wage. Many are never seen again, often dying from AIDS.

Children contribute to more than 20% of India’s GNP, rag picking, luggage carrying, selling newspapers and flowers, pickpocketing, pimping, or just plain begging. Street children make up a considerable proportion of this figure. They can be seen everywhere – at stations, bus stops, and bazaars – occasionally alone, but usually in small gangs. 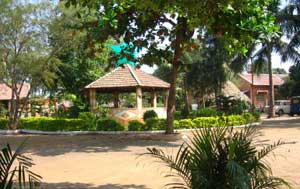 The community village in Vijayawada

Pioneered by Manihara, SKCV operates a radical system of child care which is now used in over eight countries worldwide. Its premise is simple: the fundamental need of street kids is care, security, and the feeling of being wanted.

The young people receive a non-formal education and vocational training in tailoring, computing, and farming. They eat a good vegetarian diet and grow their own produce to sell and earn pocket money.

If the boys demonstrate a commitment to the project, they move to the community village situated outside the city on the banks of the mighty River Krishna. Surrounded by palms and green fields, it is a productive and safe haven in which they live happily and securely.

Nothing compels them to stay and they are free to leave whenever they want. Few do. Indeed, many of the young boys who made SKCV their home years ago now have professional qualifications, working as teachers and managers for the project. 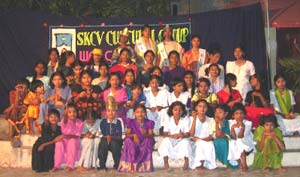 Fashion show at the girls’ center

SKCV offers fantastic opportunities for volunteers to engage with the local culture in a fascinating part of India that is easily accessible but off the track for most tourists.

There are many ways to get involved, including working in the non-formal schools in the boys’ village or girls’ center. Volunteers are encouraged to develop a curriculum topic or booklet during their stay so that they leave behind something meaningful when they return home. Subjects taught include Telegu (the state language), English, maths, arts, crafts, and tailoring. 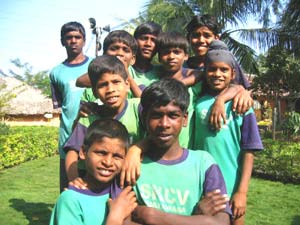 Boys in the community village

Hands-On
My lodgings were located in the medical quarter of Vijayawada. In most Indian towns, shops and public services appeared to be grouped around a particular retail theme. I found an entire street of shops selling fabric, jewelry, or, most bizarrely, a row of stores retailing Singer sewing machines. Vijayawada was no exception.
Around the corner from my apartment was the Super Speciality Dental Centre, making tooth extraction sound like an exotic menu item. There were numerous clinics specializing in ailments starting, don’t ask why, with the same letter: The Chest and Child Clinic, The Laboratory for Pain and Paralysis, and The Doctor for Diarrhea and Dysentery!

I fell into a routine in the couple of weeks after New Year, particularly with the lads who were not in school for various reasons. A few chose not to go, whilst others just preferred to be alone.

Sitting on a wicker chair outside the main house, a couple of the lads would join me to chat. Our understanding of each others’ language was minimal but we had fun. I often sneaked in a bit of English teaching without their realization. No textbooks required: our bodies were a fantastic teaching resource. Fingers for counting, names, actions, etc. We traded words and phrases; they learned some English and I picked up a smattering of Telegu. 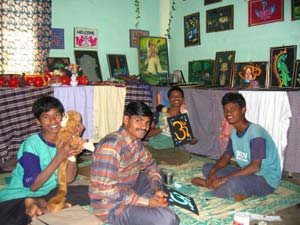 The boys’ continual demand for attention – verbally, hugging, holding hands – was intense and exhausting. But I was happy to offer it. They loved to thumb-wrestle and some of them had wickedly strong fingers. I soon became quite adept at the game but often went home in the evenings with sore thumbs!

Many of the lads displayed a natural flair for creativity. They produced incredible artwork and decorated their rooms with murals and newspaper chains. They would dance, sing, and perform at every opportunity, and, when asked, I seized the chance to co-ordinate SKCV’s dance program for a special event.

The three-hour-long performance, which they also wanted me to MC, was pure energy on legs and stretched my scant command of Telegu to its limits!
With hindsight, I was grateful for my vicious encounter with the young street lads. Raw, hurting, wild, they represented exactly the young people SKCV aims to help. Contrasted with the affection and warmth that greeted me every day at the community village, the difference could not have been more pronounced. The boys had a deep brotherly regard for one another and a healthy respect for the opportunity they’d been given. It was a privilege to share in their lives and stories.

quit his job as artistic director of a successful UK regional touring theatre company last year, sold his house, his car, and, in pursuit of a different kind of adventure, traveled to India and Sri Lanka for six months, engaging in several development projects. Mark is currently writing a book about his experiences.

Vijaywada is a large, busy city in Andhra Pradesh known as the gateway between north and south India. Not many Westerners get this far, so volunteers are often the center of attention.

People will notice you, stare and want to talk! It is not a difficult city to get to; the large railway station is the hub for many lines between Delhi in the north and Chennai further south.

Vijayawada has its own domestic airport into which you can fly from Hyderabad (the state capital) which also has an international terminal.SKCV (Street Kids’ Community Villages) offers accommodation (for a relatively low price) in the center of the city or there are numerous hotels and guest houses.

You may have meals with the project and there are plenty of good restaurants, cafes and food stalls in the city. You can buy the most basic provisions, toiletries, etc in the stores; there is little need to take much at all. Volunteers are expected to self-manage and completely buy into the ethos of the project.

Please note that SKCV cannot accept volunteers during the monsoon (April to October) months. The climate for the rest of the year is usually dry and warm.
SKCV has a very comprehensive website with plenty of useful information on its ‘Hints for Volunteers page.