Camel Safari in the Thar Desert

Rajasthan Romping: A Camel Safari in the Thar Desert 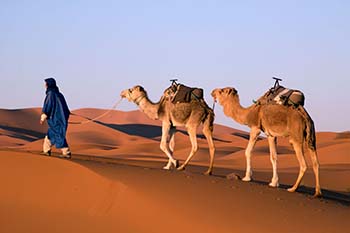 To get to my camel safari in the Thar Desert, I had driven from Jodhpur some 300 kilometers through the Indian state of Rajasthan along the ancient silk and opium route.

The dusty monotony of the trip had been interrupted only by a couple of near misses with careening truck-racing devils and the occasional buzz of an Indian Air Force jet–presumably patrolling the nearby Pakistani border.

A jagged speck appeared on the flat horizon and slowly swelled into a medieval walled city crowned by a massive hilltop fort.

Known as the Golden City, once-prosperous Jaisalmer unravels in a riot of lacy, carved wood and sandstone havelis (mansions) and temples, interspersed with simpler painted shops and houses. These spill their lively secrets into the narrow streets where, like scenes from Brueghel, residents seem to conduct most of their business–commercial and domestic–except the women are sari-clad and the livestock bedecked. Even the local camels wear beads.

My camel sported purple on the morning of the safari. It was a Jaisalmer gelding, famed for speed and durability, and seemed nice enough, sitting quietly as I mounted. But as I pulled up on the reins to get started, it let out an unearthly holler and flailed its long wooly neck, wild-eyed.

Taken aback, my instinct was to find another mount, but Mahmud, my guide, assured me all was well and we loped off through the Amar Sagar Pol (gate) and past the surrounding hard-baked mud huts that gradually dissolve into the desert. The scruffy tag-along children made me feel like some grotesque mounted “memsahib” as Mahmud led me on foot. It was better once he joined me on the double saddle.

Riding a camel is not like riding a horse. Camels move like undulant, double pogo sticks. Posting does not ease the slap of thigh against saddle–lightly padded wood, in this case–and sitting low does not help in a trot. I reconciled myself to the bruising study.

There would be plenty of practice riding into the Thar. After an hour or so, we stopped at Bada Bagh, a pleasure garden built in the 16th century, fed by a stone reservoir with an underground drainage system. The garden was dry in January, but the surrounding hills bloomed with a royal graveyard of sorts; carved chataris–elaborate stone canopies which shelter the cenotaphs memorializing Jaisalmer’s past rulers and their Maharanis and concubines.

Many of these later became sati by throwing themselves (or being thrown) onto the funeral pyre when their lover or husband died. A practice still common in Rajasthan, though it is officially banned.

We saw more chataris and oases along the route to Ram Kunda, a remote Hindu temple where Mahmud unpacked a delicious picnic lunch. I sat on a soft mat to eat, shaded like the Buddha under the tangled shag of a Bodhi tree, and the serenity almost swept me into a nap. Even my camel looked peaceful and I dared to stroke its neck. It tried to bite me then belched up something foul.

I remounted anyway, and we headed toward camp. It may have been my awareness evolving, but the changing light of late afternoon seemed to arouse new desert life. Plants took on subtle variations in color and texture, and in the stillness, I heard scrub birds rustle and saw furry legs skitter across the blushing sand.

Camp was ready when we arrived, tents pitched like harlequins huddling in the dunes, piled high inside with blankets. The temperature had started to drop–it would dip below freezing at night–but the sand was still warm. Hot tea and chapatis were laid out by a fire, and I watched the sun slip away while three cooks prepared a lavish meal. The day ended under the stars, so numerous they tinseled the sky.

Heading back to Jaisalmer the next morning, we stopped at Roopsi, an old desert village, where my camel spat when I dismounted to inspect the decorative clay painting of the mud huts. Then, at Amar Sagar, site of a finely carved Jain temple, the irascible beast tried to shake me off. This plainly amused Mahmud, but he remained diplomatic.

My camel began to pick up speed and flare its nostrils as we neared the city at midday, no doubt as eager as I to part ways. I hobbled back to my hotel through the frenzied, colorful whirl of Jaisalmer commerce, fanned by the famous locally embroidered textiles.

Late in the afternoon, I took an auto-rickshaw to the nearby crumbling chataris that serve as lookout point. There I watched the sunset turn Jaisalmer into the Golden City while an old man scraped long melodies from his four-stringed sarangi. As the Arabian sounds slithered through the air, I shook the sand from my hair and smiled back at the desert. Maybe my camel and I never bonded, but the Thar Desert of Rajasthan had stolen my heart.

I booked my camel safari and hotels in Jaisalmer through Forts & Palaces Tours, LTD., an Indian company specializing in custom tours through Rajasthan with branch offices all over the region. The friendly Mr. B.M. Singh is the tour manager in Jaisalmer.

For the safari, all meals, camping arrangements, a private guide (who was friendly and knowledgeable), tourist literature, and the camel were provided for $77/day. I sent a 10 percent deposit four months in advance, then paid the balance in Jaisalmer.

Hotel Jaisal Castle
Tel: 91-02992-52362
Fax: 91-02992-5210
Located inside the fort itself, the hotel has 11 charming, eclectic, air-conditioned rooms, some of them with small balconies and views across the desert, all of them with hot water and private bath. The hotel also has a vegetarian restaurant serving three meals a day.

A converted caravanserai with a splendid view of the fort, the hotel’s grand, carved sandstone exterior contrasts with its plain but comfortable rooms. It has 43 rooms with air conditioning and a private bath with hot water, two restaurants, a bar, and an elaborate indoor/outdoor, largely ornamental dipping pool (very mucky in January).

Folk singers, dancers, and puppeteers perform at night in the first inner courtyard.