Situated between Utah’s more popular (and crowded) national parks, this unusual state park, and the nearby Little Wild Horse Slot Canyon offer fun and adventure for young and old alike.

We visited in October, a great time of year when the air is warm, and the sunny skies are bright blue. We were so enchanted by the area that we stayed for a week.

On the approach to Goblin Valley, a huge rock formation thrusts up out of the surrounding flat plains, dominating the horizon.  As broad and tall as a downtown city block, it resembles the buttressed base of a massive gothic cathedral.

To one side three “goblins” stand together like greeters, welcoming visitors. Utah has created a lovely state park here, tucking the campground into the embrace of the mammoth rock formation’s rust-colored flanks.

We explored the steep walls and crevices of this seeming monolith and discovered that the entire formation is like a child’s sand dribble castle at the beach. The sandstone is literally dripping away as it erodes.

What seems like an impenetrable fortress from a distance is actually delicate to the touch. The sandstone sounds hollow when you tap it, and it breaks off in your hand if you are too forceful.

The campground offers spacious sites with terrific views for RVs (no hookups) as well as cozy tent sites hidden among the rocks where you can commune with the sandstone and have complete privacy. Each site has a shade ramada for the picnic table, and there are flush toilets, showers, and an RV dump. Bring plenty of provisions because the nearest grocery store is 20 miles away.

Entrada Hike to the Goblins

The mile-long Entrada hiking trail goes from the campground to the heart of the Valley of the Goblins, and on the way, it weaves through a maze of sandstone.

The walls of this maze are just high enough to obscure the view of where you are headed and is narrow enough to make you feel like a mouse scampering along the trail.

The route doubles back on itself many times and passes lots of domes and small hills. As we approached the valley and saw the fully formed goblins in the distance we realized that these nearby domes were actually goblins-in-the making: some domes are partially eroded, revealing the craggy, lumpy beginnings of goblins underneath.

When the path opens onto the valley you can’t help but feel childlike awe at the scene laid out before you. The basin is filled with funny shaped red rock formations, each standing about 10 to 15 feet tall.  Scanning the valley floor, nature’s whimsy is apparent.

There are red rock mushrooms, spaceships, birds, sea turtles, and a myriad of other shapes all strewn about. The far side of the valley is bounded by cathedral buttresses that match the imposing structure at the campground.

As we stood amid these crazy creatures, we felt we could have been on another planet. A young boy flew past me, running as fast as he could down the hill to the goblins.

“This is heaven!” he yelled, scrambling up a goblin in front of me. His younger brother wasn’t far behind, but it was clear who was king of the castle and who was the dirty rascal.

It is fantastic that the park allows visitors to climb on the formations. They even encourage it. Kids everywhere were having a ball on nature’s enormous jungle gym.

Other visitors find an ethereal, almost spiritual beauty in this rare jewel of nature. While we were there a trio standing on a nearby goblin suddenly broke into song.

They were Fundamentalist Latter-Day Saints, the two women in long dresses and bonnets and the man in suspenders. Their traditional hymns sounded reverent and pure and gave the valley a moment of solemnity and majesty.

Back at the campground, a group from a nearby college was on a field trip. The professor in charge roused the students (and the rest of the campground) every morning with a beautifully played trumpet solo that echoed and bounced off the rock walls with joy.

The visitors center has some terrific displays that describe the flora and fauna of the area as well as the geological and human history. We learned that the erosion process at work in Goblin Valley is identical to the one at nearby Arches National Park, but results in different rock formations.

The park offers seasonal talks in the campground amphitheater and ranger-led hikes of the valley, all at no charge. The full moon hike through the goblins would have been exciting, but we had perfect moonless nights during our stay instead.

The sky was blanketed with more stars than I have ever seen, seemingly braced against the black sky by the thick white band of the Milky Way as it reached from one horizon to the other.

Goblin Valley is located near a gorgeous slot canyon, and on another day we took the nine-mile Little Wild Horse Canyon / Bell Canyon Loop hike.

You have to watch the weather closely before venturing into slot canyons, as they fill with water in a heartbeat when it rains.  For a few days after a rainstorm, the slot may be knee-deep (or deeper) in water. The rangers at Goblin Valley offer daily reports on the status of the water in the nearby slot canyons.

We had a perfect day for our trek and we both were grinning as the canyon narrowed to a slot around us. For an hour we hiked between towering walls that stretched a hundred feet to the sky above while we placed one foot carefully before the other.

We were often able to reach out our hands and touch the walls on either side of us. In places, the gravel track was only one hiking boot wide. It sounds like it might be scary, but the walls rarely close in around you completely.  Most of the time there is ample room to sit on a ledge apart from other hikers and run your hands over the many sandstone shapes and textures that fill the canyon.

Sharing the Canyon, Then and Now

The walls have been eroded by water, so they follow rounded contours. There are deep pockets where eddies of water swirled and washed away the rock, forming little shelves. In some spots previous visitors have done some home-decorating, collecting pretty rocks and placing them on these knick-knack shelves.

Looking at that modern — and probably female — inclination to decorate these canyon walls, I couldn’t help but wonder how the ancient peoples would have used these canyons.

This part of Utah boasts many petroglyphs and pictographs dating back two thousand to ten thousand years, offering lots of evidence that others have come before us.

The rock is grippy, so in those places where we had to hoist ourselves up and over various blockages, it was easy to get a handhold or foothold. Some of the other hikers turned back, but we forged on until the towering walls on either side of us gave way and opened up to a wide plain filled with yellow desert scrub bushes and cottonwood trees.

After a few hours of hiking along open vistas, the trail turned towards Bell Canyon. Its sheer walls shrank around us into another slot and the grins came to our faces once again. We were seasoned slot canyon hikers now, and we traipsed through this second slot easily, going up and over, around and about.

We encountered hikers traveling in the opposite direction, but we were glad of our choice to go through Little Wild Horse Canyon first, as it is the more dramatic of the two (and is narrower and cooler). The beauty of this hike for kids is that you can get into the slot quickly at Little Wild Horse Canyon, and if their energy or interest fades, you can turn back and have just a short walk to the car.

Utah boasts some of the most breathtaking scenery in the US and has numerous beloved national parks.  However, Goblin Valley State Park is less visited, more remote, and just as stunning: a gem that should not be overlooked. 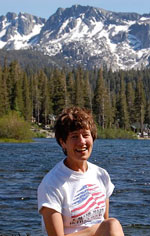 Emily Fagan is a freelance writer and photographer who lives fulltime in an RV. Follow her travels on her website:roadslesstraveled.us