When my 12-year-old son and I ventured to Poland for two weeks of exploring, one of the most impressive sights for us—both the buildings and the people we met—was Krakow’s Old Town Square.

Hollywood couldn’t have done a better job of creating a perfect scene: After passing Wawel Castle and making our way up Grodzka, the cobblestone pedestrian street filled with churches and shops, milk bars and pubs, we came to Old Town Main Market Square.

The violin music from Grodzka was overtaken by a six-piece jazz ensemble in front of St. Wojciech—a Romanesque church predating the square itself—with a small crowd of people listening and dancing.

The top-hat and tails driver of the first of a dozen horse-drawn carriages, with a family in tow, left the front of the taxi cue, passing before us. A man with two long sticks connected with webbing waved hundreds of bubbles with each swipe, children jumping and popping and giggling all around him.

Street vendors sold ice cream and fresh-baked pretzels that tasked a lot like hot bagels. Street performers dressed as statues, robots, and Santas and came alive when coins were tossed into their cups.

Alex got a kick out of the Reaper-like statue that startled people as they walked by.

Like most European squares, the liveliness was boxed in with ornate buildings: shops, cafes, restaurants, museums, and apartments with lovely façades.

Scattered on the doorsteps of cafes, tables where people ate pierogis and drank beer under umbrellas, many sporting their own small jazz ensembles or violinists.

At the center of the square stood the Cloth Hall, restored in the late 1800s and originating back to the 1300s. Inside the long hall, where vendors used to sell silks and linens, kiosks now sell souvenirs.

Beneath the Cloth Hall, we enjoyed the Rynek Underground: a museum dedicated to the history of the city, displaying layer after layer of cobblestone street after rubbish pile after cobblestone street through the centuries like a layer cake.

The upstairs level of the Cloth Hall features the National Museum’s Gallery of Polish Painting, including masterworks by Jan Matejko—frosting on the layer cake.

Beside the Cloth Hall is the Gothic City Hall Tower—the only remaining part of the 14th century City Hall that was partially burned down in student revolts. Krakow’s own leaning tower tilts due to a strong wind in the 1700s that gave it a slight nudge.

We could and did. Historical displays decorate the 100-step climb, but the real payoff is the bird’s eye view from the top level.

I pointed at the twin towers across the square. “We’ll go there next.” It was getting close to 11 a.m., and that meant it was time to visit St. Mary.

Krakow’s Old Town (and the square at its center) has its share of impressive churches: the Dominican Church with its Mannerist and Baroque chapels, the Franciscan Church with its striking stained-glass windows, the Romanesque St. Wojciech, one of the oldest in Poland. But the most imposing is the Church of St. Mary, its twin towers overlooking the square from its northeast corner.

St. Mary’s twin towers appear to be mirror images until you look at the top, where they dramatically change. One tower is taller than the other, and their crowns and spires are quite different.

Legend has it that two brothers were each responsible for one tower. To ensure his tower was the best, one brother killed the other before construction was complete.

He couldn’t live with the guilt, so he took his own life using the very same knife. That knife (or a replica of it) hangs across the square in a doorway of the Cloth Hall, facing the towers.

The church is even more awe-inspiring inside than out. With blue painted ceilings and gold decorations throughout, the church is filled with tombs and carvings, crucifixes and statuary.

But the most impressive and expensive piece in the church is the Altarpiece of Viet Stoss. We arrived just in time for the ceremonial opening of the altarpiece at 11 a.m.

To the sound of reverend music, hundreds of people looked on as a nun used a pole to slowly open one side of the world’s largest Gothic altarpiece, then the other, slowly revealing that the artwork on the inside was even more dazzling than that on the outside.

She moved silently, as though in prayer or deep meditation, as she revealed the detailed wood carvings of scenes from the lives of Mary and Jesus—slathered with gold and colorful paints—to the masses.

We had plenty of time to admire the altarpiece, and the rest of the church, before heading back outside for St. Mary’s other popular draw.

Dating as far back as the 1300s by some accounts, Polish firefighters have been performing a Hejnal, or trumpet calls, from the tower of St. Mary. Every day, the trumpeting firefighter opens a window of the tallest tower and performs the five-note “St. Mary’s Dawn” or “Krakow Anthem.”

The noon performance—the one we witnessed—is broadcast live on Polish radio daily. As explained to us, rarely has an alternate song been performed; the last time was the day that Leonard Cohen died, when the firefighters performed “Hallelujah.”

As Alex, my 12-year-old son, and I explored Poland for a couple weeks, we had the opportunity to meet a lot of Polish people.

We talked to them at bus stops, in museum lines, at concerts, and in restaurants where we sometimes shared tables when it got crowded.

One thing we noticed was that most Poles who remember the days of Soviet occupation remembered suffering under the boot of the Soviet Union.

Piotr, a customer we met a few times at Pierogarnia Krakowiacy, a little pierogi shop off Krakow’s Old Town Square, was no exception.

During a crowded visit to the local eating spot, we shared a table with Piotr.

He welcomed the opportunity to practice his English with us. Piotr measured the difference between now and the Soviet occupation in LEGO bricks.

“I remember when I was a young child,” he said between bites of steaming pierogi. “Every year for my birthday, I asked for LEGOs. But western toys were expensive, and my family couldn’t afford them.”

“I love LEGOs,” Alex said, not mentioning that the size of his own collection could likely have satisfied half the children of Krakow in the early 1980s.

Piotr smiled at Alex. “I did too, and my parents and grandparents knew it. So they saved a little bit from every paycheck, when they could. And after four years of saving, they were able to take me to a toy store and let me pick out a very small LEGO set.

Every day at noon, a Polish firefighter bugler plays “St. Mary’s Dawn” or “Krakow Anthem” from the gothic towers of the Church of St. Mary’s. Tourists flock to listen, but Piotr remembered a time when it was for locals rather than tourists. I found it interesting (and understandable), this nostalgia for and bitterness toward that occupied childhood.

“That toy would be, maybe, $15 in today’s dollars. But it was my childhood treasure, and I still have it today.”

“That’s really cool,” I said, wondering how few of my own childhood toys may still be hiding in the attic.

“But today, I work at a job not even as good as my father’s. And every year, I can take my son to a LEGO store and tell him, pick out any LEGO set you want. $500 Death Star, no problem. Ninjago City, go ahead. I’ll even buy you the Taj Mahal or pyramids of Egypt.”

Alex brightened. “I have a lot of LEGOs. But even I don’t have those.”

“Maybe I’m crazy,” Piotr said, sopping up sour cream with his last pirogi, “but it brings me pride to be able to give my son what I couldn’t have as a child. And the sacrifice? Not nearly that of my parents’ to give me my one tiny firehouse. That is the difference between a free society and Soviet occupation.”

One of the great things about traveling abroad is that it gives you perspective. Alex has always loved his LEGOs. When we returned home, I could see him approaching his collection with a new appreciation for how fortunate he is to live in good times.

All the same, he has already asked when we can return to Poland for another visit; for another taste of pirogis, another walk around Krakow’s Old Town square with the bugles playing.

Maybe even a stop into a LEGO shop in search of a retro firehouse.

Whichever route or combination you choose, be sure to consider the reviews along with location and price. Paying a little more to be in the center of the places you want to visit ends up saving time and money.

In Krakow, we stayed in Agnieszka’s Kazimierz apartment, central and cozy. Two beds, a living room, eat-in kitchen, and a memory wall where Alex and I left our impressions of the city in marker. In the heart of the Kazimierz neighborhood, it was a 10-minute walk from Wawel and Old Town. 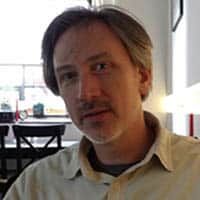 Eric D. Goodman enjoys travel as much as he does writing. He’s author of six books. His most recent, Wrecks and Ruins, takes place in Lithuania, Vegas, and Baltimore. His thriller, The Color of Jadeite, takes place in locations across China. More than 100 of his articles, travel stories, and short fiction have been published in print and online magazines, newsletters, and journals. Learn more at www.EricDGoodman.com.