There is a new tail fin in the Dallas market. Finnair recently launched its inaugural flight from DFW to Helsinki.  It’s never been easier to visit Finland than now.

I was one of the lucky passengers on that inaugural flight, winging my way to Helsinki in the Airbus 350 aircraft featuring the new long-haul experience.

Heidi Lemmetyinen, Finnair Communications commented. “We are very pleased with the reception of our updated cabin experience, and we are confident that the travelers in the DFW region will enjoy it as well when they fly to Europe with Finnair.”

The route offers more flight options and convenient connections, giving North Texans new ways to travel worldwide. It provides a shortcut to Europe with its 4x weekly service in both directions and smooth connections to more than 100 destinations in Europe via Helsinki.

Caroline Borawski, General Manager, North America at Finnair said, “As a result of COVID, there were a lot of setbacks in this industry. We all felt the pain of Covid. But it really allowed us to take a step back and reassess what our business looks like and how we meet the demands of our customers.

So, as a result, we here in North America had the great pleasure of adding many new routes.   It was an opportunity for us to say, okay, let’s put on our creative thinking cap. What can we do with this opportunity? It’s making lemonade out of lemons that we’ve been given.”

Finnair is one of the world’s oldest operating airlines. Since it was founded over 90 years ago, the company has grown from a small airline to a solid and respected member of the international airline industry. The first planes were seaplanes; they used skis in winter and floats in summer. At the time, there were no commercial airfields on land in Finland. During its first year, it carried a total of 269 passengers. 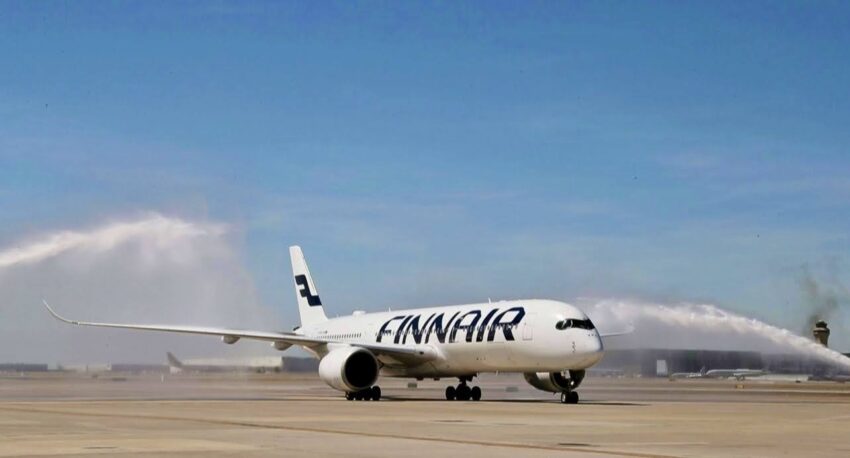 As a member of the One-World Alliance, Finnair specializes in connecting passengers between Asia and Europe via the short northern route. Sustainability is at the heart of everything they do—they intend to reduce its net emissions by 50% by the end of 2025 and achieve carbon neutrality by 2045.

The state-of-the-art Airbus A350 is one of the sleekest and most elegant planes in the sky. It is also eco-friendly, with 25% better fuel efficiency than other current-generation aircraft. Representing the flagship of the airline’s fleet, it features low emissions and maximum comfort. For the techies out there, it is 66.9 meters (just over 219 feet) long with a wingspan of 64.8 meters (about 212 feet).

The cruising speed is 560 miles/hour with a maximum altitude of 13,100 meters (8 miles high). The Helsinki/Dallas flight traverses 5,224 miles in each direction and is clocked at 10 hours, 50 minutes westbound, and 35 minutes faster eastbound.

Self-professed aviation geek Andy Luten of andystravelblog.com, is a seasoned aviation spotter and photographer. Knowing the Finnair flight was coming to land at DFW Airport to begin their nonstop route between the Finnish Capital and North Texas—he headed to Founder’s Plaza to catch the action.

Andy generously shared some of his great shots with me, even getting some close-ups from the DFW tarmac.   Andy says, “there’s nothing quite like riding around in an airport operations vehicle for an avgeek like me.”

In a time-honored tradition, the Finnair A350 received a water salute on the DFW tarmac.  This welcoming ritual is also known as a shower of affection.  Two fire engines parked on either side of the runway use their water cannons to create a giant arc above the plane as it taxis to its gate.

The ribbon-cutting ceremony at the gate celebrated Finnair’s presence here at DFW Airport with special guest Mikko Hautala, the Finnish Ambassador to the United States.

The revamped premium cabins on its long-haul planes bring a Nordic coziness to the sky, celebrating Finnish design. “The new Premium Economy Cabin was added to better meet the needs of our customers,” Caroline Borawski continued. Tiina Tissari, Finnair’s VP of customer experience and products, added,

“The business class is totally re-imaged with maximum personal space enhanced by the brand-new fixed shell seatback—allowing customers to make the space their own during a relaxing long-haul flight.

This is done in Finnair’s unique design language, manifesting the Nordic simplicity and modern luxury. And while almost everything is renewed, some things will stay the same— including the iconic Ultima Thule champagne glass introduced back in 1969.”

Iittala, the Finnish glassware company, created the glassware for Finnair to reflect the ice in Finland’s northern Lapland.

Kippis! I’ll toast to that!

The airplane design has that special Nordic touch, from the streamlined finishes to the cushy pillows and blankets by Marimekko, and don’t forget their signature blueberry juice.

But here’s my word of warning. Once you get upgraded to a premium cabin, you are spoiled forever.

My favorite thing about the flight was all the little details. I felt wrapped in comfort and coziness. The unique aurora borealis-inspired mood lighting was just a preview of the real deal I saw in Lapland a few days later.

If Finland is on your bucket list, flying with Finnair is a fantastic way to start your visit!