How do you go about unpacking Istanbul, a city of 15.7 million people stretched across two continents, when you’re hoping to find the heart and soul of this city?

My answer was to join a food tour on my first full day in Istanbul. Based on previous international food tours, the guides have been very knowledgeable about food and the region’s history and habits.

I figured this would help familiarize me with the city, and then I could work out a feasible plan for exploring on my own.

Along with my traveling partner, Terri, we booked “A Taste of Two Continents” Food Tour through Viator. Their online description said, “Be sure to come hungry. You have a day of feasting ahead of you.”

They weren’t kidding. By the end of the day, I wished I had worn a pair of pants with an elasticized waistband.

We met our very spirited and knowledgeable guide, Ayse Uram, in Istanbul’s old city on the European side. We were joined by three other engaging couples, all of us in the mood to eat.

Ayse led us to the crowded spice market, where we would pick up items for our traditional Turkish kahvalti  (breakfast).

As we walked, Ayse explained that for Turks, breakfast is the most important meal of the day where families gather over a sizable amount of food.

At the market, she picked up three types of cheese (cow, goat, and sheep), an assortment of olives, pastrami, spiced beef sausage, and simit (sesame bread rings).

We headed to a tiny tea house with the breakfast goodies in hand and settled in at an outside table covered in newspaper, which I guessed to be a disposable tablecloth.

Ayse was great about sharing tidbits of her native country, such as 60% of the world’s hazelnut supply comes from Turkey.

The rich and luscious clotted cream was a hit with our group, to which our charming guide chuckled as she said, “Taste on the lips, lifetime on the hips.”

The Lowdown on Tea

I had always assumed that China holds the lead on tea drinking, but it turns out that Turkey is the world leader in tea consumption.

The traditional black tea, or Cay, is served in small tulip-shaped clear glasses throughout Turkey. Tea not only happens with every meal, but any shopkeeper trying to get your business magically appears with tea, hoping to make a sell.

A word of warning about the tea.  Those dainty glasses can be very hot to the touch, making it tricky to hold onto them for very long.

After our substantial breakfast, we strolled over to the ferry for a pleasant ride across the Bosphorus to the Kadikoy area on Istanbul’s Asian side.

The atmosphere was markedly different, with a trendy, upbeat vibe.  It is especially popular with millennials, thanks to a rise in hip eateries, bars, shops, and nightlife.

At our second stop in a local restaurant, we were given a bowl of Beyran soup, a blend of lamb and rice in a very spicy lamb broth, served with crusty bread.

The soup is a cure for hangovers, according to Ayse. Did I mention we washed it down with black tea?

Next up was my favorite stop, Kebapçı Iskender, a renowned restaurant where we were introduced to the only item on the menu, Iskender Kebap.

There is a history to this place, founded by Iskender Iskenderoglu in 1867, claiming that his descendants first invented the kebap.

His grandsons now operate the restaurant. The kebap is doner meat (lamb) that has been seasoned, beaten, then skewered onto a vertical rotisserie. The doner is served on top of pita bread, served with a dressing of tomato sauce, a side of yogurt then drizzled with hot butter.

Accompanying our kebap was Sira, a sweet drink made from slightly fermented grape juice that supposedly aids in digestion. My taste buds demanded a second helping of kebap. Suffice it to say, I left the restaurant overly full.

Moving on, we wandered into a shop that featured all sorts of olives and pickled items, but I took a pass on samples being handed out, still digesting my kebap.

Our 5th tasting found us at Kiva Çiya Restaurant, whose claim to fame was being featured on the Netflix series, Chef’s Table. We had a spread of mezzes, defined as a series of small dishes akin to appetizers.

The restaurant prides itself on bringing back to life food that was part of the Ottoman Empire.

One of the dishes, Hünkar Beğendi (The Sultan’s Delight), was a mixture of braised lamb served over eggplant puree, reportedly a Sultan favorite back in the early 1600s.

Ayse revealed that eggplant finds its way into over 50 dishes in the Turkish culture. Also on the table was Turkey’s famous puff flatbread, called “lavas.

”The best I could manage was light nibbling at this point. Like the grape leaves on the table, I was stuffed. We finished up this tasting with tamarind sherbet.

We lagged behind our younger counterparts but pushed on, determined not to give up. Next up was the Tantuni, a Turkish taco made with sautéed beef, onion, and parsley shreds. 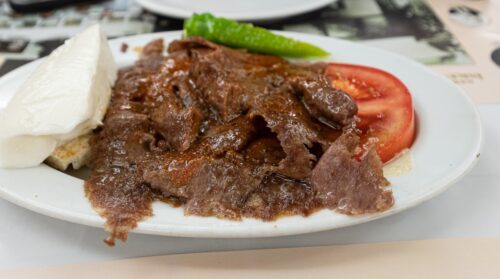 The next stop was my least favorite, where Kokorec, lamb intestines stuffed with sweetbreads was on the docket.

The idea of chewing on the innards of lamb just didn’t cut it for me. The plus to this stop was no tea was in sight. Instead, we were given Ayran, considered the national non-alcoholic drink of Turkey, consisting of natural yogurt, salt, and water, and served cold. 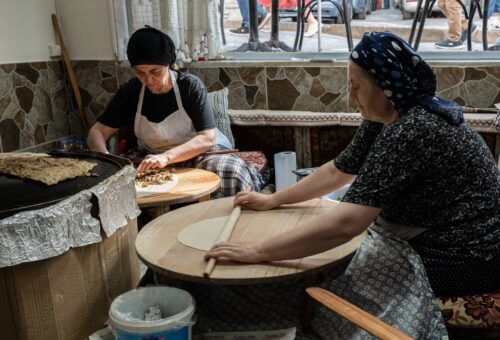 A small helping of Baklava and Turkish coffee in a sidewalk cafe was a welcome chance to sit for a spell.

Terri’s take on the coffee was, “It’s a bit gritty. You have to know when to stop drinking before you start drinking the ground coffee sludge at the bottom.”

The Baklava was exquisite, with the pillows of dough exceptionally tender and flaky.

Our foodie tour concluded with Maraş Dondurma, an ice cream made with milk, sugar, Salep (ground-up roots of orchids), and Mastic, a tree resin that gives the ice cream an elastic texture.

No offense to the Turks, but I’ll have to stick with Häagen-Dazs.

An A+ Day in Istanbul

At this point, Ayse walked us to the ferry terminal where we bid the group goodbye, then boarded the ferry for the ride back across the Bosphorus to our hotel on the European side.

No question, our stomachs hurt from overeating, but the food, our fellow travelers, the weather, and our guide made me rate this experience an A+.

We had logged in 7.8 miles on our outing, so hopefully, we burned a few calories from all we consumed.

Back at the hotel, we plopped on our beds, unbuttoned our jeans, and moaned over that uncomfortable feeling of having eaten too much.