The Wilds: Ohio’s Only Wildlife Safari 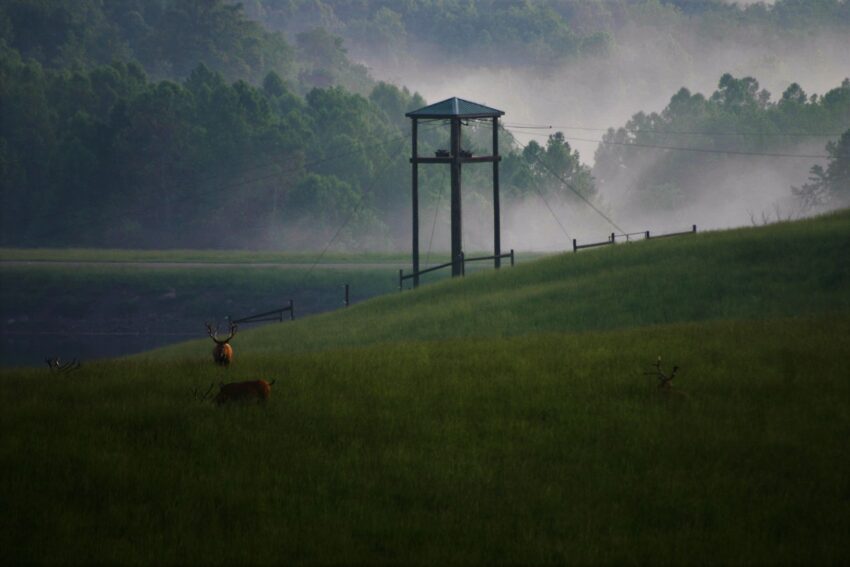 My sister, Kimberly, and I were driving from New England to Louisville, Kentucky to help her son move. Driving through Ohio on Highway 71 we saw a brown sign– the type that indicates a state or national park, or other visit-worthy sites— in Ohio that read “The Wilds.”

Always on the lookout for our next adventure, we decided ‘The Wilds’ was worth a Google. 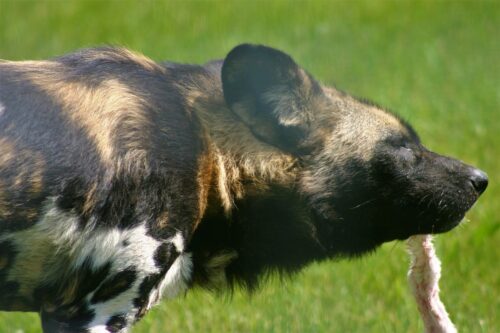 “Whoa, listen to this. It’s a ten-thousand-acre wildlife preserve in Cumberland,” I read, “And you can stay overnight in a yurt!”

I realize that to some people this is not an exciting revelation, but for us, it was cause for hysteria.

We called immediately and booked a yurt for a night on our return trip.

Several days later we were driving up the dirt road in The Wilds following signs for Nomad Ridge.

Tucked beneath a wreath of wisteria was the first of a dozen or so yurts on the property. It was the reception area.

We were greeted kindly, checked in, and were escorted down a serpentine of steps to our own yurt complete with a deck overlooking expansive rolling hills and a pair of ponds.

Nestled on a hillside in a grove of deciduous trees it felt like a treehouse. As soon as our host left, we looked at each other and said, “Ok, this is too cool… we have to stay a second night.”

Included in our stay were a safari tour as well as dinner and breakfast for two. We put our things away quickly and walked to the more public side of the park for our tour.

Once loaded up, we started with a drive through the Sally-port gate system – think Jurassic Park in our open-sided bus.

We quickly encountered a herd of burping, grunting Pere Armande David’s deer. The males cover their antlers with as much algae, debris, mud, grass, and dirt as they can, and together with the belching, an ‘irresistible’ cologne is created for their mating ritual.

A fine and appealing scent for some it seems. This herd is a direct descendant of the Chinese Emperor. During the Boxer Rebellion, the emperor’s deer were wiped out as soldiers pilfered from his royal forest to feed themselves.

The only reason the deer survive today is that, prior to the rebellion, a Frenchman named Armande David had asked the emperor if he could bring some of his deer back to Europe with him.

The herd of two hundred that the emperor gave Pere David is the direct ancestor to those at The Wilds today. 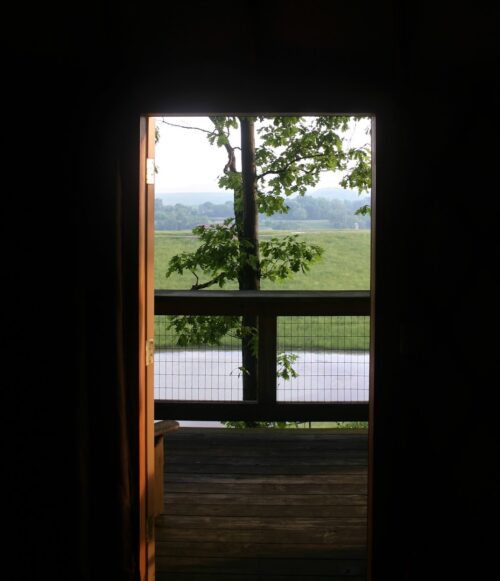 Revolutionary Concept for the 1970s

As we listened and learned Kimberly and I couldn’t help but wonder how it was that we had never heard of this ‘state-side Safari’ before.

The seed of this idea sprouted in the late 1970s when politicians, the Ohio Department of Natural Resource and Development, the Ohio zoos (there are nearly a half a dozen) and the private sector explored concepts for supporting cultural tourism through the preservation of wildlife.

A Myriad of Animals

Our safari bus brought us up close and personal with ghosts of the desert (Persian Onagers) and Southern White Rhinos, Grevy’s Zebras and Bactrian Camels. There are as many as fifty species roaming free.

At the time of our visit, eleven of them are endangered; their risk of extinction is high.

Many species have become extinct in the wild, but here they work collaboratively with zoos to breed or artificially inseminate those endangered to replenish the numbers.

Their success is admirable. Some, like Przewalski’s Wild Horses, have already been reintroduced into the wild.

Conserving Carnivores at The Wilds

We continued through more Sally-port gates and on to the Carnivore Conservation Center. It is good to know that the seven miles of fence-line are walked and inspected once a week. Cheetahs, a Dhole, and African Painted Dogs are misleading in their appearance looking downright approachable. 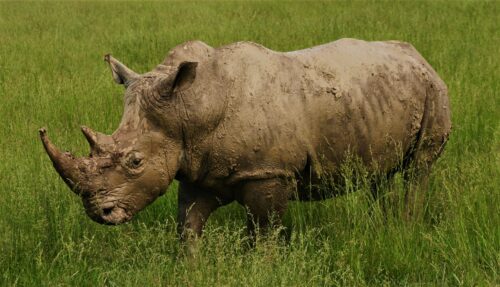 But as we watched the supplemental feeding of whole animal parts getting ripped to shreds, we rethought our impression of their cuddliness.

The African Painted Dog, we were told, is extremely aggressive and an incredible relay hunter. Their hunting success rate for prey ten times their own body weight is eighty to ninety percent.

On the flip side, they bring back their kills and feed the young, injured, old and ill before partaking themselves. Such a civilized social structure.

In all the tour took about two and a half hours. Ostrich pecked at the sides of the bus, a Red-Crowned Crane tended to its egg, rhinos wallowed in mud, and contented Eland and Antelope grazed. 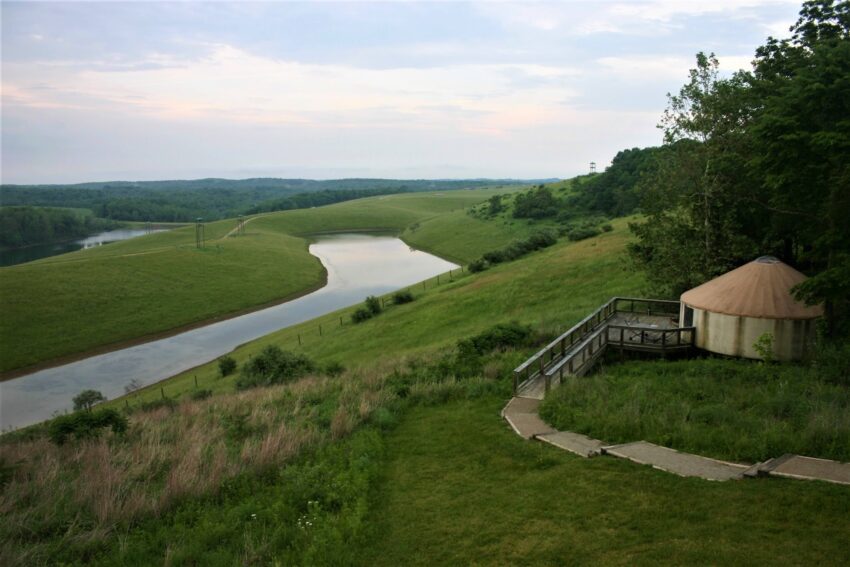 As guests of Nomad Ridge, we received a significant discount on other tours; zipline, horseback, fishing, sunset, or Wildside.

We just could not pass up the opportunity to get even closer to the animals and potentially feed some of them on the Wildside tour.

We were giddy and oozing with excitement from both what we’d seen and what we had to look forward to the following day. 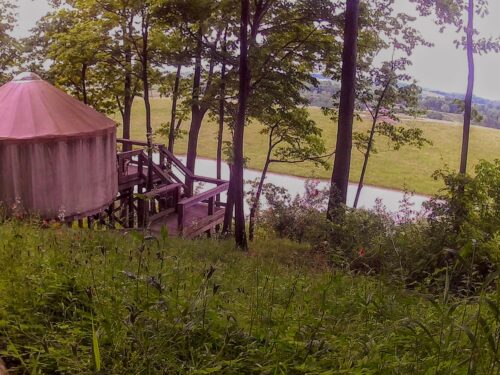 After dinner, which was plated and incredibly good, we walked down the hill to our yurt.

We listened from our treehouse deck to the sounds of animals and night falling. But for a few other guests, the park was empty.

The intimacy with the park after hours from our private abode was spellbinding.

We continued to wonder how we hadn’t known about this place, about our good fortune in stumbling across it and how soon we could return.

A place of this magnitude with this degree of thoughtful planning takes time and, though the idea sprang up in the 70s, it didn’t open until 1994.

In 1984 the Central Ohio Coal Company, a subsidiary of American Electric Power, donated over nine thousand acres to the then newly designated 501(c)(3) organization; the International Center for the Preservation of Wild Animals, Inc.

The land had been surface mined for decades. The 1971 Federal Reclamation Act required mining outfits to replace a minimum of six to eight inches of topsoil, re-contour, and control erosion which explains why undulating hills and ponds grace the land today.

We awoke to fog lifting through the hills and trees and grasses, Pere David’s deer below us stirring by the pond.

At 8 a.m. we climbed aboard our Wildside jeep along with a half dozen other eager guests and passed through the Sally-port gates.

We met the little-studied Sichuan Takin who had stumped the animal management staff on their arrival. After the Takin’s first night in their lakeside enclosure, the staff was unable to locate them.

They found them later, on the other side of the pond; it was not known at the time that Takin could swim.

We drove through a field, passed the zebras and antelope. Lingered by the rhinos as they investigated the jeep. They were close enough to touch. I desperately wanted to but was advised against it. Pff. 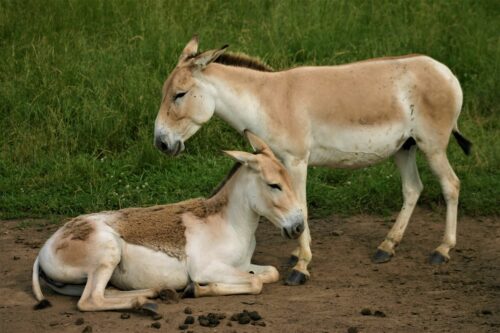 A little further on a reticulated giraffe sauntered up to the side of the jeep. Our guide handed each of us a few leaves of romaine lettuce.

The giraffe bent his head down into the jeep, extended his rough, black tongue, and wrapped it gently around the lettuce in my hand. Incredible.

We continued feeding and being awed by the giraffes for twenty minutes or so. They are fantastic, comedic, and gentle creatures.

We did one more open safari the following morning — each night we stayed included the same; meals and a tour.

There is always more to learn; each guide imparts his or her own bits and pieces, so no tour is ever the same. And the free-roaming animals are always up to something different.

The mission of The Wilds is to foster an appreciation for and mindfulness of nature, wildlife, and the ecology, and to advance its conservation through good stewardship. Inspiration for such abounds at every turn.

Sipping an Ohio Chardonnay which we purchased at the concierge desk, we sat on our deck overlooking thousands of acres. We watched as Pere David’s deer, silhouetted against the pinkening sky, socialized, and swam, drank, and grazed and belched.

Ready To Visit The Wilds?

The Wilds remains one of my all-time favorite adventures. That’s common, I think, when serendipity strikes. We explored only a small sampling of what The Wilds has to offer.

Live nearby? Have kids interested in wildlife conservation? Interested in training? Then check out these other offerings:

Overnight yurt accommodations range from $325-$425/night and include: Open-Air Safari tour for each guest.Dinner and breakfast for two.

Staff concierge is available 24 hours a day to assist you with your stay.

Complimentary Wi-Fi in all yurts.

WildNights at the Outpost: $650/night in a tent for up to 6 people

Spend the night in the middle of their pastures with giraffes, rhinos and other rare and incredible species nearby.

TIP: Guests who book a Monday, Tuesday, Wednesday, or Thursday evening stay will receive $100 off! Discount applied at check-out. Reservations are required for all tours. To book call 740-638-5030

Dogs and other pets are not allowed on the property. 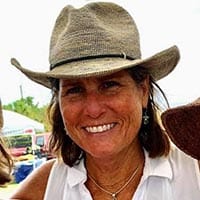 MaryLee Blackwell is a writer and photographer currently living in Wakefield, R.I. where she and her husband are converting a 2016 Sprinter van into a camper. Now that they’ve ‘encouraged’ the kids to fledge, she’ll be taking their two dogs and traveling the country at length.’