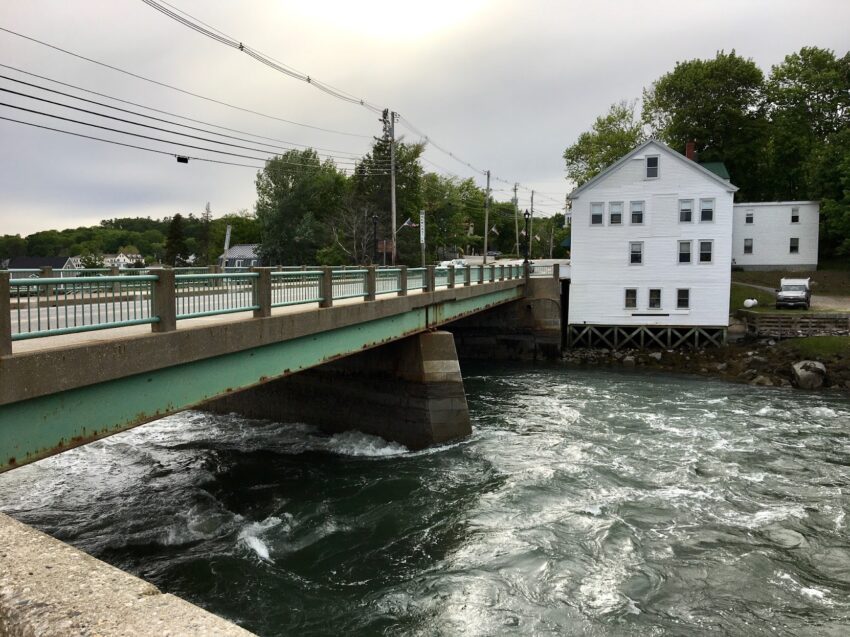 In Mid-Coast Maine, I ate breakfast with a water view–not an ocean view, but a river view. 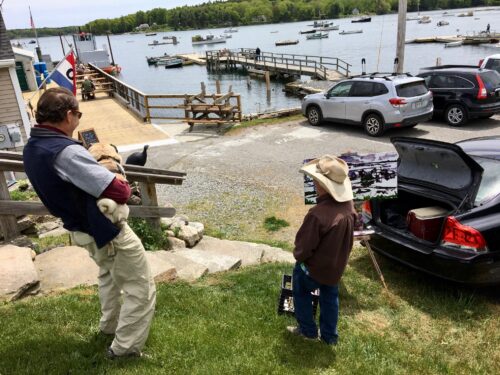 In late May I sat in the dining room of The Newcastle Inn with my husband overlooking the Damariscotta River.

It was about 8 AM and the temperature was a tad too cool for alfresco dining on the elevated deck, but from our table, the river was visible and so were the blooming rhododendron and dogwoods.

On the wall, an old B&W photo taken of the inn in the 1950s revealed that not much has changed in the 60 plus years since the image was snapped.

This is what I love most about Maine; time seemingly stands still. The three-story sea captain’s house was built in 1860 and has been an inn for what seems like forever.

Harley, the server, brought us fresh strawberries and blueberries with a dollop of crème Fraiche. A couple from Ohio were seated across from us—they were visiting to attend a wedding. Another couple, from San Juan, had been visiting for a week.

We were ready to explore Damariscotta which is known as Newcastle’s “Twin Village.” The Damariscotta-Newcastle Bridge which separates the shellfish-crazy villages is a mere half-mile away. But first, we meandered down the sloping property behind the inn to admire the blooming purple and white irises.

A small raised bed was prepped for planting. Julie, the innkeeper, will grow Red Pontiac potatoes for the first time. There are two side-by-side Adirondack chairs providing a peaceful view of the 19.0-mile-long tidal river that empties into the Atlantic Ocean.

It’s been said that Damariscotta is an old Abenaki word for “river of many fishes.” We sat down to soak up the serene setting. It’s a slice of Maine paradise and just the spot to kick back with a good book. 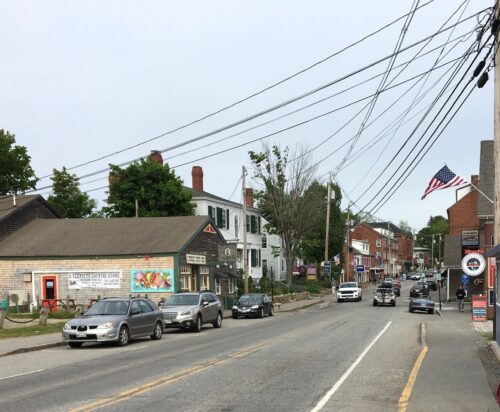 I turned left into Shuck Station, a converted brick gas station. It was noon and now T-shirt weather so we grabbed a seat outside under an umbrella and ordered two Oyster Po’Boy sandwiches.

It’s all about oysters in Damariscotta. Oysters thrived here over two thousand years ago, and massive shell heaps remain along the banks left by Native American tribes.

The oysters disappeared by the 1970s, but today, a handful of oyster farmers cultivate oysters on the river. The river yields 2 to 3 million oysters each year. 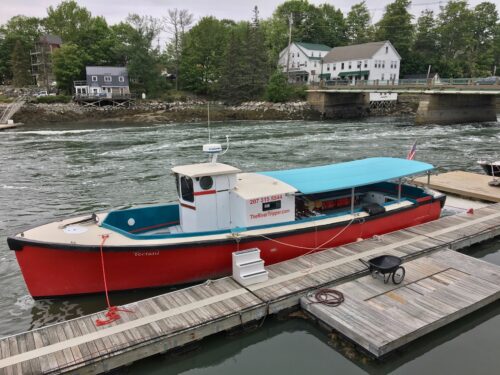 After a quick bite to eat, we drove across the bridge. I downshifted into second gear and crawled along Main Street. It was shoulder season so I was able to score a parking spot right in front of the Sherman’s Maine Coast Book Shop.

We stopped in, perused the shelves, and I purchased a Maine mystery novel.

A group of four walked by with ice cream cones. I looked to see Wicked Scoops on the corner and remembered back when they opened years ago. We stopped at the window and ordered Maine blueberry ice cream.

We walked toward the bridge and to The River House where I had dinner reservations for the following night.

It’s a small farm-to-table restaurant, and because seating is limited, reservations are recommended. I walked toward the back and see the small balcony just for two overlooking the river. This is the table I requested!

From this spot, I could see a red boat docked at Schooner Landing Restaurant & Marina. The vessel takes people on a two-hour oyster farming & seal-watching river cruise. I added it to my must-do list.

We drive out of town en route to Bristol and head to Round Pond, a tiny village formerly known as Pemaquid.

At Round Pond Coffee I turn right and drive down a lane, park and walk down a path with a slightly elevated view of the postcard-perfect anchorage. Sailboats on moorings dot the protected harbor.

We stop and chat with a local artist standing in front of an easel. His name is Matt and he tells us the inside scoop on Round Pond.

“See that catamaran out there, the owner was on it the other day and he capsized it when a sudden gust of wind came. The mainsheet was cleated and the boat flipped over.”

Matt continues with another entertaining story. On his easel is a salvaged piece of wood with an outline of the harbor. I see many finished canvas and driftwood paintings lined up at the entrance to a large lobster shack.

Matt says it’s the restaurant’s opening day. I peruse his assorted and affordable art and ask for his website address.

He says, “I don’t have one. I haven’t gone on the Internet in years.” He suggests that we drive to Pemaquid Point Lighthouse.

First, we check out the shack–Muscongus Lobster Bay Co. with a prime view of one of the prettiest harbors in the state. We know we’ll be back for dinner.

As we walk back to the car, a local stops to thank Matt for a painting he recently did for her. We pause on the path to take photos, she catches up to us, stops, and points.

“See that dock right there with the building at the end of it?” I look and wonder what is in the building. “That’s my dock and I lease it to two women, they have a business called Two Lobster Ladies.”

Local tips are sometimes the best. And I think to myself, it doesn’t matter that I’ve been coming to Maine my whole life, Mainers know I’m from “away.”

Back behind the wheel, we head about 6 miles SW to the lighthouse with a Fresnel lens. The 38-foot stone lighthouse was commissioned by John Quincy Adams in 1827. It’s located at the entrance of Muscongus Bay on an outcropping of stripped granite that extends into the ocean. It’s a must-see.

And a must-stop after climbing the tower is Saltwater Artist’s Gallery. It’s a co-op of local Maine artists selling everything from paintings to pottery, stained glass, and jewelry, among other crafts. We step in and bump into the Ohio couple from the inn.

The topic of lobster rolls pops up. We chat with the saleswoman about Red’s in Wiscasset and the long line that forms daily.

The market value of a lobster roll in Maine right now is $28.00. However, some places are a little less. Red’s is a crowd magnet so arrive early and with cash.

It’s about 6 PM. We head back to Muscongus Bay Lobster Co. for a light dinner. Matt and his paintings are long gone.

We order two lobsters at the window. They’re plucked from the tank in front of us. A friendly employee bee-lined toward our pug and asks us if he can give Coco a treat. He brings out a bag of homemade Bearded Gypsy dog biscuits. Coco does a trick and gobbles one up.

I bet a lot of dogs come to this lobster shack. We grab a picnic table, wait for our name to be called, and pick up the tray. The fun begins. We twist off the claws, crack them, and consume the tails dipped in drawn butter.

The sun dips, and it’s chilly again. It’s time to head back to the inn and flick on the switch to the gas stove.

A Cup of Joe 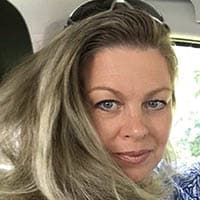 Susan Fogwell is a Philadelphia-based freelance writer. She worked in the airline industry for over 22 years. She is currently writing a book about Maine.