There are two ways one can avoid the crowds while enjoying a visit to Abu Simbel in Egypt – hop in a time machine, or go during a pandemic.

Monumental.  Amazing. Jaw-Dropping.  My first glimpse of the four colossal statues of the seated Ramses II stopped me in my tracks.

More than 70  feet high, the grand Temple’s front facade in Abu Simbel is one of Egypt’s most impressive sights.

And, just as Ramses II would have wanted — the Temple exuded the majesty and might of the most powerful Pharaoh Egypt has ever known.

Located in southern Egypt near the Sudanese border, a trip to Egypt would not be complete without visiting Abu Simbel.

Ramses II’s famous Temple stands like a mirage in the middle of the Nubian desert overlooking Lake Nasser.

Originally carved out of a mountain on the west bank of the Nile between 1274 and 1244 BC, this is one of the most famous temples in Egypt.

Crowds of visitors come to visit it daily – unless you come during the Pandemic when there is nary a tourist in sight.

Abu Simbel is considered one of the ancient Egyptian’s architectural miracles.

Even more impressive,  they have been relocated from their original site on the Nile to save it from being covered by Lake Nassar’s waters after building the Aswan High Dam.

Abu Simbel is among the most iconic UNESCO World Heritage sites on the planet.

Because tourism has so drastically diminished during these days of the COVID pandemic, I was able to meander throughout the ancient temples, with only a few other souls in sight.

Bird songs trilling and the rustle of the wind the only sounds, while the morning sun glinting on the waters of Lake Nassar.

Before the Pandemic, there were typically 2,000 visitors per day, sometimes waiting in long lines in the hot sun to enter the Grand Temple and jockeying for an unimpeded view to take photographs and selfies.

So you ask…just how did she manage to go to Egypt during these unprecedented times?

While armchair traveling on my computer in October, my planned trips dashed due to COVID, I was longing to assuage my wanderlust for faraway places.

I discovered Egypt had recently reopened its borders to American visitors without a quarantine period.

Americans in Egypt During Pandemic

Communicating via Facebook with two American couples who were currently in Egypt, I peppered them with questions.

How safe did they feel and about their experience seeing the wonders of Egypt without the crowds?

With the only requirements to come to Egypt – a Passport, VISA, and a negative COVID PCR  test within 96 hours of entry, I was onboard.

From that point on, it was “Game On” and I was ready to go.

But even with my extensive experience traveling solo,  I recognized there would be challenges tackling the customs, language differences, and culture of Egypt.

During these times, I knew I needed the safety and reassurance of a reputable tour operator.

In a flash, I had booked my flights and lined up a private tour with an Egyptian travel company that arranged a custom itinerary for me, complete with an Egyptologist guide to accompany me.

Within a month of that first online discovery, I was winging my way to Cairo.

My trek to the Twin Temples of Abu Simbel was one of my most extraordinary experiences in Egypt.

Reigning for 67 years, Ramses II was one of antiquity’s most powerful rulers.  Of all the pharaohs, he was the most prolific builder.

Ordering the two temples’ construction just after his fifth year as Pharaoh, it took almost 20 years to complete.

The Abu Simbel Temple celebrates the victory of the Egyptians in the Battle of Kadesh against the Hittites.  Many carvings show Ramses enemies in

bondage, meant to create fear in Egypt’s enemies and impress and intimidate their southern neighbors, the Nubians. 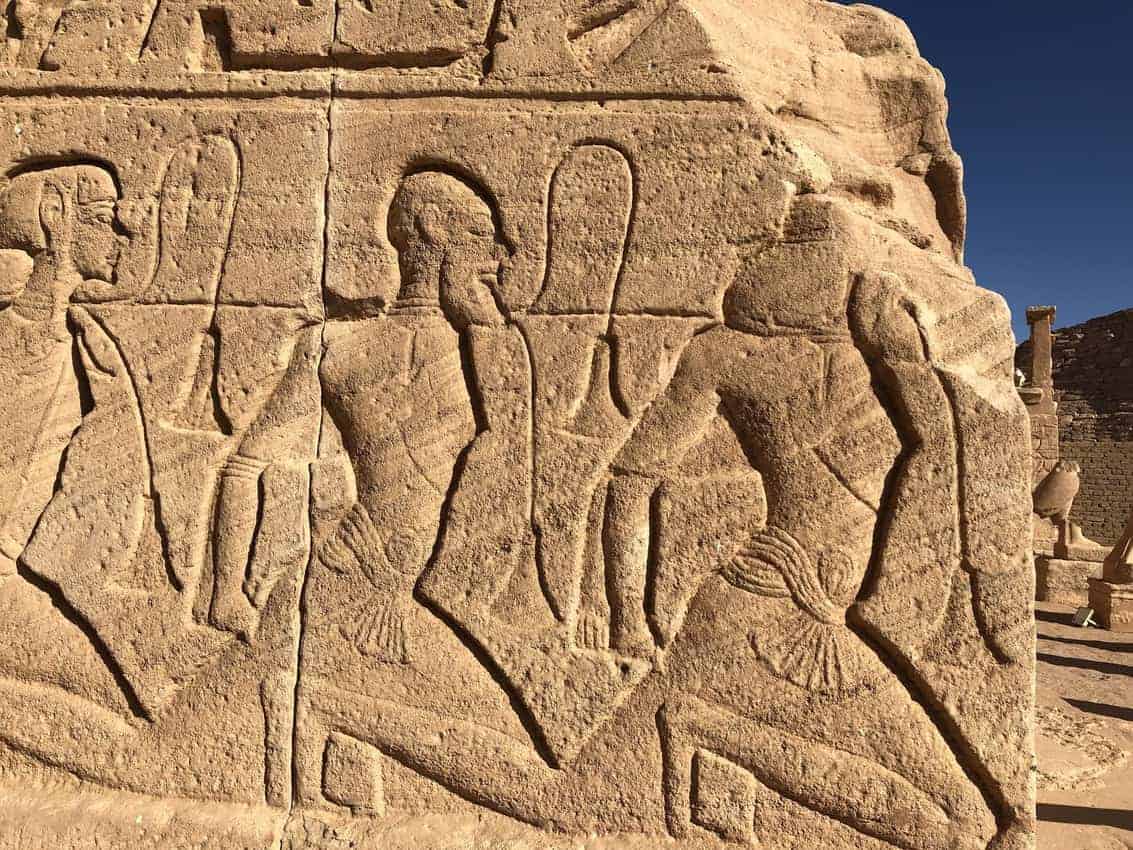 To glorify his name, Ramses II directed dozens of imposing temples and monuments along the Nile. Still, the rock-cut Abu Simbel stands out from all the rest.

Dedicated to the gods Amun, Ra-Horakhty, and Ptah, and the deified Rameses himself,  the outer façade originally consisted of four mammoth colossi, each 70 feet high, of which only three remain intact today.  The broken colossus lost its head in an earthquake in 27 BC.

Each of the seated statues at the entrance depicts this legendary ruler wearing a headdress, kilt, false beard, and donning a double crown representing Upper and Lower Egypt. Each has a carved vertical cartouche on its right arm, indicating  Ramses II’s royal name.  Only worn by  Pharaohs, their cartouche’s oval shape protected them from evil spirits in life and after death.

A carved statue of Ra-Horakhty adorns an exterior wall niche directly over the Temple entrance, also referred to as the Rising Sun’s God.  Its falcon head is topped with the solar disk, representing the rising sun. At the top of the front façade sits a row of 22 carved baboons, with arms raised, associated with the god of wisdom.

Ramses II wives, mother, and children are represented in smaller statues; even so, they are still larger than life-sized!

Inside the Temple is a large and spacious hypostyle hall, supported by Osiris shaped pillars cut in the rock.

The eight massive Osiris statues depict the deified Ramses II link to the God Osiris, the God of the afterlife, describing the everlasting nature of the Pharaoh.

These hall walls are decorated with battle and offering scenes, all designed to show Ramses II’s might and power; my favorite is Ramses riding in a chariot in action.  At the Temple’s end is the innermost sanctuary,  a sacred place that only the priests would enter.

Nearby, a smaller temple was dedicated to Hathor, goddess of women, love, and fertility, and honors Ramses’ beloved wife, Nefertari.

The façade has six standing colossi; four of them depict Rameses II, the remaining two represent the queen Nefertari.

Two smaller figures of their children accompany each.  The entrance leads to a square hall supported by six Hathor-headed pillars decorated with scenes depicting the king and queen making offerings to the different deities, many of which have retained their beautiful colors.

Over time, the temples fell into disuse, eventually becoming covered by the desert sand and ultimately forgotten.  In 1813,  Swiss scholar, Johann Ludwig Burckhardt, found the main Temple’s top frieze while traveling down the Nile.

After Burckhardt told his friend, Italian explorer Giovanni Belzoni, about the discovery, Belzoni joined him at the site to help with the preliminary excavation. Despite all their efforts, the two were unable to excavate down to the Temple entrance.

Abu Simbel, however, was not the original name given to the site by the ancient Egyptians. Many believe that Abu Simbel was a young local boy who had seen the buried temples through the shifting sands and guided Burckhardt to the site.

Four years later, Belzoni returned and continued to excavate the area, naming it after the boy who discovered the Temple and led Burckhardt. Unfortunately, whatever the ancient Egyptians called the complex has now been lost.

When work began at Abu Simbel in 1264 BC, the temples were more than 200 feet lower elevation from where they now stand; carved out of a mountainside along the Nile River.  But the formation of Lake Nasser—necessitated by the Aswan High Dam’s proposed construction in the 1960’s—threatened to destroy them.

Because of public outcry worldwide, the Abu Simbel temples’ salvage began in 1964, led by a multinational team of archeologists, engineers, and skilled heavy equipment operators working together under the UNESCO banner.

The temples were painstakingly cut into blocks as heavy as 20-tons and reassembled in their new location, one of the most significant archaeological engineering challenges in history, at the cost of more than 42 million US dollars.

One exits the temple complex by a different path, taking 5 to 10 minutes to walk back to the visitor’s center, restrooms, and parking lot, a good time to utilize the clean, modern bathrooms before the long trip back to Aswan.

Walking through what would usually be a gauntlet of vendors with all manner of trinkets, souvenirs, books, scarves, shawls to sell to visitors, it was so sad to see that most were closed.  The few open vendors didn’t have the heart to call out with enthusiasm, given the few foreign faces to hit up – it was not a high-pressure sales event.

Cell Photography is allowed in the temples at no charge.

Getting to Abu Simbel

The Temples are about 180 miles from Aswan, not far from the border with Sudan.  An out-of-the-way destination, most often experienced as a day trip from Aswan.

80% of visitors get to  Abu Simbel from Aswan by driving.  Hiring a private car or a minibus,  prearranging a tour from the reputable tour operator, your hotel, or Nile River Cruise Operator are all good options.

My visit to Abu Simbel was organized by tour operator  Egyptoria in a private vehicle, requiring two drivers (one as a back-up for longer journeys) and the addition of a military escort accompanying us in the coach.

Security of foreign visitors is of utmost importance to the Egyptian Government.

The drive to Abu Simbel took about three hours, with one rest stop along the way;  I spent the drive time listening to my Egyptologist guide, Zezo, share his considerable knowledge about Abu Simbel’s history.

The highway leading to Abu Simbel is a long ribbon of asphalt in a flat desert landscape as far as the eye can see, with a few military and police checkpoints.  We departed Aswan at 4 AM, traveling in a convoy, the vibrant sunrise over the desert horizon one of the long journey highlights.

The 9-hour road trip is less expensive than flying, with approximately three hours at the temples, but exhausting.

The fastest and easiest way to get from Aswan to Abu Simbel is a 45-minute  flight, including a free shuttle bus to take you to the Temple Complex.  Check with your hotel, tour operator, or Egypt Air for more details.  Egypt Air has a least one flight per day, depending on the season and demand.

The R/T cost is around 250 to 300 US-Dollars. Flying to and from Abu Simbel is more relaxing but expensive, and a bit rushed, allowing only 90 minutes at the temples.

Abu Simbel considered the grandest and most beautiful of the temples commissioned during Ramses II’s reign and Egypt’s most beautiful.  The secluded site still awed and generated the same sense of wonder, leaving one to ask, “how did they do that?” Abu Simbel’s one-of-a-kind Temples remains a must-visit.  All in all, it’s worth the long day trip from Aswan.