One Couple’s Culinary and Cultural Pilgrimage

Excerpt from the book: Chapter 1 – A Calling

About the authors: Independent travelers, Neville & Julie, have wandered to many places, including Europe, Australia, New Zealand, and Southeast Asia. They seek out destinations where they can enjoy and appreciate the culture, cuisine history, and traditions.  In An Italian Odyssey: One Couple’s Culinary and Cultural Pilgrimage

they tell their story.

In 2007, they hiked the 750-kilometer (485-mile) Camino de Santiago in Spain. Their latest work is about walking the Via Francigena from Switzerland to Rome, about 1,000 kilometers (621 miles) and sampling the cuisine in the five regions of Italy that they passed along the way.

That was the only rational conclusion we could arrive at when we found ourselves standing on a long dirt track, surrounded by farmland that stretched into infinity. We spun around 360 degrees; not a single person in sight. Neville consulted his maps.

“What are we doing and where are we?” I asked.

We had left the Abbazia di Chiaravalle della Colomba in the tiny commune of Alseno, walking along a quiet gravel road and expecting to follow signs that would point us toward the Via Francigena. But as we followed the road further out of the village, we noticed that the official route crossed a busy highway overpass.

“This doesn’t make sense,” Neville reasoned. “The signs point north, but we want to go southeast.” He pointed to his homemade maps. “We have to go this way.”

Frustrated, Neville mapped out an alternative route, following a series of faint, crooked lines that were the demarcations of farmland. “To hell with the official route; we’ll ‘farm whack’ our way to Fidenza,” he announced.

There we stood, surrounded by empty, dirt-brown farm fields, with rain clouds brewing on the horizon. I felt suddenly alone and lost. I hoped we would get to Fidenza before dark.

I was worried about where we would sleep that night. I had phoned earlier in the day to book accommodations, but could not reach anybody. And by now, I was hungry, so I also worried if we would even find a place to eat in Fidenza.

“So whose crazy idea was this anyway?” I asked Neville accusingly. “What have we got ourselves into?”

Since the day we met, Neville and I had always been what I would call modern-day travelers. Neville, born in Australia, had assimilated some of that Australian aboriginal spirit. He was always ready to go on a “walkabout.”

As for me, I read about solo women travelers and dreamt about being one of those adventurous women who traveled “off the beaten track.”

To satisfy our wanderlust, in the early 1990s, Neville and I backpacked for almost a year, taking planes, trains, and buses, and at times hitchhiking our way around the world. As we got older we continued to travel, but our travel escapades had become less exotic; more planned and predictable.

In early 2007, determined to reignite our spirit of adventure, we hiked the famous Camino de Santiago in Spain.

The Camino is an old pilgrim trail that snakes across the top of Spain, ending in Santiago de Compostela some 780 km later. Regardless of religion or beliefs, for many the Camino has a certain magic that leaves a lasting impact.

It certainly did for us.

It was on the Camino that I met Alex and his wife Lola. They are owners of Fresco Tours, an adventure travel company based in Bilbao, Spain, that provides guided walking tours on the Camino. Alex gave me the impression that there was another “camino” in Italy.

Once back in Canada, I soon learned the other “camino” in Italy was called the Via Francigena, a broad network of trails originating in ancient Francia (now France) and part of the backbone of a string of Roman and medieval roads leading to Rome. Via Francigena meant the “way of the Franks” and was used to describe the route that people living in Francia would take to get to Rome.

From Francia, pilgrims would cross the Alps, enter Italy at Gran San Bernardo, and travel south through the Valle d’Aosta. They then journeyed along a series of medieval paths, passing through the western reaches of the Po River valley.

Near Parma, they would head southwest, over the Apennine Mountains, crossing into Tuscany, toward the coastal port city of Luni, and from there they would continue south through the walled cities of Lucca and Siena and enter the region then known as Latium before finally arriving in Rome.

In the year 990, the English Archbishop, Sigeric the Serious of Canterbury, went to Rome to receive the pallium (religious garment) from Pope John XV. On his return trip to England, he recorded the route he took, providing the first written documentation of the Via Francigena.

For the next few months, Neville sought to find out everything he could about the Via Francigena. He read about the trail’s origins and about explorers and emperors who had traveled the route, including Charlemagne, Napoleon, and Hannibal. He discovered there were Etruscan, Roman and medieval sites along the route.

“It’s fascinating,” Neville would periodically exclaim, as he continued to enlighten me about his discoveries. “Can you imagine walking through Italy? Just think of the history. And all that great food and wine — you’d like that.”

What most excited me was the diversity of food and wine in the five regions of Italy that the Via Francigena passes through. From Neville’s research, I learned that Switzerland and France influence the cuisine of the distinct region of Valle d’Aosta, a small French-speaking corner of northwest Italy.

The rice capitals of Europe, Piedmont and Lombardy are located in the Po River valley. Here you find risotto dishes such as panissa — a typical risotto from Vercelli, salame d’oca — goose salami from Mortara, and Risotto alla Certosina from the Carthusian monastery of Certosa near Pavia. Piacenza is a center for salumi such as Coppa Piacentina DOP, and bacon known as Pancetta Piacentina DOP.

In Emilia, you find Prosciutto di Parma DOP, Italy’s best-known meat, and Parmigiano-Reggiano DOP, the king of cheeses. DOP means Denominazione di Origine Protetta, or Protected Designation of Origin, a product from a specified region that is made using defined methods and that satisfies a defined quality standard.

Further south, as the Via Francigena crosses the Apennine Mountains and enters the remote and tiny region of Lunigiana, the local cuisine includes dishes made with chestnuts (castagne) and wild game. Traditional foods include herb cakes called torta d’erbi, lasagna bastarde (lasagna made with chestnut flour), lamb from Zeri, flat bread served with pesto and local cheese called testaroli, and wild boar (cinghiale).

Further south is central Tuscany, home to fava, toscanelli, and cannellini beans, as well as pasta dishes such as tagliatelle, homemade wide-ribbon pappardelle, and “rustic spaghetti” called pici, all mixed with large amounts of extra virgin olive oil. Other popular dishes include wild game such as rabbit, pigeon, duck, thrush, and pheasant.

Finally, entering the region of Lazio, the Via Francigena circles the old volcanic Lake Bolsena. Here they serve fish soup called sbroscia, as well as coregone — a lake salmon eaten roasted or boiled and served with different kinds of sauces. Another common dish is eel, typically fried and pickled with herbs and spices.

“I think we should walk the Via Francigena,” Neville finally told me one day. “You know I love to walk, I’ll go anywhere, any time,” I replied.

Nevertheless, I thought, at the time, that it was one of those passing suggestions that we don’t always act on. However, the more Neville told me about the Via Francigena, the more intrigued I became.

“But there’s one thing you ought to know,” I told Julie one day. “We’ll have to make all our own guidebooks and maps. There’s no English documentation on the Via Francigena. We can’t walk into our local bookstore and buy a guidebook, like we did for the Camino de Santiago in Spain.”

In early 2008, I concluded that we could walk from Switzerland to Rome, about 1,000 km, in roughly 50 days. This amount of time factored in extra days for visiting some of the historic cities and sites along the route. We also decided that we would make this a cultural and culinary walking adventure through Italy, much like the Camino in Spain but with a larger focus on food and history.

I merged and translated the information I had collected on the Via Francigena. The preparation included creating homemade guidebooks, a painstaking procedure that involved downloading Italian documentation from the Internet, translating the information into English, and repackaging it into a booklet-style personal guidebook.

For each stage, I included the number of kilometers, the walking time, the change in elevation, the type of terrain, and the level of difficulty. I found and downloaded a series of rather dated topographical maps, 300 in total, and repackaged them into two booklet-style map books.

They were not the best, but at least I could make out the names of the towns and villages and see the various demarcations and shadings of black that represented a road, a cluster of buildings, or farm pastures.

I also made an accommodation guidebook with possible places to stay along the route. Finally, with Julie’s assistance, I created a cultural and culinary guidebook, identifying the typical and traditional foods and beverages found in each region we would pass through. This would be Julie’s specialty. As a self-described “foodie,” she was always keen on trying, and learning about, as many different culinary delights as possible.

After assembling all the information, I told Julie: “It’s not going to be easy. Many sections are unmarked, and along some sections, especially in the north, it’s dangerous to walk and one should take the bus. The terrain and the changes in elevation will be more demanding than on the Camino in Spain.”

“Are you sure you want to do this?” I asked her.

“Yes. Walking the Via Francigena is just the kind of journey we’re looking for,” she replied.

She was right. It made perfect sense. The Via Francigena offered all the basics of a great adventure. We could explore Italy’s Etruscan, Roman and medieval history, experience first-hand Italy’s modern-day culture, and enjoy the fine foods and wines for which Italy is so famous.

“You couldn’t ask for anything better,” we reasoned.

By midsummer, however, we were both a bit concerned. We weren’t sure we had everything figured out or that this would work as expected. But underneath any misgivings, there was something bigger, a force pulling us, and we decided we were ready to embark on what we expected would be the cultural and culinary “camino” of our lives through Italy.

We heard the call and we heeded it. 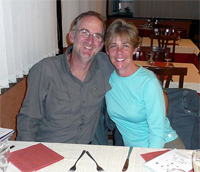 Independent travelers, Neville & Julie, have wandered to many places, including Europe, Australia, New Zealand, and Southeast Asia. They seek out destinations where they can enjoy and appreciate the culture, cuisine, history, and traditions.

Buy this book on Amazon: An Italian Odyssey: One Couple’s Culinary and Cultural Pilgrimage