First, You Shave Your Head 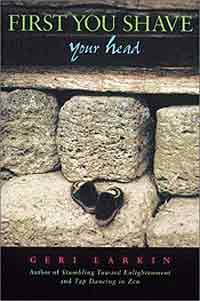 Join Geri Larkin on a spiritual pilgrimage through the Buddhist monasteries of South Korea, a place many will never travel. It is considered an honor to be invited into a world in which the culture has remained so unaffected in thousands of years. In fact, she was the first Western woman to be so honored.

Her personal odyssey of self-discovery, First You Shave Your Head, is a hilarious and honest chronicle of her journey. As an ordained dharma teacher in Ann Arbor, Michigan Larkin brings an enlightened, yet virgin approach to the life lessons of Buddhism.

I will get by on no more than five hours of sleep each night. I will have to maintain silence throughout the waking hours of each day. I will be wearing the same clothing for thirty days and nights.

I won’t be allowed to wash except on a bathing day. I will be carrying all my own gear plus about twenty pounds worth of my master’s books up steep mountains along impossibly narrow trails on foot in Keds because my shoes have to be leather-free. I will have to shave my head just when I’ve finally learned to French braid my hair without help. Oh boy!

Here’s the pattern: At three or four in the morning depending on whether we are in the city or the country, we hear the moktak. A quick rush to the bathroom, fold up our bedding, no need to get dressed since we already are.

Quickly walk to the meditation hall. Figure out where the heck we’re supposed to stand — it’s different in each place. One hundred and eight prostrations. Then, dripping in sweat, we chant Yebul, always beautiful, and the Heart Sutra, always confusing.

On to Sunim’s room. One prostration followed by a lecture. Then breakfast: rice, soup, six side dishes (spicy vegetables), and, if we’re lucky, some form of protein, maybe tofu, and sometimes little black beans. Then to the bathroom to rinse our faces and hands, brush our teeth, and we’re off! Sometimes we visit a monk and Haju, Kaeo, and I sit for one to two hours (arg!) while he and Sunim chat in Korean. Our bottoms on hard floors. No cushions. In half lotus.

I’m usually trying not to grimace within the first forty-five minutes. Keeping my back straight. Only flashes of concentration make it through the muscle spasms that come from not moving. Usually, we are offered green tea, occasionally coffee. The nuns always give us pine needle tea. Yesterday it was definitely alcoholic — I could feel the buzz. Made it easier to climb though.

After the house of sharing it was an emotional relief to return to downtown Seoul to stay in a Buddhist temple with monks. In the city monastic days begin at 4 A.M. with the sound of bells, gongs, and a big carved wooden fish.

In the country, drums are heard to the “Good morning Korea!” sound. Whatever the instrument, they are whacked hard so that all sentient beings within hearing distance know it’s time to start the day. Each of the sounds is aimed at a particular audience. The drum’s job is to wake up animals. Large bells call to anyone who has “become decadent” or given in to his or her own version of anger, greed, and/or delusion. I noticed the bell sounds the most. The wooden fish call to all who live in water and the gongs call to beings who live in the air. No one is left out.

There is a wonderful Zen teaching that summarizes another role for the different sounds: One day the seventeenth patriarch was walking with one of his students. Suddenly he turned to the young man. “What is ringing, the wind or the bells?”

The Zen master looked at the student: “This is really true. What is ringing, the wind or the bells, or both? Whatever we say it doesn’t hit the mark. So finally we find a solution, that the mind is ringing. This is very true, but still, there is a question. What is the mind?”

To this question, the disciple replied, “Tranquility, imperturbability;” seventeenth ancestor was really pleased with this answer.

Hmmmmm. Bells? Fish? Gongs? Drums? Forget drumming. Drumming when you are crawling around on your hands and knees in the dark in a completely foreign room, trying to remember where you put your glasses just before you fell asleep four hours ago (assuming you got that much sleep). Trying-not-to-squish-ants practice takes precedence over any enlightenment experience. Especially when your under-the-breath curse that happens when you crawl over your glasses can be heard two rooms away.

Excerpt from First You Shave Your Head, copyright 2001 by Geri Larken. Reprinted by permission of Celestial Arts, P.O. Box 7123, Berkeley, CA. Find out more about this book and other titles at its website.

Click On This Link To Buy This Book From Amazon