Cyprus: Motorbiking Through the Land of the Gods

Our swanky motorbike glints in the sun as we stand on a cliffside admiring Aphrodite’s Rock immersed in a sparkling sea. White foam rises then crashes onto windswept shores of Petra tou Romiou, Aphrodite’s birthplace, as it has for centuries.

This is one of the most stunning vistas in all of Cyprus, merging Greek mythology and Cypriot folklore in a single breathtaking moment. A sun-kissed island in the Mediterranean Sea with a checkered past, Cyprus is a treasure chest bursting with ruins of the antiquity and is the only country in the world with a divided capital, Nicosia.

The husband and I have decided to cover Cyprus on a motorbike. Traveling light, we make our way past the gardens of Limassol where each year a flower festival and a carnival get both inhabitants and visitors together for some fun.

People saunter, jog or laze by the beachside in this bastion of Cypriot culture while others tour the Medieval Museum in the old square of Limassol. The labyrinth of restaurants, boutiques and souvenir shops are a big draw.

The buzz and dynamism of Limassol is evident in its museums, restaurants and street side cafés. For a scrumptious Cypriot meal of Meze, try any one of the restaurants located around the castle area. Meze is a starter that can also double as a main course and arrives as a platter of small bowls of olives, salads and dips, followed by bite-sized hot kebabs and breads; Meze looks deceptively small but can fill you up surprisingly fast.

Hopping onto our motorbike, map in hand, we make a scheduled stop at Kurion, a rich historic site perched on a rocky cliffside with one of the most spectacular amphitheatres on the island. Situated approximately 19 kilometers west of Limassol, Kurion was built in the 2nd century BCE and is used to the present day for musical and theatre performances.

Sitting under large protective tents, the community baths and well preserved mosaics look out onto enviable views of the sea. If you follow the coastal route to the east of Limassol you will most likely stumble upon the ruins of Amathus, one of the ancient city kingdoms and definitely worth a short stop.

We head west towards Paphos where more ruins and ancient amphitheatres await. With more pillars, tombs and mosaics to shake a stick at, this southwestern city makes for an interesting day trip. A castle sits at one end of the Paphos harbour, a few meters away from a bounty of well preserved mosaics.

Paphos is divided into the Old and the New. While New Paphos is more trendy with a street full of nightclubs, Old Paphos is where you should be if you deem yourself a history hound. Take the main road through Paphos and you cannot miss the signs for ‘Tombs of the Kings,’ a complex of burial caves.

Carved out from rocks of the hill and decorated with Doric columns that date back to the 4th century BCE, visitors are welcome to stroll around the tombs during daylight hours.

After spending a day around what used to be Cyprus’ capital for nearly six hundred years, it is quite plain to see why the entire city is a UNESCO World Cultural Heritage Site.

Paphos has enjoyed another tryst with history, a more romantic one – its lasting love affair with the beautiful goddess Aphrodite. Nowhere is this more obvious than at Petra tou Romiou, birthplace of this goddess of love and beauty.

Aphrodite was supposedly born out of the foam of the sea at this spot, 25 kilometers from Paphos, making Petra tou Romiou a must-see on any visitor’s itinerary and no trip to Paphos is complete without a stopover at the Baths of this famed goddess.

Located in a small hillside of Polis 48 kilometres north of Paphos in the untouched Akamas Peninsula, this tiny shaded grotto is where Aphrodite indulged in languorous beauty baths and secret assignations with her lover.

The port of Latchi nearby is a great place to relax and to practise scuba diving within the safe confines of a sea lagoon. For the more adventurous, the wreck of Dhimitrios will provide exciting diving opportunities. Having the motorbike at our disposal gives us the freedom to stop and admire gorgeous coastlines at our own pace.

Lying within the heart of the island are the Troodos Mountains. Although these rocky slopes are carpeted with thick juniper, pine and cedar trees, sunlight does filter in through the tall branches and leaves. Nature trails weave their paths through thick forests offering spectacular views of Byzantine monasteries, winemaking villages in sundrenched valleys and Greek orthodox churches perched on mountain peaks.

A cool sanctuary in times of the island’s summer heat, the natives seek relief by camping in the forests of the Troodos. Leaving our two-wheeler behind we hike down the Caledonian Trail, one of four major trails within the Troodos.

The village of Omodos at the foothills of the Troodos is picture-postcard and the beloved Monastery of Stavros is its pride and joy. It is also the centre of attraction although the village itself scores in the ‘quaint’ department. Past the village square, an old lady sits at the door of her shop surrounded by intricate lace handiwork.

Interestingly as we stroll up, down and through the village, the crisscrossing serpentine lanes seem to echo the fine lacework adorning the shop walls. Inside the old monastery, religious icons look down from their carved wooden frames as a ray of sunlight bounces off gold patterned panels.

Essentially a wine-producing village, Omodos contains a restored wine-press among old houses that seem to have stood the test of time. This village is blessed with plenty of sunshine, charming tavernas and beautiful mountainsides

While a visit to any village or church around Cyprus is filled with the promise of good things, Kakopetria is quite touristy, though in a nice way. Spread over the Troodos valley like frosting on a cake, Kakopetria boasts an old quarter that is both picturesque and charming. We stop to look at a former watermill turned hotel on the banks of the river that runs through the village.

Perhaps the most famous church in this area is the Ayios Nikolaos tis Stegis or St. Nicholas on the Roof. Sitting five kilometers away from Kakopetria village, this particular church has the distinction of being one of the most interesting of all Byzantine churches in Cyprus.

Within the Troodos region there are nine churches and one monastery that are UNESCO World Heritage Sites. Kykkos Monastery is the most well known in this area and well worth a visit.

Founded in the 11th century the monastery is richly decorated in gold and is surprisingly ornate. Visitors, both men and women should dress modestly keeping in mind the chaste lifestyle of the monastery’s inhabitants. Frescoes adorn the outside walls beside the main entrance to the monastery, rich in detail and very well-preserved.

If there ever was a city that till today carries battle scars of a turbulent past, Nicosia is it. The scene of extreme violence, Nicosia was invaded by the Turks in 1974 and a section of the city has been cordoned off as a United Nations buffer zone since then. Bullet holes riddle the walls of bleak buildings as grim looking guards stand on duty at the barb wired outpost.

Having parked the bike just outside the 16th century Venetian walls, we take to the cobblestoned paths in an effort to learn more about this fascinating city. Capital of Cyprus since the 11th century, old Nicosia is made up of timeless medieval churches and museums.

Just outside of the old city lies a modern Nicosia, one almost entirely concretized into a business hub and a bustling city center. Being history buffs, we cannot seem to get enough of Old Nicosia and are sad to leave it behind.

As all good things must come to an end, for us, all roads now lead back to Limassol and to the owner of our beloved bike.

Getting Around Cyprus on a Rented Set of Wheels

Motorbikes can be hired from any Cypriot city. Hiring a bike for cross country trips will set you back by approximately Euros 50 per day including insurance. 15% VAT, fuel, traffic fines and parking fees are not included in these charges.

Usually rental companies will provide a 24-hour emergency service and insurance for anywhere in Cyprus except the Turkish-occupied northern territory.

Driving licenses from any foreign country are valid in Cyprus, and traffic keeps to the left side of the road. Finding parking is generally not an issue around the island. Most tourist sights have designated parking spaces.

A few rental companies are listed below. 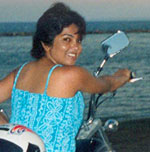 Andrea Bailey is a freelance travel writer based in Dubai.