A Spectacular Adventure by Rail Covering the Length of India

I knew that traveling India’s countryside from Mumbai to Goa would be a journey of the mind as much as the body. I took a luxury train called the Deccan Odyssey that took me the whole length of India.

The sights and sounds that this ancient country offers are breathtaking, complete with century-old forts and an enigmatic culture steeped in time.

Add to that the chance to experience a train built for royalty winding through the countryside and stopping at small towns while allowing travelers to revel in the traditional way of life found only in this part of the world. The romance of it all couldn’t be sweeter.

As Nice as the Blue Train

The Deccan Odyssey is India’s addition to the tourist market and it is every bit as luxurious as the Blue Train of South Africa, the Orient Express of Europe and the Eastern and Oriental of South East Asia.

Three years in the making, the Deccan Odyssey is a dark blue affair highlighted with gold stripes. The coaches are named after well-known forts, monuments and sites throughout India and they are names you will become familiar with on your eight-day journey.

The Deccan Odyssey travels up to 60 miles per hour as it coils its way through Maharashtra beginning in the famously well-known city of Mumbai (formerly Bombay until 1976) and ending up in the very Portugal-influenced Goa.

Following Goa the Deccan Odyssey turns around to head back to Mumbai via an entirely new route away from the coastline. It’s the small towns and beaches as much as the impressive large cities that will allow you to see an India that most travelers are not afforded the chance to experience. 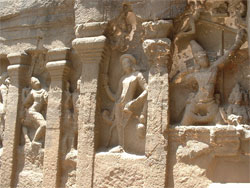 So it was day one of my journey that I found myself in Mumbai. Mumbai is known for many things, but the most important at the moment seems to be Bollywood.

While it’s not Hollywood, CA., you can still find India’s version of its well-known celebrities plastered on row after row of billboards. Mumbai has a modern feel; it’s relatively new in many parts with a modern architecture accentuated by old-world gothic-style buildings.

It wasn’t until the evening that we boarded the Deccan Odyssey, treated to a local Indian dinner and waiting for the journey to properly get started. For the most part, the train traveled in the evening and stopped during the morning and afternoon for passengers to discover the ancient land.

As I awoke on day two I was treated to hot coffee and toast brought to me by my valet. Always attentive, each car’s personal valet is continuously on call and I remained surprised at how our valet always seemed to appear at just the right time whether it was my stopped-up drain, my lack of hot water or even the afternoon when I locked myself inside my cabin.

Like magic, he was there to fix the problem and he did it with a smile, although I couldn’t help wondering what he was thinking behind his friendly façade.

Day two was a welcome ceremony in Ukshi station, mountains, and backwaters calling us onward as we were taken to Rai Jetty for a boat ride alighting on the other side at the famed 17th century Jaigad Fort. We also had the chance to experience the Konkan village, which is a must on your trip since there is no access via road or rail to this area of India.

We reveled in the opportunity to enjoy a Konkan lunch followed by rest and relaxation on the beach in Ganapatipule with the Arabian Sea as an enticing backdrop.

In the evening we were hurried back again to the comfort of our temporary home where dinner awaited and I gathered with my new friends from around the world to talk about the day’s adventure.

On day three the train stop is at the Sindhudurg Nagari station. Again, it’s a chance to see an India unvisited by most tourists. In fact, each morning when we arrived at a new destination there were hordes of friendly faces to greet us. People from miles away had traveled all night to arrive in time to witness the royal train as it stopped to pay a visit to an almost forgotten station nestled among the Indian countryside.

The temples here are dedicated to the Hindu gods and they stand as shrines years after they have been built, a gentle reminder of the native culture. It is here at the Fort of Sindhudurg that 6000 workers toiled day and night for three years to complete this massive structure.

The fort and surroundings are on 48 acres and are said to have been designed by Shivaji himself, a beautiful monument sitting right on the water—but surrounded by the rocky coastline that was penetrable by none but the most stalwart of boatmen.

Another famously executed beach lunch and an afternoon swim in the Arabian Sea calls after I have had a chance to look around the area of Tarkarli. The Konkani-style cottages are open and waiting for those who enjoy afternoon naps. From that point, we take a boat ride through the Tarkarli Creek to Kalse Jetty.

It’s about now that the passengers on the train are buzzing about tomorrow. Tomorrow is Goa. Goa seems to be larger than life to those of us who have not been there. The Brits are especially excited, but one couple comments it’s a bit overrun with tourists. Nevertheless, we wait in anticipation of the morning’s embarkation.

As we arrive in Goa most of the passengers are taken with the overpowering sights, sounds, and smells. Indeed, it feels like a little piece of Portugal in this remote part of the world. Bougainvilleas hide whitewashed houses and tiny alleys with the occasional stray cat beckon. The native’s smile and wave, they are well versed in the tourist trade and know how to make a visitor feel welcome.

For the most part, I explore Goa alone losing the group on purpose in order to get a feel of what it is that everyone has been talking about. The churches we are taken to on the first stop are impressive, but we all agree that you can do churches in Europe, besides these catholic churches feel somewhat odd in this country steeped in Eastern religion.

It’s a fact that you can’t miss old Goa and the Mangeshi Temple. I immediately decide that Goa is a good place to return in spite of my British friends’ warnings.

Who wouldn’t want to spend some time on the virgin beaches that are still waiting to be explored and spend the night in one of the small inns that are perfect for an inexpensive week-long stay? Not to mention that no matter where you visit in Goa you can always find shrines and shops just waiting.

As we push off that evening from the station we head to Pune, the well-known capital of Marathas. It’s here in Pune that we visit the Raja Kelkar Museum, a quaint little place with collections from the 17th, 18th and 19th centuries. While the owner realizes he has a gem of a collection, he is quite humble and welcomes visitors with a smile.

Many tourists find their way to Pune only to visit the world-famous Osho Ashram. While this is one place I would have been happy missing, it’s interesting to witness a cult in action. People from around the world come to live at the Ashram for day, weeks or months and, for lack of a better word, to find spiritual meaning.

It’s questionable if they find it, but once inside you do have the chance to dance all morning, eat all afternoon and take a large selection of metaphysical classes sometime in between. What I enjoyed the most was the shopping bazaar just up the street where I found an overabundance of Indian fabrics, purses and shawls to take home to America.

Day six found us in Aurangabad. It’s here that monuments, caves, and temples give way to the fortress of Daulatabad. The world-famous Ellora Caves beckon the visitor, it’s a well-known world heritage site representing a variety of religions.

Each cave is rich with the carvings of elephants, lotus, and lions while also giving the air of peace and tranquility not found in today’s modern world.

The following day is a visit to another set of popular caves called the Ajanti Caves. These caves were discovered by accident during a hunting expedition by a party of British soldiers. Buddha plays a large part in this landmark and we saw murals and sculptures of The Birth of Buddha and The Thousand Buddhas. There are also paintings on the ceilings depicting elephants, bulls, the black princess and a row of dancers with musicians.

On day eight we arrive back in Mumbai leaving the train early in the morning. Mumbai seems different now that we have explored the countryside and met the people. The smiles are the same, but as you journey through India, each day gives you a better understanding of what India really is from the inside out.

Deccan Odyssey offers 44 suites in 11 cars and a total of 21 coaches in all. The décor is highly appointed offering a rich interior reflecting the face of Indian royalty. You can expect air-conditioned rooms, foreign exchange facilities, a small health spa that offers a beauty salon, steam room and massage facilities.

The dining room serves a different selection every night and the chef is open to special orders. I know because he made me a fabulous pizza one evening upon request and I discovered he had been trained in Italy.

A trip to India is an experience that will awaken all your senses. I even made the front page of the local newspaper there during a colorful ceremony welcoming us one morning. However, my most fond memory is the afternoon I stood with friends in a crowded street and announced, “See the elephant walking down the street?”

Indeed, this elegant creature made his way toward us as my friend laughed and said, “How many times do you get to say that in a sentence.”

It’s true, but in India, you see it quite often. In fact, elephants are sacred in the country since Ganesha is one of the most revered gods. No matter what experience you will remember, you will soon come to understand that as you open your mind and senses you can be sure that this magical train ride through time will be with you long after you return home.

Jenny Coates, a press officer and freelance writer from Berkshire, UK, funds her travels by working as an animal artist in her spare time. For a portrait of your pet, visit pet-portraits-online.co.uk.

Stratford-upon-Avon, home of the Bard